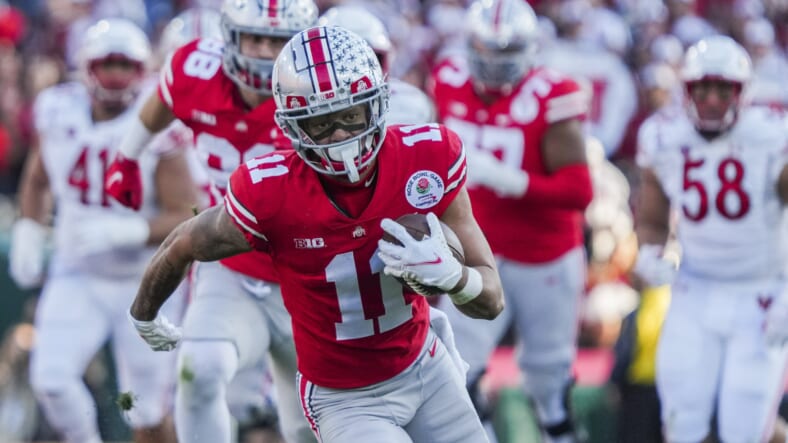 Jaxon Smith-Njigba is going into his third year at Ohio State. Smith-Njigba is arguably the best wide receiver currently for the 2023 NFL draft and one of the top projected prospects in the entire class. He was rated as a five-star recruit by 247 Sports, and ESPN had him as a four-star player out of high school. Smith-Njigba got his first opportunity to start last year and produced tremendously.

In 13 games throughout the 2021 season, Smith-Njigba recorded 95 catches, 1,606 yards (16.9 yards per catch), and nine touchdowns. He averaged a whopping 123.5 yards per game as a sophomore. Smith-Njigba had just three games last year with less than 90 receiving yards. He put together five 100-yard performances to end 2021, in two of those games, he recorded 240 yards or more. In his final game of the year, against Utah in the Rose Bowl, Smith-Njigba had 15 catches, 347 yards, and three touchdowns. He will play this season at 20 years old.

Ohio State WR Jaxon Smith-Njigba!
– Smooth operator from the slot, runs routes with good tempo
– Can create enough separation at the top of his breaks
– Catches the ball well
– Shows great vision and quickness in space as a runner after the catch
– Willing and fantastic blocker pic.twitter.com/3R2LA5W6Gw

Smith-Njigba works predominately inside from the slot receiver position. For an inside receiver, he possesses good size. One popular concern with Smith-Njigba is his lack of experience on the outside beating press coverage. Throughout the four games studied, he had a few reps on the outside against a cornerback tight to the line of scrimmage. Smith-Njigba proved some good footwork with his releases on those plays and an ability to get separation off the line of scrimmage. He showed a good understanding in terms of gaining enough ground working up to the cornerback to win. In particular, he displayed a couple of savvy diamond releases on slant routes against press cornerbacks with inside leverage.

Off the snap, Smith-Njigba is not the fastest in terms of both straight-line or long speed. However, he did prove that can pick up enough speed while moving to gain a step or more whether it be vertically or horizontally, on cornerbacks. There were a good amount of plays in which he had multiple steps on downfield routes.

Through his routes, Smith-Njigba showed some promising things. He can run his routes with exceptional tempo. He has some very impressive stop and start ability. From there, his short-area burst on breaks was evident.

Smith-Njigba was inconsistent in terms of fully committing to break steps at the top of his stem. There were reps he did a good job throwing his feet in the ground. But, there is still room for growth in terms of keeping himself under control and not overextending his feet at the top of routes rep to rep.

Working in the slot against off coverage, Smith-Njigba displayed an understanding of leverage working up to cornerbacks at the top of stems. He would typically leave himself adequate depth as well to minimize contact. Smith-Njigba did, however show good physicality and the ability to compete through contact when he had to.

As a route runner, Smith-Njigba showed he can smoothly sink his hips and keep his breaks flat. Overall, Smith-Njigba has short-area quickness and can routinely create separation for himself at the top of his breaks.

Hands and yards after the catch

Smith-Njigba displayed very good hands catching the football, especially on some passes thrown outside of his frame. On intermediate routes over the middle of the field, Smith-Njigba made some nice catches on low throws. He has the ability to adjust and pluck the ball when it is away from him. In traffic, Smith-Njigba has great concentration skills to track the football and reel it in. Also, he can work with his quarterback on extended plays and find space.

With the football after the catch, Smith-Njigba runs with both vision and shiftiness to gain extra yardage. He can read, quickly change direction, and ultimately elude pursuing defenders in space.

His lack of elite athletic ability will be a hold-up for some. However, he is by no means a bad athlete. His lack of elite speed and explosiveness are apparent. Still, Smith-Njigba is a smooth and quick operator who can change his direction with enough fluidity.

One of Smith-Njigba’s best attributes is his willingness as a blocker. His effort is always there. Technically, he showed the ability to set his feet, have his hands ready, and then place them. Without imposing size, his strength to sustain was not always present. However, he is still more than efficient enough in this regard. For a premier pass-catching receiver to have the approach, he consistently does as a blocker is telling about his team-first mindset.

The two most important traits to playing wide receiver, running routes and catching the football, Smith-Njigba has. He can gain enough speed to create the separation he needs. His quickness and nuance as a route runner in terms of pacing and understanding leverage will go a long way. What he offers as a willing blocker is exciting. Smith-Njigba will possibly be the best wide receiver prospect, and one of the top overall prospects come next year’s draft.