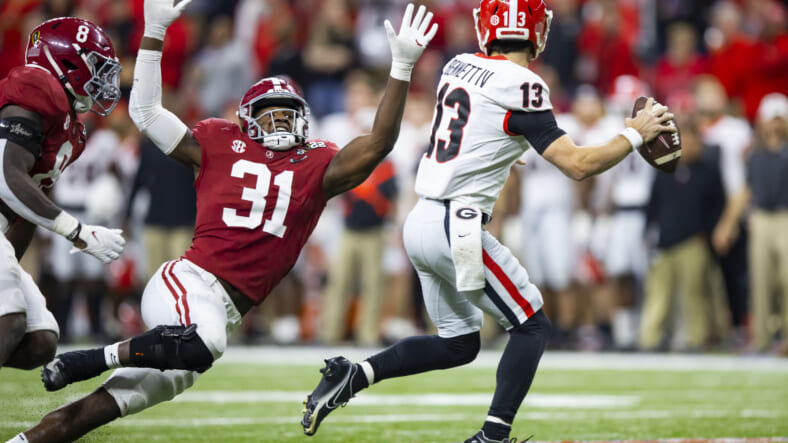 Will Anderson Jr. is a special edge defender regarded by most as the top prospect for the 2023 NFL draft. He was rated by 247 Sports as a five-star recruit out of high school and a four-star by ESPN. He joined Alabama in 2020 and has been incredibly successful throughout his first two years.

During the 2020 season, Anderson played in 13 games, recorded seven sacks and 10.5 tackles for loss. He was utterly dominant as a sophomore in 2021. In 15 games, Anderson had 17.5 sacks, 31 tackles for loss, and 81 pressures, one generational season, to say the least. His most notable performance in 2021 was his four-sack outing against Mississippi State. He also had three games last year with two sacks. Anderson will turn 21 years old early on in the 2022 season.

Anderson aligned as an edge defender and as a 4i-technique in some of Alabama’s odd three-man defensive fronts. He operated from two, three, and four-point stances in the five games reviewed.

When the ball is snapped, Anderson is very fast, starting with his explosive first step. From there, he also has great closing speed. He has the ability as a pass rusher to convert from speed to power. While rushing, the power at the point against a block that Anderson can generate is incredible. Against offensive linemen, he showed the ability to play with good leverage and place his hands properly. He will also keep his hands active through the rep. Lastly, Anderson has the play strength to ultimately disengage.

Building on his impeccable foot speed, Anderson is also quick. Off the snap, Anderson showed agility operating laterally when needed. He is a fluid athlete who can effortlessly change his direction in space. He had assignments where he had to drop in coverage, and he did so efficiently. Finally, as a pass rusher, Anderson does have flexibility in his lower half, enabling him to get low through his rush. Anderson is a terrific athlete.

Across the board as a run defender, Anderson is nothing short of special. He makes plays setting the edge, chasing sideline to sideline, and can crash down inside to finish a play. Anderson showed great instincts against the run, having a feel against delays as well as where runs were going. He exhibited patience as an unblocked defender and the ability to properly read and react. Anderson can diagnose with disciplined eyes. He is physical and willing to take on blocks and ultimately work through them.

Knowing his exceptional dominance as a run defender, it comes as no surprise that the motor Anderson consistently plays with is top-notch. He plays with fantastic effort in pursuit.

Whether rushing outside or on a stunt inside, Anderson displayed the ability to take clean angles on his corners to the quarterback. Anderson can play with more consistent power and strength when rushing over guards on stunts. His hands were also not always properly placed. He did show a feel for the proper timing to have working laterally on stunts and picked up some inside wins.

The few concerns with Anderson are his bend, initial pass rush plan, moves, and counter moves. He can be more consistent with his plan of attack to win even more, rushing the passer. With his power, he showed some long arms. Anderson had some hand swipes as well. He has the ability to win with speed and athleticism outside. He can add to his variety of moves even more, though.

The three-man front he lines up along as a 4i-technique in does hurt him at times as a pass rusher. The size of Anderson may never be imposing. Lastly, he can clean his rep to rep hand placement.

Anderson is rightfully so a top prospect for the 2023 NFL draft. His speed, quickness, athleticism, power, run defense, and effort are all terrific attributes of his game. Anderson should continue his dominance this fall.