Yankees ponder who will play first base, there are some bright prospects in the system 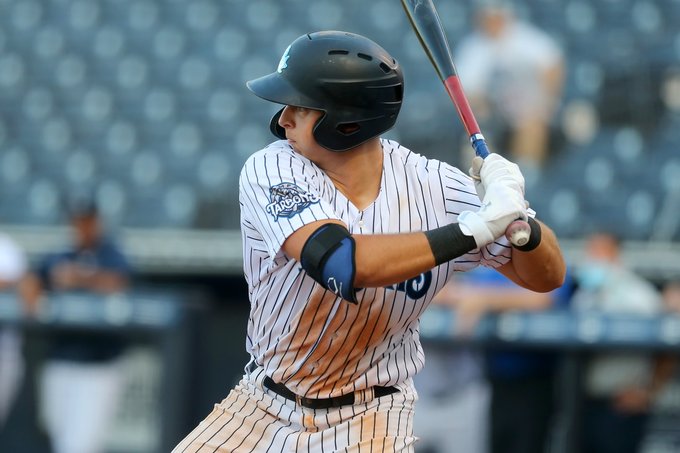 The New York Yankees announced a long while ago that they would get a new shortstop before the 2022 season starts. We don’t know if they will hire a star-like player to fill the position, or go the stop-gap avenue, while they wait for Oswald Peraza or Anthony Volpe to develop to the major league level. With all that publicity, little attention has been paid to farm system players who could make an impact at first base in the coming years. Today we take a closer look at those up-and-coming prospects.

During the last few years, it was assumed that Luke Voit would be the Yankee’s first baseman for years to come. That reality seems like a distant thought, as Voit has been unable to stay healthy, as well, his performance at the plate, other than 2020, has been disappointing. Although the Yankees held onto Voit for 2022, it doesn’t seem likely that he will be the starting first baseman. The Yankees are interested in Matt Olson and Freddie Freeman, among others, to fill the spot.

However, looking past the 2022 season, the Yankees have some exciting young prospects already in the farm system that look appealing.

One player who has really made progress last season and at Arizona in the fall league was Yankees’ Andres Chaparro. Although Chaparro has played a majority of the games at third base during his time with the Yankees, He became the first baseman when he was elevated to the Hudson Valley Renegades. Chaparro was selected to represent the Renegades in the Arizona Fall League. He also played first base there. He hit a combined .267/.381/.468 last season between the two Class-A levels. His pop drew eyes, which led to more power to add to his excellent plate discipline.

The Arizona Fall League seemed to be the catalyst for his new power behind the plate. Scouts took notice when he turned it on after a slow start. He started hitting for power while also hitting more frequently. Three of his hits were launched at exit velocities of 110 mph or higher. He slashed .353/.462/.686 in his last 61 plate appearances last fall.

When Chaparro was elevated to the Hudson Valley affiliate, the Yankees promoted Anthony Garcia from the Florida Complex League. Garcia was an outfielder when he signed with the Yankees and did not play any first base during his first two seasons, in 2018 and 2019. This season he was transferred to first base, a move that turned out to be productive as he hit well and put up some impressive numbers.

Garcia has always been known for his power, Garcia slashed a combined .306/.444/.678 with 14 home runs in 153 plate appearances. Garcia does have a glaring problem to fix before he progresses, and that is his strike-out rate. He has struck out over 30 percent of the time while in the minors. To make it to the big team, he will have to continue working on that less then desirable trait.

The Yankees selected Tyler Hardman in the fifth round of the 2021 draft, selected out of the University of Oklahoma. He led the Big-12 conference in batting average in his final season there, hitting .397 for the Sooners. His selection was the highest in the draft since 2001 as a first baseman. Before winning the Big-12 batting crown, Hardman previously won the Cape Cod League home run derby. Although his bat has not shown tremendous power, there is enough there to show the Yankees they may depend on future progress. Although he has played some third base, the Yankees see him as a first baseman.

The Yankees have something to look forward to. Chad Bell is a powerful left-hander. He slammed 21 home runs last season while rising from Low-A Tampa to Double-A Somerset. At the two Class-A levels, he posted a combined 138 wRC+. He does strike out more than the Yankees want but has also shown the ability to crush homers with power, making him a productive hitter. He will likely start with the Somerset Patriots again this season.

The Yankees also have some other prospects that are further away from the majors. Yankee fans should also keep their eyes on Connor Cannon and Spencer Henson, who are returning from injuries. Cannon was the player to be named later in the Mike Tauchman trade with the San Franciso Giants. Then there is Eric Wagaman, a player who made significant strides with in-season adjustments this past year. Wagaman has been a fixture with promise since he was drafted in 2017.