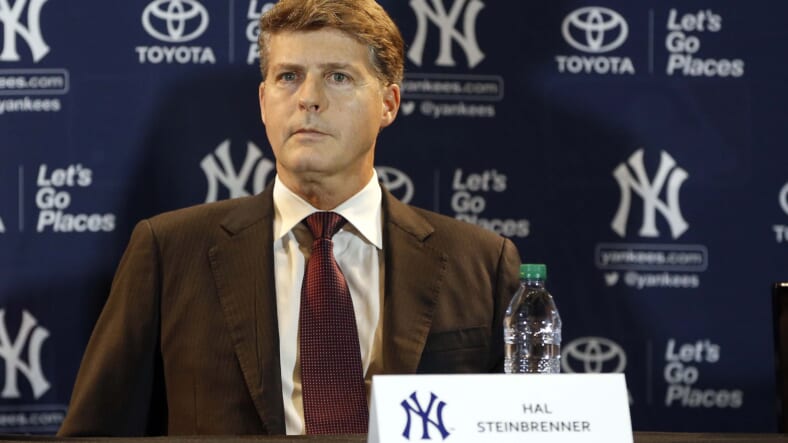 The owner of the New York Yankees, Hal Steinbrenner, has spoken a lot in recent days regarding the club’s offseason outlook and the potential budget. The bombers got off to a fast start this week re-signing first baseman Anthony Rizzo to a two-year $34 million deal with a $6 million buy-out and a club option for a third year at $17 million.

With Rizzo in the fold, it’s one box that the team can check off. Now, all the focus is going to the big fish, Mr. Aaron James Judge. Judge is set to win his first American League MVP award tonight. He is the darling of the offseason with some of the biggest teams in baseball preparing massive offers.

That being said, by all indications, the Yankees have the inside track here. Hal Steinbrenner has told the media that he believes from talking to Judge that he wants to be in New York. Steinbrenner also said that he’s fully prepared to do whatever it takes to keep Judge a Yankee for the rest of his life.

Something that says a lot is the fact that Steinbrenner has met with Judge multiple times just the two of them. No Brian Cashman, just Steinbrenner and Judge. Business the way the boss used to do it. Steinbrenner let Judge know how much he means to his family, the Yankees organization, and fans everywhere.

Steinbrenner also told Judge and has conveyed to the media that they will attempt to sign anyone they can to turn themselves into World Series champions. One of the big reasons that Steinbrenner is seemingly more aggressive is the fact that their revenues have gotten back on track.

The pandemic season caused a setback and many believe that’s why they didn’t go big last offseason. However, Steinbrenner said they are close to being back to normal. The Yankees are currently in a World Series drought that is getting close to the longest drought in team history.

Jon Heyman reported this week that the Yankees have been in touch with all the big time shortstops: Xander Bogaerts, Trea Turner, Dansby Swanson, and Carlos Correa. Could this be a contingency plan if they don’t sign Judge? It could be. Or, it could be something much bigger.

The Yankees could re-sign Judge then look to add someone like a Trea Turner. What about the young guys? Some think Anthony Volpe translates better at second base than at shortstop long-term. Perhaps, you move Volpe over to second to start next year at Triple-A, then you have Peraza as trade bate to go get another starting pitcher.

Peraza proved to everyone that he can play in the majors which does nothing but up his trade value. Turner is also a guy that could move to second base if they preferred to keep one of their prospects at short. The Yankees have options should they go that route.

Re-signing Judge and going after one of the bigger shortstops would make me think of the 2008 offseason where the Yankees went crazy by signing Teixeira, Sabathia, and Burnett. I would have to see it to believe it, but I feel like when Steinbrenner tells Judge that they want to go big, he means it.

My guess is that Judge will sign by the winter meetings and he will be the first big domino to fall. Once he does, the Yankees are still going to be extremely active in free agency regardless of Judge’s decision.