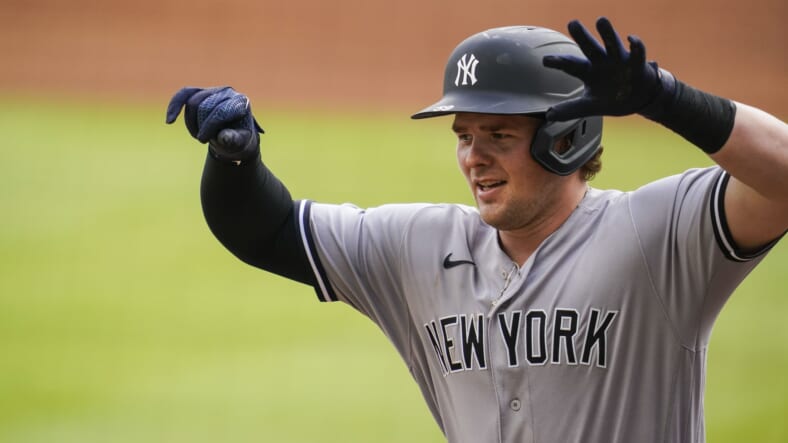 Coming into the 2020 season, expectations were high for this Yankees team. Having Stanton and Judge supposedly healthy was huge. High hopes for Gleyber and Gary were in store, and add to that, the addition of a full-strength Luke Voit. It looked like an almost guarantee that something was cookin’ in the Bronx. However, as everyone saw, 2020 was anything but smooth sailing and pure dominance. Stanton and Judge couldn’t stay healthy, and the team’s rotation & bullpen were inconsistent. The one positive throughout the course of the season was Luke Voit. Yet, Voit’s incredible year doesn’t have as many people sold as one would think. In response to his fantastic season, various articles and sites are saying Voit should be shopped this offseason.

Trading Luke Voit is not a great idea unless it brings back a front-end starting pitcher. Even then, it would depend on the contingencies around said, pitcher. Voit will be 30 this season, doesn’t hit free agency until 2025 and isn’t eligible for arbitration until 2022. The financial side to keeping Voit at first is clear, and I personally don’t feel as if there are any options internally or on the market nearly as capable. Not to mention that the age of 30 is well considered in the scope of a players’ prime, and it seems as if Luke is just getting started. Having a player on a team-friendly contract for numerous years, whilst producing well-above-average performances, is every GM’s dream. Voit fits that bill perfectly. For me, any idea of trading Voit for another offensive piece, regardless of who it is, should be dashed entirely.

The Yankees took a risk but saw what was there

Luke Voit hasn’t had it easy in his road to the majors. Despite showing great offensive prowess and bat speed, unfortunately, it didn’t lead to any concrete playing time back in St. Louis. The Cardinals already had a crammed infield, specifically 1B with Carpenter, Gyorko, and even Jose Martinez seeing reps from ’16-’18. However, his lack of MLB AB’s luckily didn’t deter the Yankees from acquiring him. Clearly, the Yankees saw something they liked, and based on his minor league numbers with STL, it’s not hard to see why: (info via Fangraphs) * = was called up

Voit’s career in New York has been exactly like that of his minor league stint, as he has been one of the best hitters on the team. If you take away Voit’s injured second half from 2019, he is, without a doubt, one of the best pure hitters in baseball. His defense will always hold his value back significantly, but Voit’s bat is more than proven. As soon as he arrived in the Bronx back in 2018, he switched it to another gear. Over 39 games, he clobbered 14 HR, OPS’d 1.095, and posted an astounding WRC+ of roughly 195. Luke Voit earned cult hero status amongst Yankees fans and heading into the 2019 season, there were high expectations.

Voit is one of the best in baseball

The last time a Yankees’ first baseman posted an OPS over .900 in back-to-back seasons in Pinstripes was pre-Mark Teixeira era, which goes to show how crazy it would’ve been. I’m not saying Voit is this generational talent that has never been seen before, but I am saying for Voit to be now included amongst countless hypothetical trades is, well, crazy. I understand the logic behind selling high, but to cash out on him now seems entirely nonsensical. Coming off the best season of his career, which followed up a very solid full first season in Pinstripes, why bail on his rise now? Add to that, trading Voit doesn’t do any good when there is no immediate replacement at first base. I am a fan of Mike Ford, but to suggest that he is capable of taking the reigns full time, would be a big downgrade from Voit. Here is a comparison of Ford and Voit’s 2020 seasons: (info via Fangraphs)

Not that there should’ve been any debate before, but to me, Ford is a bench power bat if I’ve ever seen one. Luke Voit, on the other hand, is a franchise first baseman. Sure, Ford had a much smaller sample size, but Voit nearly doubled his OPS, and across a full season, could’ve posted 5.0+ fWAR. There should be more people putting respect on Voit’s name, and I feel it’s past time to give him recognition as one of the best at his position in baseball. If he is to be traded, the only thing I would feel comfortable receiving back is an elite pitcher or a top 10 prospect. Add to that, Voit is entering the supposed prime of his career and could well be on his way to a 40 HR season in 2021.

Why Voit has been tossed into various trade discussions is beyond me, but if there were to be an offer for someone like Noah Syndergaard, I’d be a bit intrigued. However, at this point in their careers, I’d say Voit holds more value than Thor. To shop someone is one thing, but to truthfully believe Voit should be dealt is “Bad GMing 101”. The MLB top 5 1B in 2019 — full 162 game season for reference purposes — by WRC+ and OPS, goes to show that the depth at first base isn’t as deep as one would think:

For reference, Voit’s OPS of .842 landed him 11th in the majors that season.

Voit’s 2020 WRC+ and OPS totals (152 & .948) would find himself in first on both sides of this list, but of course, it was across a much smaller sample size. Voit’s sample with NYY should be well clear of “I need to see more” and into the “I can’t wait to see what more he can bring.” The only potential saving grace in dealing Voit, aside from whomever we get back, is that DJ LeMahieu could potentially slide over to first base. However, using DJ at first is using him at his worst defensive position. In my previous article, I mentioned how DJ and Gleyber Torres form a great middle infield duo, one in which is, in my opinion, T5 in baseball. If DJ is to be resigned and hypothetically moved to first full-time, then now the Yankees are at a massive loss offensively. That means the immediate replacement within the club at 2B would be Estrada or Wade unless they swap with Gleyber at SS. Either way, the offense will be taking a huge hit having Estrada or T-Dizzle batting far more along with Mike Ford, instead of Luke Voit. Losing Voit in any sort of trade, unless an immediate first base replacement is signed or brought in, would make this team worse.

Since arriving in 2018, there have been many people who still believe that Luke Voit is a flash in the pan. Those people say that there’s no way he can sustain this type of play or that Voit’s 2020 season will be long forgotten when ’21 is a big step backward. However, looking at Voit’s career trajectory and his performances with NYY, there’s no substance to that argument. Voit has played in 213 games for the Yankees, smashing 57 HR with 31 2B, holding an OPS of .915, and accumulating roughly 4.5 fWAR.

There’s no true telling just how good Luke Voit can be over the next few years. If this last season was any sign of things to come, then Luke could legitimately be the best offensive first basemen in baseball going forward. Dan Szymborski dropped his 2021 Yankees ZiPS projections this last week, on the ever so eerie Friday the 13th. However, there wasn’t anything spooky about Voit’s projections:

While I would go as far as to say that those projections are on the lower side of what Voit can do, a .885 OPS projection would establish him in the Top 10% of players. I expect to see Voit’s AB’s exceed 500 this upcoming year, assuming there are no health issues. Voit’s foot should be well healed by Spring, and that leads me to believe the best is yet to come. Assuming Voit’s injury lingered around as long as it did, one could say Voit played with an injured foot from end of August/early September onward. His September & postseason numbers clearly indicate he was playing in pain, but that didn’t stop him from contributing and being one of the main reasons the team finished the regular season strong. Still posting a solid OPS of .832, to go with a 123 WRC+ and 9 HR over the remaining 27 games, there was simply no quit in him. For that reason, there’s a great chance the ZiPS projections are underselling him. If Voit is to be fully healthy and swinging the bat as consistently as he’s been doing in Pinstripes, then a 40+ HR season with an OPS upward of .950 is in the cards.

His tenacity and passion are unmatched, and to say Voit wants to get the best out of himself and the team is an understatement. He’s never satisfied with his own performances, and much like Judge, he cares far more about the team’s results than any individual accolade. Luke has done more than enough to earn his place in this team for years to come, and almost as importantly, he has done more than enough to earn every Yankees fans’ respect and support. To suggest that because his value is at the highest, it’s been, the team should trade him is complete lunacy.

Why trade the diamond in the rough?

The MLB first base position is very top-heavy right now. You have the obvious, long-time great guys like Freddie Freeman — who just won his first MVP award, Paul Goldschmidt, Carlos Santana, and Anthony Rizzo. Then there’s the crop that Voit falls into, where it’s the new wave of talented first basemen. Max Muncy, Luke Voit, Matt Olson, Pete Alonso, and I’d say, Jose AbreuÂ are all along the same lines of talent and abilities. Yes, Jose just won an MVP award, but he won it based solely on the fact he had the most RBI’s, so that doesn’t cut it for me. With that, the outlier would be Olson simply because his defensive value is much greater than the others. These last three or so seasons have allowed a new wave of players to come in and throw their hat into the ring of baseball’s best. Seeing Voit’s rise has been one of my favorite things as a Yankees fan, especially after the carousel of pain revolving around the Greg Bird experiment.

To trade away someone who is truly only getting his career started, and has already shown the massive potential there, could be a grave mistake. For the Yankees to have made one of the best moves in acquiring Luke Voit back in 2018, to just flip Voit now that he’s at his peak value, wouldn’t make sense. It seems as if the first base position is finally solidified going forward, for the first time since Teixeira. While Gallegos has turned into a fine back-end bullpen arm, there is no way to suggest that he has been anywhere near as impactful as Voit for STL. Cashman and co did a fantastic job finding and bringing Voit to NYY, and now that he’s seemingly filled the shoes that have been empty for so long, it’s time to sit back and watch him work. It’s a privilege to watch this beautiful game, and to be able to watch guys prove themselves and establish themselves in this league makes it all the more incredible. With so much turnaround, so much competition, and so little room for error, to see Voit along with countless others make the leap, is simply awesome.