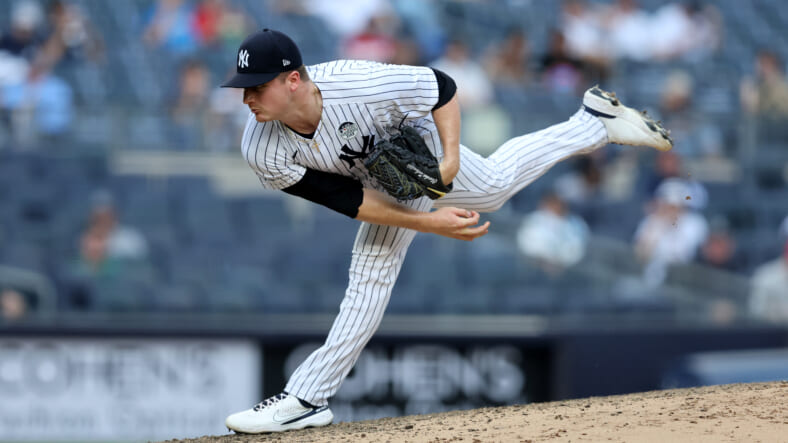 At the trade deadline, the Yankees traded away Jordan Montgomery who had been one of their most consistent starters throughout the season. Montgomery had been a fixture of the rotation for the Yanks for the past few seasons and overall he was solid this year.

With Montgomery out, there were a lot of questions surrounding the Yankees rotation. For now, Domingo German has taken over Montgomery’s spot in the rotation. However, this is not something that the majority of fans love.

Many Yankees fans wanted to see former first-round pick Clarke Schmidt get his shot in the rotation. However, Schmidt had been pitching out of the bullpen throughout the 2022 season and as a result, he really hadn’t been stretched out.

Because of this, the Yankees sent him back down to start stretching his arm out. Last night, Schmidt made a start for the Railriders and he didn’t disappoint. In fact, he sent a message that was loud and clear to the Yankees front office and the fan base.

Schmidt getting ready for Yankees rotation

I don’t care what the current message from the front office and Aaron Boone is, Domingo German is not the right guy for the last spot in the rotation. Is he fine and serviceable? I suppose, but he’s not who the Yankees are envisioning in that spot whether they state it publicly or not.

The Yankees are a team that is always thinking about what’s next in addition to this year. Right now, there are no open spots in the rotation, but that might not matter to Clarke Schmidt. The way he’s looking right now, someone is getting the bump and that’s likely going to be German.

Schmidt was able to throw 78 pitches last night. I think that the Yankees will likely give him one more start in Triple-A, but after that, I think German gets the boot so Schmidt can take over. Schmidt is a guy they believe can take a permanent rotation spot starting next season.

Right now, the Yankees only have three set spots in the rotation for next season. Gerrit Cole, Frankie Montas, and Nestor Cortes are the only guys who look to be firmly in the rotation with two spots that are wide open at the moment.

Luis Severino and Jameson Taillon are both set to be free agents after the season. Instead of looking to fill two rotation spots, I think the Yankees are wanting Schmidt to take over one of those spots. The last spot of the rotation would be filled by someone on the market.

Whether that be a trade for someone like Pablo Lopez or perhaps a free agent signing. Had it not been for a UCL tear, Clarke Schmidt likely would have been a top ten pick in the MLB draft. However, he fell to the Yankees due to his injury.

There has been a lot of hype around him for some time, but he’s never really shown his true potential as a starter. Perhaps we are getting closer to seeing that. Before the season is over, Schmidt will be a starter in the Yankees rotation and I think he’ll get that spot for good starting next season.