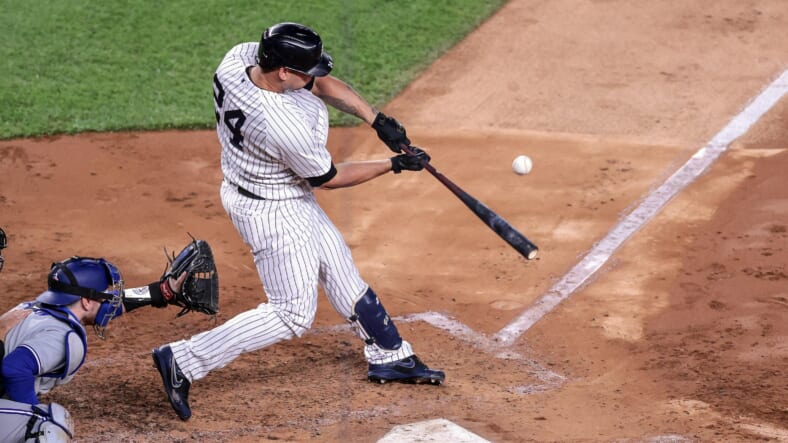 The New York Yankees found themselves down 3-0 in last nightâ€™s finale against the Texas Rangers in the fifth inning. It was a must-win game for the Bombers, as the Boston Red Sox annihilated the New York Mets and the Toronto Blue Jays lost to the Tampa Bay Rays.

A Yankeesâ€™ loss yesterday would have meant that the Blue Jays kept their second Wild Card spot, but the Bombers won, and surpassed them in the standings.

With crucial contributions from Gleyber Torres, Gary Sanchez, and a wonderful performance by the bullpen, the Yankees turned things around and ended up prevailing 7-3 in the Bronx.

With the game knotted at three in the eight, Torres put the Yankees ahead with an RBI double. New York would score four runs on that frame, and Sanchez would break the game open with a long home run to dead center.

Sanchez also threw out a would-be basestealer late in the game, impacting the game as a replacement.

â€œWhen you have an opportunity to impact the game on both sides of the ball and help your team get a victory, it means a lot,â€ SÃ¡nchez said through an interpreter, to MLB.com. â€œYouâ€™re going to feel really good about that.â€

The Yankees control their own destiny

Now, the Yankees (86-67), winners of three straight games, moved a half-game ahead of the Blue Jays (85-67) for the second American League Wild Card spot. New York is two games behind the Red Sox (88-65) for the top position.

â€œWeâ€™re in control of things. Thereâ€™s some comfort in that,â€ manager Aaron Boone said. â€œItâ€™s on us. Itâ€™s right in front of us.â€

The Yankees have nine games remaining: three in Boston, three in Toronto, and three in New York hosting the Rays. Itâ€™s a brutal final stretch, but they control their destiny.

â€œItâ€™s always a challenge when you play three really good teams in Toronto, Boston and Tampa,â€ Kyle Higashioka said. â€œWeâ€™re up for it. If weâ€™re not up for it, weâ€™re going to be heading home, so we know whatâ€™s at stake.â€