The New York Yankees “Golden Boy” Dr. Bobby Brown has passed away at 96 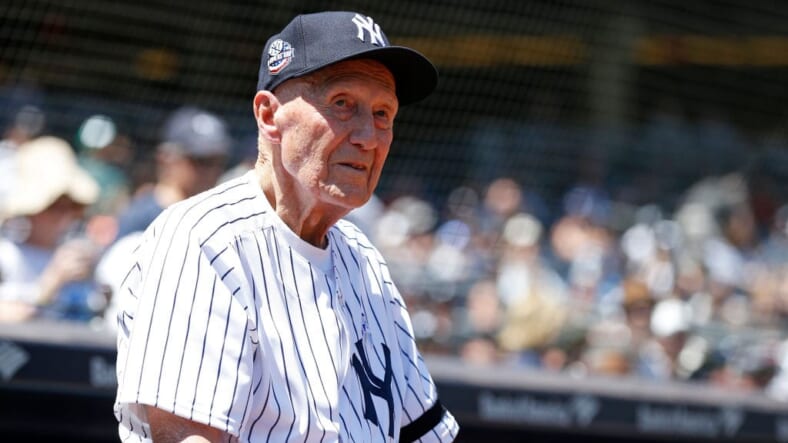 The New York Yankees have lost another great. This morning Dr. Bobby Brown the Yankees “Golden Boy’ passed away at the age of 96. Up until the coronavirus, Bobby Brown was a fixture at every Old Timer’s Day celebration. He won four championships with a batting average of .439 across 17 World Series games in his time with the Yankees. Yankee owner and general partner Hal Steinbrenner had the to say upon learning of his passing:

â€œFew people who have worn the pinstripes have lived such an accomplished, fulfilled, and wide-ranging life as Dr. Brown, who was beloved by our organization for his warmth, kindness and character, He represented the pinstripes with elegance throughout his playing career and in subsequent decades as a frequent, welcome guest at Old Timersâ€™ Day. We also hold the utmost respect for the myriad of other accomplishments in his life â€” from service to our country, his stewardship of the American League and his longtime career as a cardiologist. The Yankees extend their deepest condolences to his family, friends and loved ones as we reflect on his incredible life.â€

Few living New York Yankee fans know much about Bobby Brown, but you should. He was quite a guy, to put it mildly. He only played eight years for the Yankees and wasnâ€™t their top player due to the megastars he played with, so he tends to get overlooked. Many of us see him as that old man at the Old Timers Day Game each year but know little about him.

Robert William Brown was born in 1924 in Seattle, Washington. There are few parallels in baseball that equal Bobby Brown. For the Yankees, he held down the hot corner for eight years. When you play for the Yankees, you donâ€™t have a lot of free time, but Bobby, during his time with the Yankees, also studied to become a successful Cardiologist. He was an intelligent guy and knew he needed a job to fall back upon when his baseball days were over. Back then, players werenâ€™t set up for life, with the big contracts given today. Bobby served in the military in 1953 in the Korean War before returning to the Yankees.

The â€œGolden boyâ€ of the Yankees was an excellent defender at third base. Many that recall his play say he was as good as Graig Nettles. He wasnâ€™t a home run hitter, but he was a lifetime .279 hitter with 22 home runs in his career. He would have had better stats, but he only played in half of the games, as he shared the third base with Billy Johnson. It was common during the period for managers to platoon players. He played with the likes of Billy Martin, Yogi Berra, Whitey Ford, and Joe DiMaggio. Bobby and DiMaggio went to the same high school together.

Brown had a bases-loaded triple in Game 4 and a two-run triple in the championship-clinching Game 5 of the 1949 World Series. He tripled again in the final game of the 1950 World Series. All and all, he was a champion in four World Series while batting .439 in seventeen games.Â  In three of his eight Yankee years, he had a batting average of over .300. I can think of many present-day Yankees that would love to have that batting average.Â  At third base, he had a .948 fielding percentage and in the outfield a 1.000 fielding percentage.

A famous apocryphal story that has made the rounds for years in baseball circles concerns the time when Brownâ€™s road roommate was star New York Yankee catcher Yogi Berra, who had little formal education. The two were reading in their hotel room one night, Berra, a comic book, and Brown, his copy of Boydâ€™s Pathology. Berra came to the end of his comic, tossed it aside, and asked Brown, â€œSo, how is yours turning out?â€ Brown was a brilliant guy, having attended Stanford, UCLA, and Tulane, where he received his medical degree.

After Bobby Brown left baseball, he opened his Cardiology practice in Forth Worth, Texas. He took a leave from heart surgery in 1974 to become President of the Texas Rangers for a year before returning to his practice. At the age of 60, he retired from medicine and became President of the American League, a position he held until he was 70. Since then, he has been a regular at Yankee Old Timerâ€™s Day celebrations. This amazing Yankee will be 96 this year. He is the last New York Yankee survivor of the 1947 and 1949 World Champion Series.

Now you know a bit more about Dr. Bobby Brown. We have lost so many of the Yankee greats in recent years, like Yogi Berra, Phil Rizzuto, Mel Stottlemyre, Don Larsen, Oscar Gamble, Bob Turley, and now we have lost Dr. Bobby Brown, the Yankees “Golden Boy.” For this sportswriter, it is a sad day as another childhood hero has passed.