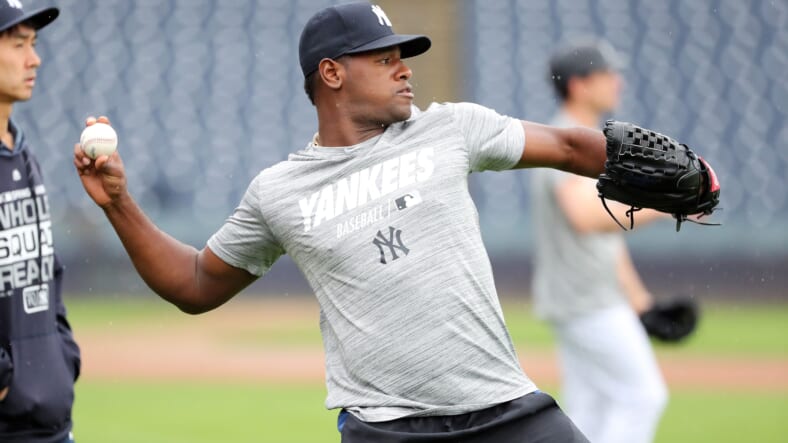 Luis Severino, a starting pitcher for the New York Yankees, shows his ace-like stuff in a win against the Los Angeles Angels, on Tuesday night.

Severino was activated off of the 60-day IL last weekend, after being sidelined with right rotator cuff and right lat injuries. He has not appeared in a game in 344 days, his last appearance came in Game 3 of the ALDS last year against the Red Sox (MLB.com).

His outing consisted of 4 innings of two-hit ball, on 67 pitches, and nine swings and misses. His repertoire consisted of 96.6 average MPH on 37 fastballs, 19 sliders, and 11 changeups (MLB.com). Severino, Loaisiga (winning pitcher), Gearrin, and Adams combined for a six-hit shutout. This gives the Yankees their 99th win of the season. Aaron Boone and the Yankees front office are making a smart move in easing Severino back into the rotation.

How Effective can Severino be in the Playoffs?

With 10 games left, Severino should be expected to make two more starts. Increasing his pitch count in each outing, he will ultimately be prepared for the postseason. He will be a big boost for a slowly improving rotation.

The ideal spot in the playoff rotation for Severino would most likely be to start game two. Paxton has been one of the best pitchers in the league for the past two months and should be rewarded with being on the bump in game 1 of the 2019 American League Divisional Series. Tanaka, with his experience and track record in the playoffs, should get the nod in game 3 on the road.

The Yankees look to achieve 100 wins on the year and clinch the division by the end of the series, with the magic number at just two. A World Series win would make a great headline, with all the injuries this team has endured. The baseball world is seeing similar signs of Yankees’ past World Series runs, like the ones in ’98 and ’09. Fans can only wait and see what this team brings to the table in the postseason.