New York Yankees Recap: Montgomery and the Yankees win a big one from the Rays 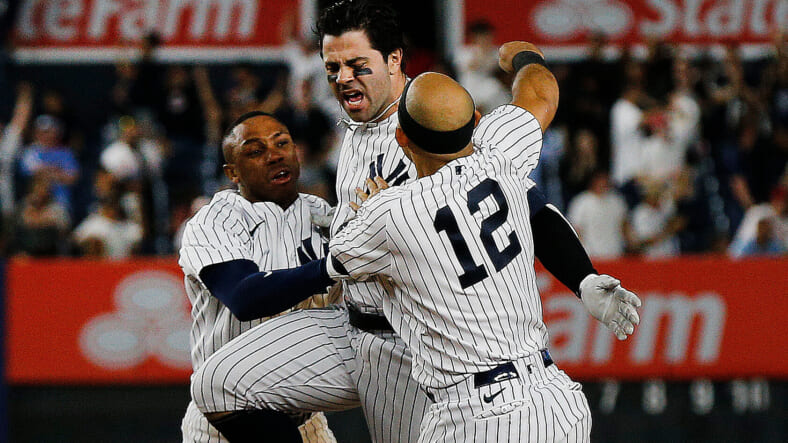 The New York Yankees entered the three-game series with the Tampa Bay Rays at Tropicana Field after a heartbreaking loss against the Boston Red Sox. After a day off, the Yankees are hoping to at least take this series. They are 9.5 games behind the East-leading Boston club. The Yankees previous to tonight were 5-8 against the Rays this season. The pitchers for the game were Jordan Montgomery for the Yankees and Shane McClanahan for the Rays.

The first inning had DJ Lemahieu double in his first at-bat. The Yankees loaded the bases, but like so many times this season, the Yankees (Torres) hit into a double play to end the inning. The Rays did not score with Jordan Montgomery on the mound.

The second inn was led off by Rougie Odor, who ground out. Gio Urshela doubled easily. McClanahan had a wild pitch, and Urshela made it to third. Ryan LaMarre went down on strikes. Greg Allen struck out, leaving the fourth Yankee on base with nothing to show for it. At the bottom, Ji-Man Choi struck out. Randy Arozarena singled to left. Brandon Lowe at the plate a balk was called on Montgomery. Lowe popped out to LeMahieu. Mike Zunino ground out to third to end the scoreless inning. LeMahieu threw 51 pitches through two innings. No score.

The third inning was led off by LeMahieu, who flew out. Aaron Judge ground out to third. Gary Sanchez flew out to the warning track in right. At the bottom, Kevin Kiermaier ground out to third. Manuel Margot beat out a rolling ground ball. Franco singled to left with Margot moving to second. Nelson Cruz hit into a double play to end another scoreless inning.

Giancarlo Stanton led off the fourth by striking out for the second time in the game. Torres singled to center. Odor worked a walk for two on and one out, with Urshela coming to the plate; he singled with Torres being called out at third. LaMarre ground out with the Yankees standing another two players. Diaz led off the bottom of the fourth lined out to center field. Choi singled to center. Arozarena ground out with Choi checking in in scoring position. Lowe, with two outs, singled to short, holding Choi at third base. Zunino went down looking as both teams couldn’t get runners across home plate. No score.

The fifth inning was led off by Greg Allen, who doubled down the left-field line. LeMahieu singled, and the Yankees finally got on the board. Judge hit into a 6-4-3 double play. Sanchez walked. Stanton struck out, but the Yankees picked up a run. At the bottom Kiermaier sharply right to LeMahieu. Margot struck out, followed by a Nelson Cruz gound out. New York Yankee 1 Rays 0.

Gleyber Torres led off the sixth by singling with a line drive to left. Odor singled to right, moving Torres to third. Then, Urshela got a two-run double to left-center that split the outfielders allowing two runs to score. Interestingly Phil Nevers, the third base coach, had the red light for Odor, but he ran through it and scored. Allen struck out. LeMahieu flew out to right, but the Yankees tacked on two more runs.

At the bottom of the sixth, with new pitcher Chad Green on the mound, Diaz struck out swinging. Choi walked. Arozarena went down on strikes. Lowe hit a homer to left, driving in two runs.Â  Zunino walked, but Arozarena gound out, getting Green out of further trouble. New York Yankees 3 Tampa Bay Rays 2.

Judge against Kittredge led off the seventh inning; he went down on strikes.Â  Sanchez also went down on strikes. Stanton walked for the second time in the game. Torres ground out to third. Margot led off the bottom of the inning with Jonathan Loaisiga on the mound by striking out. Franco ground out to third. Cruz, who was 0-2 with a walk, struck out swinging. Yankees 3 Rays 2.

The eighth inning saw Odor against new Ray’s pitcher Jeff Springs; he walked. Urshela hit into another Yankees double play. LaMarre hit a homer to right-center to give the Yankees a two-run lead. Allen walked, bringing in new pitcher Luis Head to face LeMahieu. Allen stole second. LeMahieu ground out to right, but the Yankees tacked on another run. At the bottom, with Zack Britton on the mound, Diaz walked on five pitches. A wild pitch allowed Diaz to got to second. Choi struck out on a 10 pitch battle. Arozarena got a ground-rule double scoring Diaz. Lowe singled, and Arozarena when to third. Zunino hit into a double play to keep the Yankees ahead by one run.

The ninth inning was led off by Judge, who was hit by a pitch and took first. Sanchez walked. Stanton, with two on and no outs, struck out. Torres struck out. Odor then, with two outs, flew out to stand two. At the bottom, with last licks on the line for the Rays and Aroldis Chapman on the mound, Kiermaier struck out. Margot flew out to a diving Greg Allen. Franco walked. Phillips pinch ran. Nelson Cruz struck out for the Yankees win.

The winning pitcher was Jordan Montgomery, and the loser was Shane McClanahan, and Aroldis Chapman got his 19th save.