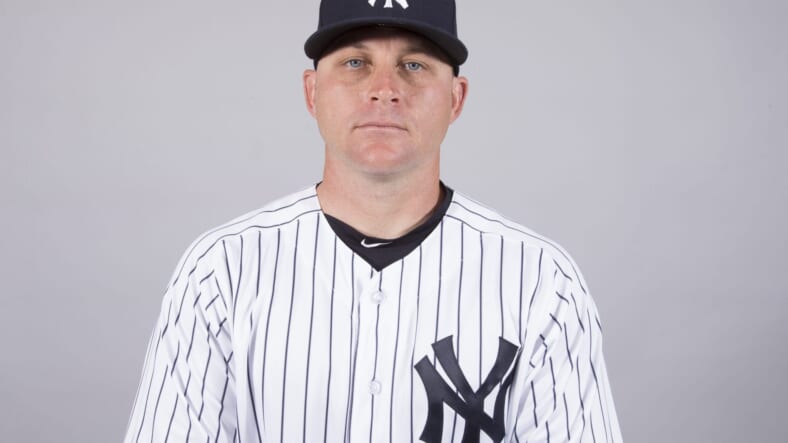 The New York Yankees announced today that they are losing first base coach Reggie Willits whose contract is up in December. According to Lindsey Adler, Willits is leaving the organization to be a volunteer assistant coach at the University of Oklahoma. Willits spent his entire playing career in the outfield with the Los Angeles Angels.

The New York Yankees hired Willits in 2015 to be their outfield and baserunning coordinator. He was promoted to first base coach for the 2018 season, where he has served for the last four years. It is a bit surprising that he is leaving for a non-paying job as he is only 40 years old. However, he is returning home to Oklahoma, where he met his wife Amber in the sixth grade. They both attended the University of Oklahoma, where they were married. They have three children and live at the Double 7 Ranch. With Willits departure, he adds his name to three other coaches that will not be returning for the 2022 season.

Even before the end of the World Series, the New York Yankees have already made some significant changes to the staff. Hitting coach Marcus Thames will not be returning in 2022. Also, highly thought off third base coach Phil Nevin will also not have his contract renewed after a terrible mistake ushering Aaron Judge home and being called out by at least twelve feet. ESPN has also reported that Assistant Hitting Coach P. J. Pilittere’s contract will not have his contract renewed either.

It’s no secret that the Yankees had a darn awful hitting season going long stretches not hitting, and it appears that the Yankees hitting coaches are paying the price. During the offseason, the Yankee organization will have to develop a brand new hitting department that hopefully can correct that deficiency. With the departure of Willits, they will also be looking for a new first and third base coach. Stay tuned to EmpireSportsMedia.com for all the offseason Yankee activity as they look to put together another championship team.