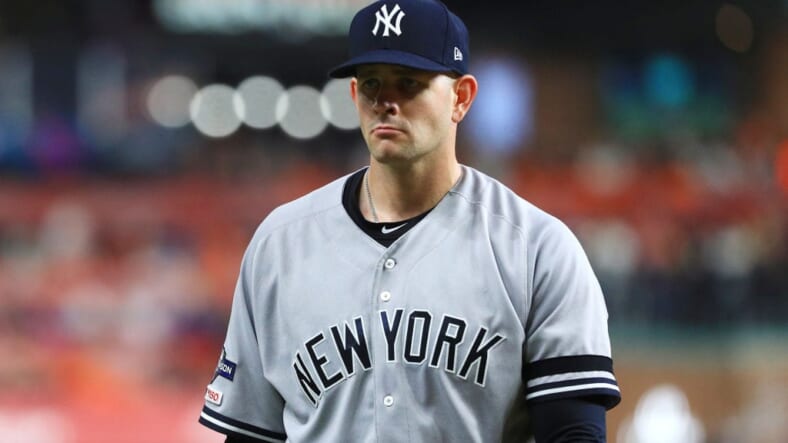 HOUSTON, TEXAS – OCTOBER 13: James Paxton #65 of the New York Yankees walks to the dugout after pitching during the first inning against the Houston Astros in game two of the American League Championship Series at Minute Maid Park on October 13, 2019 in Houston, Texas. (Photo by Mike Ehrmann/Getty Images)

The New York Yankees when and if the baseball season starts will welcome a new James Paxton.Â  During the off-season on February 5 Paxton had â€œmicroscopic lumbar discectomy with the removal of a peridiscal cyst. The surgery was performed by Dr. Andrew Dossett in Dallas, Texas.â€ according to the Yankee front office.Â  The surgery was to keep Paxton two to four months off the pitching mound and missing much of the first half of the season.Â  With the season shortened by the coronavirus and with Paxton’s swift recovery, it now appears he will miss no time at all.

James Paxton of the Yankee injuries has benefited most from the season delay.Â  Gary Sanchez has recovered from a sore back, and Giancarlo Stanton is totally recovered from a grade one calf strain.Â  Still Yankee slugger Aaron Judge is still recovering from a fractured rib and will not be ready for the season start, with no known rehab timing.Â  Big blows to the season are the absence of co-ace Luis Severino, who will miss the entire season due to Tommy John surgery and the loss of Domingo German, last season’s best pitcher due to his 60-day suspension that must be served when the season finally starts.Â  That 60 day period will encompass most of the 80-85 game season.

Without Severino or German and even with the acquisition of Gerrit Cole, the New York Yankees will more than ever have to depend on lefty Paxton being the pitcher he was during the second half of the last season when the Yankees won all eleven of his starts.Â  For the season he went 15-6. with an ERA of 3.82. Paxton, while rehabbing, has been working on his fastball to create more spin.Â  When asked about what he is trying to achieve Paxton had this to say:

â€œWell, for me, what I found was how I hold the ball, how I hold my fastball, Iâ€™m trying to hold it a little bit differently with less contact on my thumb because I guess thatâ€™s supposed to kind of like put some drag on the ball,â€™â€™ Paxton said. â€œSo, I have been trying not to touch my thumb as much to the ball. And Iâ€™ve been noticing some more spin and back spin when I throw the ball.â€

Paxton’s spin rate on his four-seam fastball is about 2.263, whereas Gerrit Cole’s is over 2.530.Â  More spin rate means more whiffs (strikeouts). Even though Paxton had an excellent second half last season, Cole (20-5) is a far more consistent over a greater period than Paxton (Paxton lost all six of his July starts). Paxton, who now says that he has completely recovered from this back surgery, has said he feels great and is ready to start the season.Â  He reported that he also has a new warmup routine to make sure his back is loose.

When the New York Yankee further talked about his Wisconsin analytically inspired grip he had this to say:

â€œYeah, it was a little bit weird. Iâ€™ve heard guys say that when you tuck your thumb underneath the fastball, thatâ€™s when you get the most spin, but I just have no feel for where the ballâ€™s going when itâ€™s there,â€™â€™ Paxton, 31, said. â€œSo I still kind of have that guiding thing with my thumb, but because I still have my thumb on the ball I have that pad of my thumb off of the ball, so I still experience some increase in spin, which has been fun to see.â€ He added ” If the season was ready to start tomorrow, or spring training would be ready to start tomorrow, Iâ€™d be ready to be just like one of the other guys and do all the regular stuff.â€

EmpireSportsMedia.com’s William Parlee is a member of the Society for American Baseball Research. Follow me on Twitter @Parleewilliam