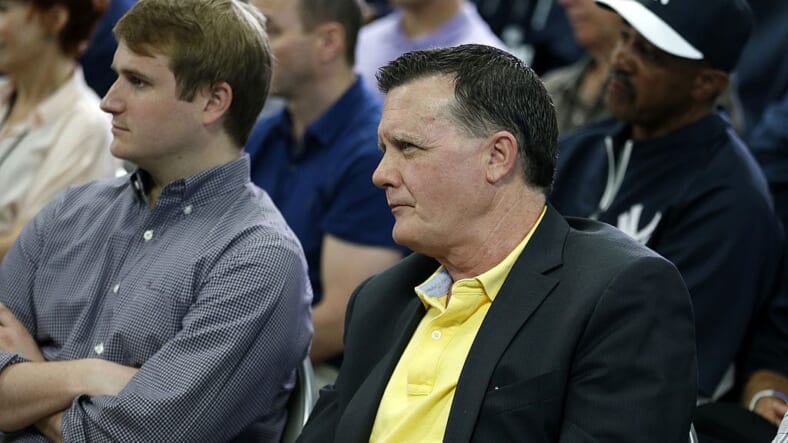 Yesterday marked the sad passing of New York Yankees General Partner and Co-Chairperson Henry G. “Hank” Steinbrenner.Â  The elder son of George M. Steinbrenner was an amazing man who loved life and was deeply involved in the Yankees, charities, horses, and many other business endeavors.Â  In recent years he has maintained his office at the Yankees training complex in Tampa, Florida.Â  He was more involved in the Yankees than many fans realized.Â  He oversaw all baseball operations with his brother Hal but was directly involved in player negotiations, long-term player recruitment goals, and overall club strategy.

As Hank’s father George began to loosen his grip on the team as he aged and became ill, for a few years before the 2009 World Championship, Hank began to take a larger roll in the Yankees.Â  Hank was very different than his brother Hal.Â  Hank was cut from a similar cloth as his father; you knew what Hank thought and often publically.Â  Unlike the reserved Hal, Hank was colorful, often saying provocative things that would reach the tabloids, reminiscent of the “boss”.Â  He was warm, engaging, and genuine, but also direct.

He once said of Alex Rodriguez in 2007 when he was about to opt-out of his contract.Â  “Does he want to go into the Hall of Fame as a Yankee or a Toledo Mud Hen?” He also once said, “if there’s a Red Sox Nation, there is a Yankee Universe.” With present managing partner Hal Steinbrenner you will never hear that type of candor.Â  For whatever reason, over the next few years, it became apparent that brother Hal would be the one that would lead the New York Yankees into the future.

Hank was deeply involved in charitable organizations from Tampa to the Bronx.Â  Childrenâ€™s charities in New York and Tampa Bay, including The Joshua House, St. Josephâ€™s Childrenâ€™s Hospital, Gigiâ€™s Playhouse Tampa, The Childrenâ€™s Dream Fund, and the New York Yankees charitable foundations to name just a few.Â  He was also on the Board of the YES Network and the Gold Shield Foundation.

It is unknown what Hal died from, but the family said it was a long-standing illness.Â  Hank was known to be a heavy smoker for most of his life. One thing that is sure, the piano and guitar playing, rock music-loving, horseracing enthusiast Hank that never lost his love of the Yankees will be severely missed his siblings Hal, Jennifer, and Jessica.Â  Hank leaves his four children and one grandchild.

The New York Yankees and all of MLB will take part in a national study headed by Stanford University, USC, and the Sports Medicine Research and Testing Laboratory.Â  The study will help researchers trying to gain a better sense of how widespread the coronavirus is throughout the country. A rapid antibody test will be administered using kits that draw blood from a finger and provide results within a matter of minutes. The tests will determine if participants have contracted the coronavirus even if they were asymptomatic.

The study will involve the New York Yankees, Mets and 25 other baseball teams from around the country. It will test about ten thousand baseball personnel from players, the front office, and stadium workers.Â  This will be the first study of it’s kind.Â  Although it will not have anything to do with when the baseball season starts, it will a greater understanding of the disease.

Yankee odds in a Grapefruit League

Anyone that follows my writings, knows that I am not in favor of this approach to getting a baseball season started.Â  But many are looking at what effect the realignment would have on the New York Yankees.Â  Fangraphs has looked at the plan and said it would be advantageous for the Yankees and would nearly assure them a place in the postseason.Â  They project an 89.2% chance of a Yankee postseason.

Under the plan, if implemented, the Yankees would not face traditional rivals, Boston Red Sox and the Tampa Bay Rays, but would face much weaker teams, including the Blue Jays, Detroit Tigers, Pittsburgh Pirates, and the Philadelphia Phillies. Joe Girardi’s Phillies would be the toughest competition for the Yankees.

The Fangraphs result showed the Yankees leading the entire Grapefruit League (15 teams) with a 69-43 record, with the Astros (66-46), Rays (64-48) and Twins (63-49) behind them. The Yankees’ overall playoff probability was a whopping 89.2 percent, even with seven of last year’s 10 playoff teams playing in the league.