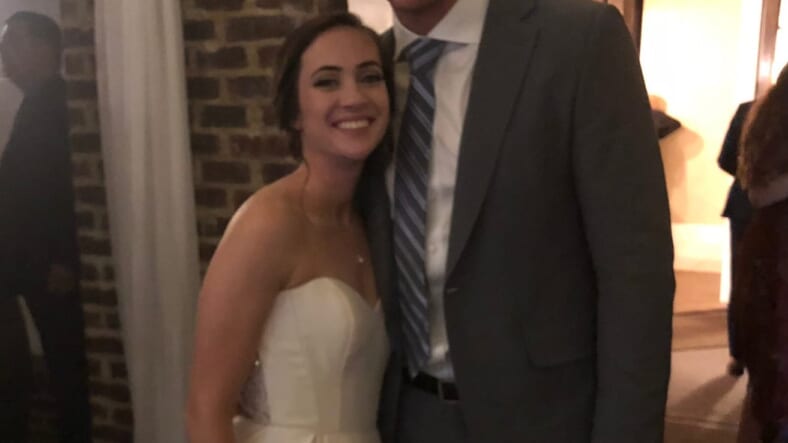 New York Yankees star player Aaron Judgeâ€™s girlfriend Samantha Bracksieck was busted on â€œextreme DUI.”Â  According to Arizona court records, she was stopped around 11:50 p.m. on Feb. 25 in Scottsdale after cops allegedly caught her driving a white 2017 Honda HR-V without the headlights on while going up to 10 miles above the speed limit.

When Scottdale ( just outside Pheonix) police stopped her questioning her about her headlights, she said that she didn’t realize that they were not on.Â  Police could smell a strong liquor smell coming for her car and from her breath as she spoke.Â  She was tested and found to have an alcohol level of between 1.5 and 1.9, resulting in the charge of extreme DUI.Â  The allowable alcohol level in Arizona is .08.

Arizona is a no-tolerance state for driving under the influence or DUI, meaning that you can be arrested with a blood-alcohol content of less than the legal limit of .08%.Â  When she was questioned, she could not name the cross streets where her apartment is located even though she had lived in the neighborhood for ten months. She was arrested on driving under the influence, speeding an unsafe lane change.

Sh e was held for a couple of hours before being released from the Scottsdale police department.Â  In court, she pleaded innocent, and the case is ongoing according to records.Â  The New York Post called, and neither her or her attorney returned calls.

With the MLB owners including the New York Yankees are requesting a revenue-sharing clause in the plan to start baseball, the Players Union has said that it is a non-starter.Â  According to Ken Rosenthal, the negotiations are at a stalemate.Â  Right now, the sides are apparently not talking.

MLB Network insider Jon Heyman said that no formal financial plan had been given to the Players Union. Still, the union has indicated that the idea of revenue-sharing is a precedent they don’t want to set as they see it as a salary cap. Something that the union is adamantly against.Â  He also stated:

MLB in recent talks gave the union 2 options: 1) negotiate a new financial arrangement (sonething other than prorated pay for players playing games with no fans in attendance) or 2) wait until the Coronavirus yo clear to the point where fans can attend games.

Both MLB and the New York Yankees hope some type of deal can be reached by the end of the week.Â  They and all the owners realize that the clock is ticking, and they need to start baseball soon to have any type of legitimate season.

The go-ahead could signal a start for Yankee and Mets baseball this season.

â€œBut why wait until you can fill a stadium before you start to bring the team back? And if you can televise it in the meantime, great,â€ he said.

He also stated that he had been watching old games on TV, but would instead be watching new games played in his state.Â  Cuomo, who is not a particular New York Yankee baseball fan, did say he would like to see the Buffalo Bills football team play.Â  As far as Yankee Stadium is concerned, Mayor Bill de Blasio may have something to say about the opening as only three of the seven criteria needed to begin a phased reopening have been met in the city that includes the Bronx where Yankee Stadium is located.