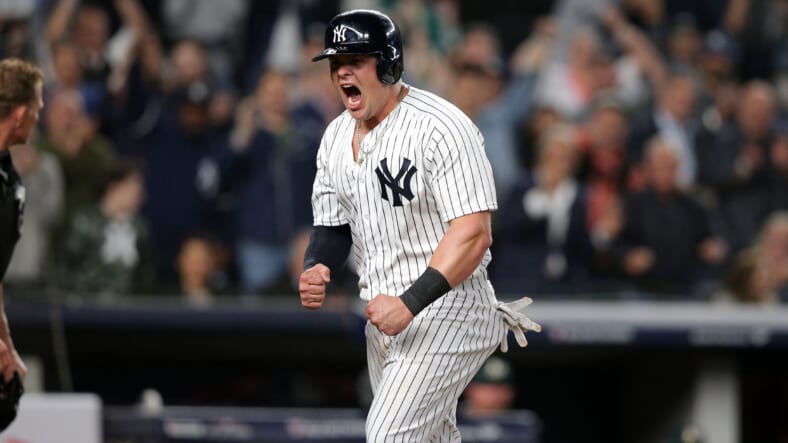 The New York Yankees turned in an explosive performance against the Toronto Blue Jays on Tuesday night, winning by a score of 20-6. In what seemed to be a football game, the Yankees tallied 16 hits, 20 runs, and walked seven times in their impressive win. This marked six consecutive games in the win column, which is a major change from a five-game losing streak earlier last week.

While starter Deivi Garcia had his ups and downs throughout the contest, the run support was impeccable, giving him another victory. He is now 2-1 on the season with a 3.28 ERA.

The good news, the New York Yankees are back on track and heading toward a playoff berth. Their offense was unstoppable on Tuesday night, with Luke Voit recording five RBIs and two home runs. Even struggling catcher Gary Sanchez got in on the action, launching a three-run blast and recording four RBIs. In addition, DJ LeMahieu had four hits over six at-bats and also had five RBIs. This was just an offensive masterpiece across the board, and the Yankees will hopefully carry this over into their second game of the series in the Bronx.

It is crazy to think that the Yankees only recorded five runs in the final two games against the Baltimore Orioles over the weekend. They quadrupled that collective number in one game, showing off their potential. In addition, their starting pitching has remained strong since embarking on their current winning streak. GarcÃ­a lasted 7.0 innings, allowing three earned runs and striking out six batters.

There was not a single lick of bad news from Tuesday evenings match up, as the negative stuff came prior to the start of the game. Manager Aaron Boone informed the media that Gleyber Torres re-injured his quad and has been resting for the past few days.

It is a good sign that he hasnâ€™t been placed on the injured list, as he would likely have played tonight if it was a postseason match up. Giving him the extra time to heal while the Yankees pummeled the Blue Jays is exactly what they should be doing. Resting up and ensuring theyâ€˜re 100% healthy for the postseason is a necessity at this point.