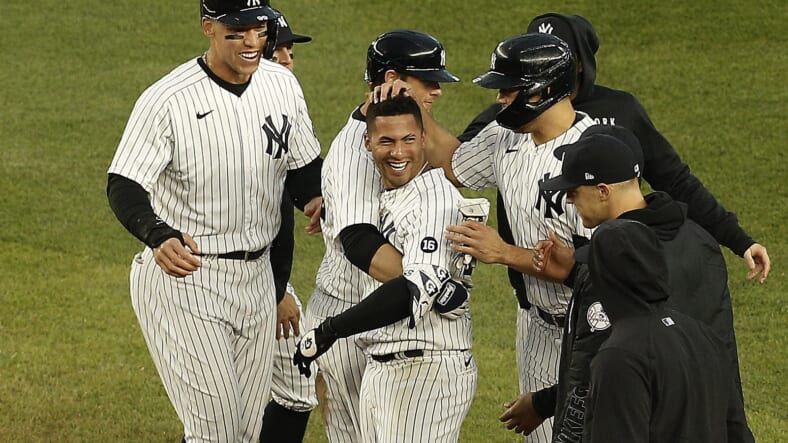 A little more than a month into the 2021 season, the New York Yankees have yet to completely fire on all cylinders. Although the Yankees have won seven of their last nine games, the team average is still less than stellar at .222 with a .701 OPS. However, the Yankees finally have some true momentum going after back-to-back walk-off victories against the Washington Nationals to conclude the longest homestand of the season.

This series victory over the Nationals was by no means the prettiest, but it got the job done. After an abomination of a game on Friday, the Yankees were able to grind out two tough victories over the weekend, including a victory over Max Scherzer on Saturday. Gleyber Torres once again lived up to his clutch gene, knocking in the tying run in the ninth inning and then winning the game in the 11th inning with singles both times. Corey Kluber pitched another beauty, going 5.2 innings and allowing two runs against the lethal Washington offense.

On Sunday, Domingo German pitched a gem for the Yankees. He went 6.1 innings, allowing two runs off five hits. His first six innings were scoreless, but a towering blast off the bat of Kyle Schwarber was responsible for the two runs in the seventh.

Gleyber Torres came through once again on Sunday, this time hitting his first home run of the season. One of the biggest worries this season has been the play of Torres, but it seems that he’s finally getting into a grove after a productive series. And finally, Giancarlo Stanton played hero for the Yankees on Sunday, lining a walk-off single in the bottom of the ninth.

These are all good signs for the Yankees’ offense; Torres is slowly looking like his normal self, Giancarlo Stanton is staying hot, and even Aaron Hicks is finally starting to hit the ball. Luke Voit is expected to return to the lineup on Tuesday, and the team has momentum off the walk-offs.

Although this MLB season has featured less offense than anticipated, it’s hard not to worry about the team with the nickname of “The Bronx Bombers”. However, it must be noted that the team is making serious offensive strides, even though it’s not fully showing in the stats.

As the team hits the road for a nine-game trip, the Yankees need to build off their successful homestand. With many other teams struggling out of the gate, the Yankees need to take advantage of it and return home with a winning road trip. The Rays, Orioles, and Rangers loom ahead, meaning the Yankees will have plenty of opportunities to win games and make a dent into Boston’s divisional lead.