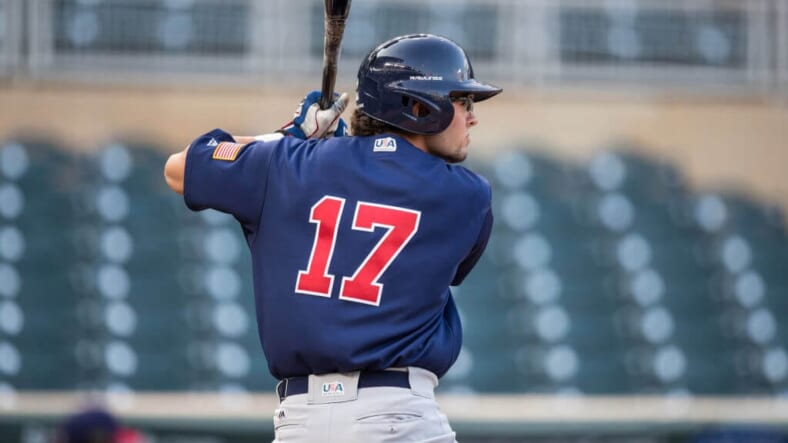 After taking the 2020 season off due to the COVID-19 pandemic, Minor League Baseball is finally set to resume play. In the 18+ months since the last MiLB action, the entire farm system structure has changed, including a few affiliates being swapped for the New York Yankees. Scranton remains the Triple-A affiliate for the team, however, the Double-A affiliate is now the Somerset Patriots. Tampa has dropped down to Low-A, while the Hudson Valley Renegades have filled their spot as the High-A affiliate.

With Minor League Baseball resuming, that means that there will be plenty of prospects to keep an eye on throughout the season. Here is one prospect to watch for on each Yankees’ affiliate.

2021 1st round draft pick Austin Wells will make his minor league debut with the Tampa Tarpons this week. Wells, 21, impressed throughout Spring Training and is a likely candidate to replace Gary Sanchez in the future.

That being said, Wells’s progression is something to keep an eye on throughout the season. If Wells performs well in 2021, he could potentially make it to Double-A come September, putting him in a position where he could be MLB ready by the end of the 2022 or the beginning of 2023.

Ranked 7th in the Yankees orgamization, Luis Medina is looking for a breakout season in the minors in 2021. He struggled in 2018 and 2019 in A-Ball, however, he’s two years older now and has had a ton of time to develop. The Yankees are very high on him and he could be an arm in the MLB rotation in a few seasons.

With prospects Clarke Schmidt and Deivi Garcia already proving themselves as MLB quality pitchers, Medina is essentially the No. 2 pitching prospect in the organization, only behind Luis Gil. If Medina starts off strong in 2021, he could quickly see a promotion to Double-A.

Despite making his MLB debut in 2020, Estevan Florial finds himself in Double-A to begin the 2021 season. Currently the Yankees No. 2 outfield prospect behind Jasson Dominguez, Florial could potentially be an impact player for the Yankees this season. The team hasn’t had much production out of outfielders Clint Frazier, Aaron Hicks and Brett Gardner, meaning Florial could potentially be in the mix.

If Florial were to make the MLB roster at some point, a strong performance for him is key to his Yankee future. With Dominguez likely MLB ready in 2023, Florial would like to show that he belongs on the Yankees’ roster and that Dominguez’s route to the majors isn’t as easy as it’s hyped to be.

Picking Deivi Garcia as the player to watch for this season in Triple-A is a difficult one. Many players on the Scranton/Wilkes Barre Railriders are either MLB veterans or lower-ranked prospects who have already made MLB appearances. However, with the expectation that Garcia will start games next season with the Yankees, we’ll go with Garcia.

2021 will likely see Garcia jump back-and-forth between the Triple-A and MLB roster, but he should hopefully get 25ish starts between the two teams. If Garcia can succeed at both levels this season, then it’ll put him in great shape to have a permanent MLB roster spot in 2022.