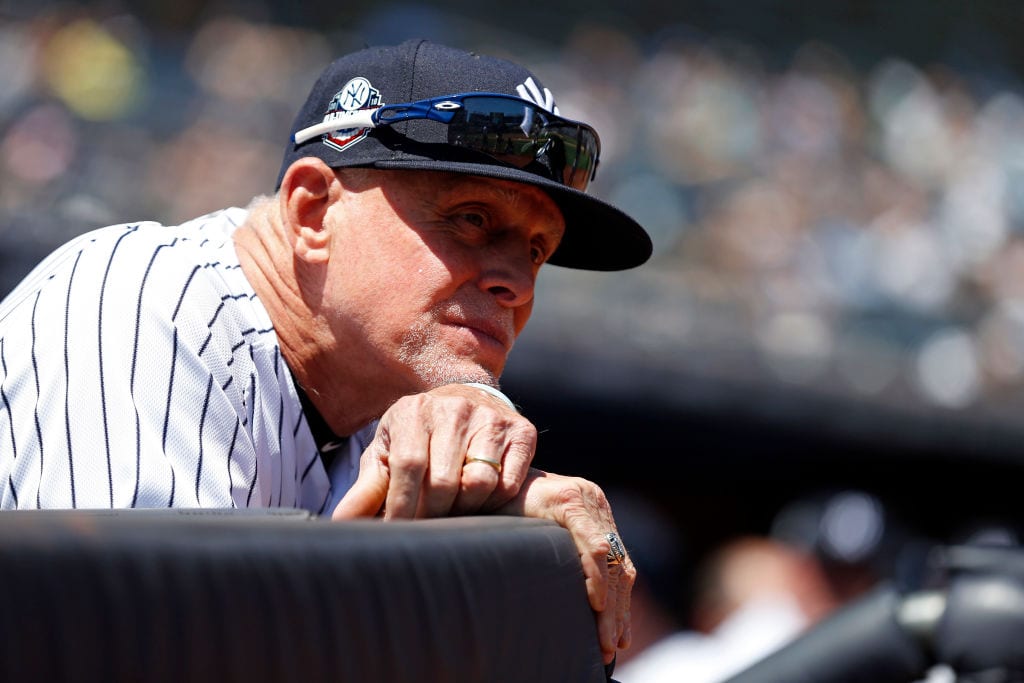 The New York Yankees have been blessed with some of the greatest baseball players to ever play the game.Â  One of those players is Ron Blomberg.

Ron Blomberg played for the Yankee from 1969 and 1978 and is one of the most unsung Yankee players. Blomberg is mostly known today as one of the old guys who shows up annually for the Old Timerâ€™s Day Game. What few remember is the Blomberg is usually recognized as the first designated hitter in baseball. In his ten years being a DH and outfielder for the Yankees, he hit .302. In his first plate appearance as a DH in 1973, he walked with the bases loaded and won the game against the Red Soxâ€™s Luis Tiant. The bat he used is in the Baseball Hall of Fame Museum.

Blomberg, now celebrating his 72nd Birthday today recently spoke about his hope for a baseball season this year and the Yankee broadcasters he has known for years and calls fiends. He also talks about the admiration he has for the Steinbrenner family.

â€œOn a day where we hope baseball is going to start, I want to reach out to the engines that really make the Yankees go. I had an opportunity to have three great broadcasters in Bill White, Frank Messer, and Phil Rizzuto, who all became my dear and best friends in the game of baseball. Phil Rizzuto named me Boomer when I hit a home run off Nolan Ryan that almost hit the faÃ§ade in right. Holy Cow, heâ€™s the Boomer!
Now the Yankees have 3 great ones that I consider to be dear friends in John Sterling, who has been my friend for 40 plus years, and he was at the hospital at Mt Sinai when my son Adam Blomberg was born. John is happy in knowing that my son is now chief anesthesiologist in Miami and in charge of over 4000 doctors.
Michael Kay; I found out 30 years at an Old Timersâ€™ Day game that I was his favorite player growing up because I was Jewish. Michael Kay, thank you for having me on your show and calling me the Abraham Lincoln of baseball. And of course, Suzyn Waldman, who became my friend in recent years. I respect her and think she is excellent with John Sterling. People should be so grateful that the Yankees put 3 great people in their broadcasting booth.â€

Some other notable New York Yankee broadcasters are Arch McDonald and J.C. Flippin, who are both before my time. But from the time I became a Yankee fan in 1950, Mel Allen was the man. He broadcast Yankee games from 1939 to 1964 along with Red Barber. Other famous Yankee broadcasters were Jerry Coleman, Joe Garagiola, Bill White, and Bobby Mercer. Today along with John, Michael, and Susan, Ken Singleton, David Cone, Jack Curry, John Flaherty, Bob Lorenz, Meredith Marakovits, Paul Oâ€™Neill, and Ryan Ruocco hold down the booth. My all-time favorites are Mel Allen, Phil Rizzuto, Bobby Mercer, and Micheal Kay.
One broadcaster that stands out in this writerâ€™s mind is Al Leiter, the former Mets and Yankee pitcher who is no longer with the broadcast team (he left after the 2018 season). He is now an analyst for the MLB Network.Â  I loved listening to him, his knowledge of the game, and his ability to explain it was captivating.Â  His only fault was he didnâ€™t always know when to shut up.
Ron, also spoke about his relationship with the late George M. Steinbrenner and his admiration for the Steinbrenner family:

When I joined the New York Yankees they were owned by CBS. They didnâ€™t really care about winning and losing and didnâ€™t put any money into the team. When George Steinbrenner bought the team in 1973 he came into the clubhouse and sat down with the team and told us he was going to do whatever it takes to win. He wanted to bring a Yankee championship back to the fans and the city. He personally told me to tell him what I needed to help get that job done.
George was the best owner and best person I ever met in the game. In many respects he was like a second father to me. At the time Jennifer, Hal and Hank were just babies.I still go back to the stadium often during the season and Jen and Hal would always tell me that their father loved me and that they love me too. George appreciated that I always gave 110% percent.
The Steinbrenner Family are the greatest people and run the greatest organization in the Yankees. Georgeâ€™s goals were to win championships and make the fans proud.George Steinbrenner belongs in the Hall of Fame!â€