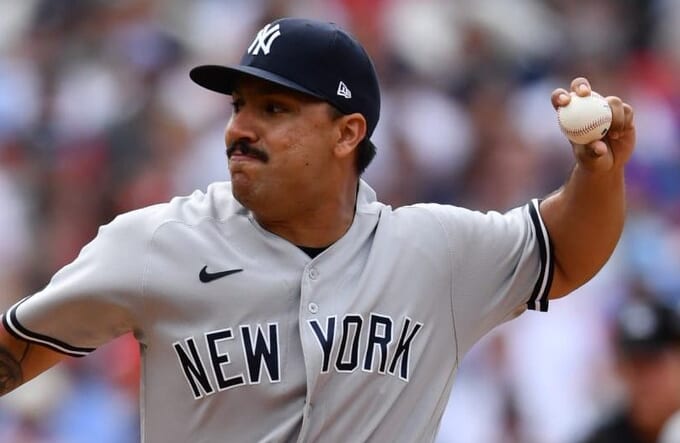 Last night the New York Yankees won a game against the Baltimore Orioles, their second and their first series win after losing five in a row. With the win, the Yankees are now tied with the Toronto Blue Jays for the first wild card spot. The Yankees won last night 4-3.

Nasty Nestor is even nastier

If there are any Nestor Cortes Jr. detractors, I don’t know where they are. Cortes has been a reliever turned starter that has been a Godsend for the Yankees. He got the nickname “Nasty Nestor.” Last night he was was absolutely brilliant, proving he could even be nastier, getting a season-high 11 strikeouts and going deep into the game, saving a worn-out bullpen.

At face value, Cortes does not seem to be a great pitcher; he has no blazing fastball, no one put out pitch. His secret is confusing hitters with so many different arm-angle deliveries and so many different pitches thrown at different times. The confusion he insights causes many swings and misses. His confidence is also disarming. He is only 2-2, mostly due to lack of support, but his 2.60 ERA in 12 starts is telling. During September, he has 23 strikeouts over 3 starts and an ERA of 2.00

Brett Gardner “it’s not over till it’s over”

At the end of the 2020 season, many, if not most, Yankee fans felt Brett Gardner’s time with the Yankees was coming to a close. Just days before the start of the 2021 season Gardner still had not been re-signed, but in the final days of the offseason, Gardner and the Yankees came to a deal bringing the 14-year veteran back for yet another year. Most of this was powered by Gardner’s desire to play at least one more year with fans in the stands.

When the Yankees resigned him, the plan was to use him as a versatile bench player. The reality is that he has been anything but that, playing in 124 games to date, mostly due to the need to have him on the field with the many outfield injuries, especially to Aaron Hicks, causing Gardner to be the teams’ everyday centerfielder. But now, in the postseason run, Gardner has become a must-be in the lineup, hitting .325 in September. For some fleeting reason, Gardner has heated up in September and has helped the Yankees reach the postseason in the last three seasons.

Like the heralded legend Yogi Berra once quipped, “it’s not over till it’s over.” Though never the team’s superstar, Gardner shows us he still has much to give the Yankees, excellent defense, excellent baserunning, and, yes, hitting. Last night in the ninth, Brett Gardner’s bloop single gave the Yankees the win. He went 3 for 4 with 2 singles and a double driving in two of the Yankees 4 runs. Mister September?

Torres still troublesome in the infield

The Gleyber Torres experiment that manager Aaron Boone thought might resolve Torres’ problems both in defense and at the plate has not gone as intended. Boone completely realigned the infield to allow Torres to play at second base. The move caused Gold Glover DJ LeMahieu to move to third base and hot corner defender Gio Urshela to shortstop.

Last night Torres in as many games got made his second blunder at second base. Although neither were called errors, the lack o focus could have cost the Yankees big time. Tuesday night Torres bobbled an easy double-play ball. Last night was only worse; he doubled up on his lack of focus by throwing to first instead of second, losing out on another double play that could have lost the game for the Yankees had it not been for Brett Gardner’s bloop single in the ninth.

Someone in management must be wondering if it’s time to cut loose of the infielder that can’t provide adequate defense, no matter where he plays.