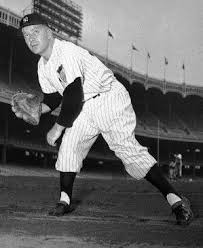 Lopat just missed being a Yankee legend. He pitched eight years with the New York Yankees. During his time with the Yankees, he had an outstanding career going 113-59 with an ERA of 3.19. He was an All-Star and a three-time MVP candidate. Lopat had four years with 15 or more wins. In 1951 he would have 21 wins, and in 1953, he had a winning percentage of .800, going 16-4. In 1953 he led the American League in both earned run average and won/lost percentage. Feel free to comment on any Yankee you remember as an unsung Yankee hero.

It would be hard for David Robertson to become a huge star with the Yankees being constantly overshadowed by future Hall of Fame closer Mariano Rivera.  But nevertheless, he made his mark in his two stints with the Yankees. He pitched for the better part of 9 seasons; he would go 38-22 in 501 games. Even though he never started a game for the Yankees and often being called in in a rough situation, he managed a career of 2.75 ER

Ron Blomberg is one of the most unsung Yankee players. Blomberg is mainly known today as one of the old guys who shows up annually for the Old Timer’s Day Game. Few remember that Blomberg is usually recognized as the first designated hitter in baseball. In his ten years being a DH and outfielder for the Yankees, he hit .302. In his first plate appearance as a DH in 1973, he walked with the bases loaded against the Red Sox Luis Tiant. The bat he used is in the Baseball Hall of Fame Museum.

Wang is an interesting story while being sad at the same time.  The New York Yankees got Wang from his homeland of Taiwan, where he was a huge pitching star.  He was projected as a possible ace for the Yankees. In his first rookie year, he pitched to a 4.02 ERA. In his second year, he was 19-3 with an ER of 3.63. In 2007 he would come in second in the Cy Young Award Voting. He pitched two consecutive 19 win seasons. Then his future was turned upside down when he was injured running the bases. He would never return to form and never become the next big Yankee pitching star.

During his nine years of Major League Baseball service, all with the Yankees, Selkirk appeared in 846 games, batting .290 (.265 in 21 World Series games), with 108 regular-season home runs, 131 doubles, 41 triples, 810hits, and 576 RBIs. Selkirk earned the nickname “Twinkletoes” for his distinctive way of running on the balls of his feet. Selkirk twice in his career recorded 8 RBI in one game, both against the Philadelphia A’s at Yankee Stadium after World War II; he managed at the A and triple A levels for the Yankees.

Joe Dugan is a New York Yankee player that most fans have not only not seen him play but probably have never heard of. He batted in his seven Yankee years .286 and was an MVP candidate in 1925. Although he was never a home run hitter, he had five straight seasons hitting over 100 hits on the season. But what made Dugan a Yankee worth remembering is that he was an excellent defender at the hot corner, leading the American League as a third baseman in fielding percentage in four consecutive seasons.

Ralph Terry was a Yankee pitcher for seven years in two different stints. In 1962 he had a 23 game winning season going 23-12 with a 3.19 ERA. He only had a no-decision in four games started. He also led all of baseball in wins in 1962. He was known as a “finisher.” In 1963 he completed a career-high 18 complete games

Aaron Small is an interesting story that I remember well. Aaron Small was a Journeyman pitcher. Aaron Small was about to call it quits. He spent most of his career in the minors, and he wasn’t pitching well enough to be a serious contender for a spot in the New York rotation in 2005. Then, an injury bug hit, and Small found himself with a spot start in July. He would pitch well and would get a win. Small would then go on a tear, he ended the year 10-0, with a 3.20 ERA. Small the 33-year-old, his 2005 season helped the Yankees to clinch the division title.

Little Ronald Torreyes (5? 8,” 151 pound) was a fan favorite super-utility infielder for the New York Yankees for three seasons under manager Joe Girardi that frequently used Torreyes. He hit .281 for the Yankees, but 2017 was his breakout year when it seemed whenever Girardi would put him in for a hit, he seemed to not disappoint. In 2017 he led the team in batting average at .314. When Aaron Boone was named Yankee manager, Torreyes was traded to the Chicago Cubs.

Cecil Fielder was never a big star with the Yankees, but in his two years, he hit .260. The All-Star and MVP candidate with the Detroit Tigers was traded to the Yankees. In just 151 games, he managed 26 home runs. Overshadowed by the likes of Derek Jeter and Bernie Williams, he never really endeared himself to Yankee fans. He had the distinction of winning the Babe Ruth Award for outstanding performance in the 1996 postseason. The Yankees would go on to win the World Series against the Atlanta Braves.