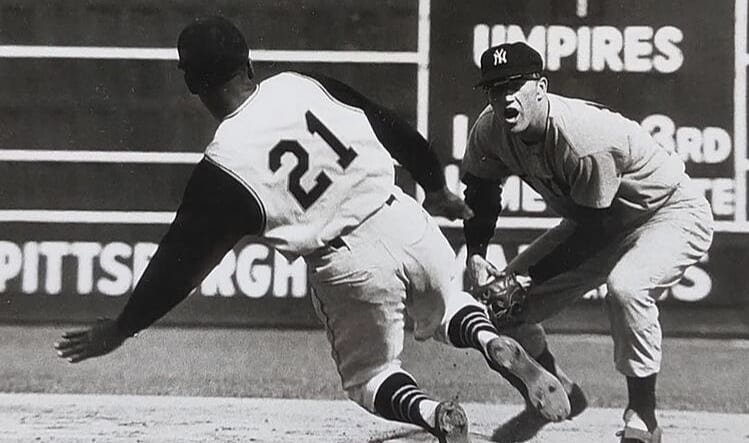 The New York Yankees have been blessed with some players that have become Yankee legends over the years. Some because of their iconic play, some due to their community service, and others because of the Yankee fan’s admiration for a collection of reasons. Over the illustrious 120 year history of the Yankees, they have had some of the most talented men ever to play the game of baseball. Tony Kubec (1957-1965) is one of those players. He had a 39-year career in baseball.

Anthony Christopher Kubek was born on October 12, 1935, in Milwaukee. He was the only boy of three children born to a father that was an outfielder with the Milwaukee Brewers of the American Association but did not make it to the major leagues. Instead, he went to work in a tannery, a tool and tie plant, and a brewery and then found some security working for the Post Office. Tony had two sisters, Carol and Christine. With his father in baseball, he learned to play at a young age.

He was a multi-talented sport freak the excelled at baseball, football, and track at Bay View High School in Milwaukee. After his freshman year, the school would drop the baseball team. But that wouldn’t stop Tony from playing as he found several sandlot teams to play for. One day in 1952, at the age of 16, Kubek would be noticed by a Yankee scout Maguolo and invited to participate in the Hearst Sandlot Classic at Yankee Stadium. The exhibition game would pit the New York All-Stars against players from all over the country. Kubek caught the attention of the many scouts at the game. Tony wanted to play for the Yankees and take Phil Rizzuto’s place as the Yankee shortstop, so he signed with the Yankees in 1954. He played just over two years in the minors for the Yankees, and he attended Casey Stengel’s instructional course at each spring training.

In his last season in the minors, Tony would hit .334 with 14 home runs while with the Denver Bears. While there, Kubek formed a strong friendship with Bobby Richardson, his keystone partner, for nine seasons in New York. Kubek’s manager at Denver would be Ralph Houk, who would also manage him later with the Yankees. In 1956 Stengel would work the young Kubek hard in spring training to prepare him for the majors. He would play him all over the field and usually for nine innings. So naturally, Stengel wanted to see as many bats from him and how he ran the bases.

Tony would debut at the beginning of 1957, playing in the outfield, then the shortstop and 3rd base. At the plate, Tony would start slow, hitting only .243. But in June would have a long hitting streak and raise his batting average to .312. That year the Yankee would win the pennant and be in the World Series against the Milwaukee Braves. Now that the Braves left Boston and were in Milwaukee, his family and friends could watch him play. Unfortunately, for the first-year Yankee, he would have a throwing error that would cost the Yankees the series. But, non the less he would win the Rookie of the Year Award.

Due to his excellent play at short during his rookie year, he was awarded the starting shortstop, moving Gil McDougald to second. Kubek was awarded the Rookie of the Year Award. They made quite a dynamic pair in the infield, Kubek turned 98, and McDougald turned 97 double plays. He would end the season in 1957, hitting .297. 1958 would not be a good year for Tony as he had a few injuries and lost 32 points off his 257 batting average, but still, be an All-Star but would not play in the game. After the season, he was to fulfill six months in the military but was released early in March. Thus, he was ready to begin the season in 1959. Casey Stengel was famous for platooning players, and Kubeck and McDougald would share the Shortstop position while Bobby Richardson would defend second. The Yankees would come in third in the division.

During 1960 the Yankees would regain their winning ways. A year in which Kubek would get his second MVP nomination. The Yankees would again win the pennant. In the World Series Game 7, Kubek would be badly injured when a lousy hop caused a ball to hit him in the throat. The Pirates won the World Series. Kubek would go on to play for the Yankees until 1965, mainly as a shortstop. In 1962 he would have a career-high batting average of .314. All and all, Kubek would play 1,092 games for the Yankees; his 38 doubles in 1961 would be a record that held until 2004. He was an All-Star three times and an MVP candidate three times as well. The 1965 season would see Kubek’s average drop to .218 while still being an excellent defender at shortstop.

After the season, he would retire from his 9-year career, all with the Yankees.
Kubek being a fan favorite, quickly moved into the field of announcing and commentating on NBC’s game of the week. He would develop an association with Bob Costas and provide color for at least a dozen World Series and Championship Series nationally. As well, he did local telecasts for the Toronto Blue Jays along with All-Star games. At the Baseball Hall of Fame, he would receive the Ford C. Frick Award and enshrinement into baseball’s Hall of Fame broadcast wing. He was also inducted into the Canadian Sports Hall of Fame.

Kubek is presently 86 years old. He and his wife Margaret reside in Appleton, Wisconsin. They were blessed with two sons, two daughters, and five grandchildren. He had made only one appearance at Old Timer’s Day at Yankee Stadium in 1986 when it was the 25th reunion of 1961 players.