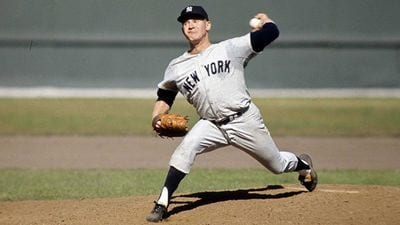 Today, the New York Yankees morn the loss of a baseball season, but there will be others. More significantly, they morn the loss of not only a Yankee legend but a baseball legend that will never be replaced.Â  Yesterday, before the Yankee loss to the Tampa Bay Rays, the Yankees learned that the great Whitey Ford had passed away at his Long Island home on Thursday night after an illness. Ford was 91 years old.

Yesterday, the Yankees had time to emblazon all the Yankee uniforms with the number 16, in tribute to Whitey Ford’s number. It was kind of ironic as the great Yankee pitcher spent his entire 16-year career with the New York Yankees.

For many of you aged one to fifty, you remember Whitey Ford as that old guy that showed up every year at the Yankee Old Timers Day celebration and game at Yankee Stadium. You watched him age through the years and last year, not take part in the celebration and game, but only stand atop the Yankee dugout and wave his cap to the crowd, but with thunderous applause.

For me, as a young boy, I watched Ford pitch. It was a different time and a different atmosphere.Â  Today you can watch baseball 24/7. When I was a boy, you had to wait for the ABC game of the week or other nationally televised events. I remember clearing my chores so I could watch Whitey Ford pitch in that Sunday afternoon game. Back then, you read more about baseball than you saw games played. I was a New York Yankee fan when my Grandfather bought us our first television, and we watched together the 1951 World Series.

My baseball idols were Phil Rizzuto, Yogi Berra, Bobby Richardson, Mickey Mantle, and yes, Whitey Ford. Much like when Mariano Rivera took the mound in the ninth, you knew that the game was won. When Whitey Ford took the mound, you knew that he would win.Â  And that he did, Ford was the winningest Yankees pitcher ever (236), he also holds the record for the most Yankee shutouts (45). In the New York Yankees history, only Andy Pettitte started as many games, but Ford beats him out in innings pitched (3.170).

He was a Cy Young Award winner; he was a ten-time All-Star and six-time World Series champion. In 1961, a World Series Most Valuable Player. Ford led the American League (AL) in wins three times and earned run average (ERA) twice. In the past several years, we have lost many great Yankees, Phil Rizzuto, Mel Stottlemyer, Yogi Berra, Don Larsen, and others, now we have lost the great Whitey Ford, but for those of us that watched him pitch, his memory will live on.Â

Ford was a local boy, born in Queens just a few miles from the Bronx. As a child, Ford played baseball and stickball in the summer in the sandlots of the Queens, football in the fall, and roller hockey in the winter. During the summers, Ford and his friends played sandlot baseball until dark on fields next to the Madison Square Garden Bowl, about a mile from his home neighborhood. When not playing there, he and his friends would play stickball against a wall using a broomstick.

Several neighborhood fathers got together and bought uniforms for their sons. They organized a team for the 13-year-olds, called the Thirty-fourth Avenue Boys. The group stayed together for five years. Fordâ€™s childhood baseball hero was Joe DiMaggio, who he got to see when he and his Father boarded the Subway for the trip to Yankee Stadium.

In Fordâ€™s senior years of highschool In April 1946, he attended a Yankees tryout camp at Yankee Stadium as a first baseman. Paul Krichell, a Yankees scout, noticed Fordâ€™s strong-arm during fielding practice. It was thought he was too small to play first base but had him throw a few pitches on the sidelines and showed him how to throw a curveball. He alternated every other game by pitching and playing at first base, in the summer after he graduated by playing with the Thirty-fourth Avenue Boys. The team went 36-0 to win the Queens-Nassau semipro league, with Ford winning 18 games without a loss when pitching.

Whitey was signed by the Yankees in 1947 as an amateur free agent and was assigned to the minor leagues. During this time, he got his nickname â€œWhiteyâ€ for his nearly albino blond hair. He made his major league debut on July 1, 1950, and let it be known that he was a force to be reckoned with. He won his first nine games in a row. He was named AL Rookie of the Year by sporting news. One thing most of todayâ€™s fans are not aware of is that his record would probably be even better, had Casey Stengel not saved him for the bigger games.

In 1951 Whitey would marry his wife, Joan. After the wedding, the Fords delayed their Florida honeymoon for three days so that Whitey could throw out the first pitch at the Yankeesâ€™ 1951 Opening Day in Yankee Stadium. They lived on Long Island and raised two sons and a daughter. After his first very successful first year with the Yankees, he served the next two years during the Korean War in the Army.

When returning to the Yankees in 1953, he showed he hadnâ€™t lost any of his skills, going 18-6 on the year and pushed the Yankees to their fifth World Series win in a row. In 1954 the Yankees were loaded with great players and fully expected to win their sixth straight pennant and World Series. They won 103 games, more than in the past five seasons. But lost to the Cleveland Indians in the ALCS, who would lose the World Series to the Giants.

In 1955 Ford would go 18-7, but the Yankees would not win the World Series again. In 1956 Ford would pitch even better, going 19-6. Ford was 27 years old at the beginning of the 1956 season and started off winning his first six starts while giving up only five runs. He had a minuscule 0.83 earned run average. He would have had 20 wins, but when the Yankees clinched, he decided to forgo his start and save it for the World Series. The Yankee defeated the defending Brooklyn Dodgers in the Series.

The Yankees would again win the World Series in 1958 against the 1957 Champion Milwaukee Braves. In 1961 Whitey was to have his best season ever. He went 25-4 with a 3.21 ERA. He again would be an All-Star and would win his Cy Young Award. In early September, the Yankees held â€œWhitey Ford Dayâ€ before a game against Cleveland, in appreciation of his outstanding season and perhaps to make up for being overshaded by the home run race of Mickey Mantle and Roger Maris.

The club showered him with gifts, including a six-foot package of Life Savers wheeled in from the bullpen. When it arrived on the mound, out popped the other top Yankee, Luis Arroyo. Ford took the joke all in good humor. The Yankees would go on to win the World Series in five games against the Cincinnati Reds, their 19th World Series win.

Ford had three nicknames; Whitey was one of them due to his light blonde hair. He was also called â€œSlickâ€ by manager Casey Stengel. But the nickname that has always stuck is â€œThe Chairman of the Board.â€ He got that moniker due to Stengel saving him for big games, and his ability to withstand high-pressure situations with an easy calm while remaining in complete control of a situation.

Ford would go on to have four more winning seasons, including another World Series win in 1962. the last success for the next 15 years. During his career, he had 13 seasons with eleven wins or more. His second best was the 24-7 season in 1963. He will go down in history as one of the greatest Yankee pitchers of all time.

â€œToday all of Major League Baseball mourns the loss of Whitey Ford, a New York City native who became a legend for his hometown team,” Commissioner Rob Manfred said. “Whitey earned his status as the ace of some of the most memorable teams in our sportâ€™s rich history. Beyond the Chairman of the Boardâ€™s excellence on the mound, he was a distinguished ambassador for our National Pastime throughout his life. I extend my deepest condolences to Whiteyâ€™s family, his friends and admirers throughout our game, and all fans of the Yankees.â€

Thursday night, October 8, 2020, surrounded by family in Lake Success, New York, the great Whitey Ford, while watching the Yankees play on tv, passed away twelve days short of his 92 birthday. Whitey, may you rest in peace knowing that you were loved by Yankee fans everywhere.

EmpireSportsMedia.com’s Columnist William Parlee is a member of the Society for American Baseball Research. You can follow me on Twitter @parleewilliam.