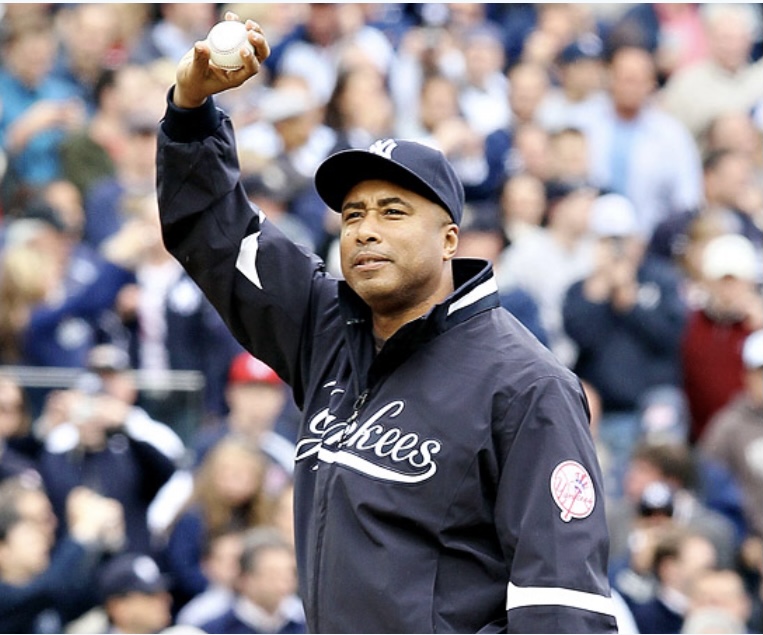 The home run postseason record belongs to Manny Ramirez, who has 29 long balls. But second, on the list is New York Yankee Bernie Williams with 22 homers. Last night in Houston in the seventh inning Jose Altuve joined Williams with his 22nd long shot to left.

Let’s take a look at those exciting records. Ramirez played in 11 postseasons for the Indians, Red Sox, and Dodgers got 493 plate appearances (third all-time) and slugged a typically robust .544. In Game 2 of the 1995 ALCS, he got his first two postseason home runs. Most Yankee fans know him for his time with the Boston Red Sox when he was MVP of Boston’s 2004 World Series, the first Fall Classic the Sox won since 1918. They lost three games in a row in the ALCS against the New York Yankees but came roaring back to advance to the World Series. Manny, at age 36, was still cracking the long ball for the Dodgers when he hit four homers in eight postseason games.

Bernie Williams was one of the most popular New York Yankees but wasn’t known as a tremendous power hitter during his playing days. His most remarkable number in a season between the 90s and the 2000s was 30 long balls. But with the Yankees winning ways in those seasons, he had many opportunities to hit homers, and he did, 22 of them. One of the best center fielders to play for the Yankees he was MVP of the 1996 ALCS against the Baltimore Orioles. He homered once in the series, but his second shot that year was an 11th inning walk-off homer in Game 1 of the World Series. He finished that year’s championship series with six long balls. In 1999 he added his name to David Ortiz and Carlos Correa as the only Yankee to end two different postseason games with a home run.

Last night Houston’s Jose Altuve matched Williams’s record with his 22nd postseason home run. Unfortunately for Altuve, his record will always be tainted by his involvement in the cheating scandal proven by MLB. Many believe the Astros cheated in other seasons as well but weren’t caught. In the 2017 ALCS, they excluded the New York Yankees from a World Series appearance and Aaron Judge as an MVP. There is no question that Altuve is a great baseball player, but hanging around his neck will always be that he was a cheater. In the postseason, he holds the record for the most first-inning home runs (7); in 2017 (the proven cheating year), he hit three homers in the ALDS against the Red Sox. For Yankee fans, his long ball against Aroldis Chapman in game six of the 2019 ALCS still stings as it sent them to the World Series. Yankees fans are still happy that the Nationals beat them in the Fall Classic and hope the Atlanta Braves will do the same this season.

Today, let’s look back at Bernies Williams’s career with the New York Yankees. Bernabe Williams Figueroa Jr. was born on September 13, 1968. But, first, let me clear up a misconception that many fans have. They think he is Puerto Rican; actually, he is an American citizen born in the Bronx near Yankee Stadium and didn’t move to Puerto Rico with his family until he was one year old. His father was a merchant marine, and his mother a college professor. As a child, Bernie played baseball in the sandlots of San Juan but also learned the guitar and had a penchant for classical music.

In Bernie’s early teen years in Puerto Rico, he ran track and field and won a Gold medal in the 200 meters and Silver in the relay in international competition, all while playing baseball. Then, in 1985 just shy of seventeen, he was noticed by a Yankee scout who wanted to sign him, but he was too young. So they did the next best thing and put him in a training camp in Connecticut and signed him on his 17th birthday. During this time, Bernie was conflicted about seeking a medical career or looking to baseball for his future. Luckily for Yankee fans, he finally chose baseball.

The Yankees assigned him to double-A Albany, while there, he honed his skills as a switch hitter. Finally, at the age of 23, on July 7, 1991, Bernie advanced to the stadium to replace Roberto Kelly; he batted .238 but was demoted back to the minors upon Kelly’s return, only to be called back up when Danny Tartabull was injured. That’s when he took his place in center field. This is where I will put in my two cents that the homegrown Bernie should have been a member of the “core four” (Jeter, Posada, Pettitte, Rivera), making it the core five as he was just as responsible for the dynasty years as the other four.

By 1993 William had become the regular center fielder for the Yankees. He was .268 and a favorite of the then Buck Showalter in his first entire season, but the “boss” wanted him used as a trading piece. He cited his average throwing arm and lack of home runs. The Yankees did keep Bernie even though he was considered trade bait more than once. In 1995 Bernie had his break-out year had 18 home runs, the most hits and stolen bases on the season and in the postseason batted .429. In 1996 Bernie just got better, and in the postseason, he batted .467 and shined in defense of center in the ALDS against Texas. In the ALCS against Baltimore, he hit an 11th inning walk-off home run. He hit two homers in the ALCS and was named its MVP. He had only four hits in the World Series, but the hits were RBI’s, and the clutch Williams led the Yankees to their first World Championship in eighteen years.

In 1997 William was again almost traded to the Tigers for a trio of young pitchers, but then-general manager Bob Watson blocked the trade. During the 1998 season, when the Yankees went 114â€“48 to set a then-American League regular-season record, Williams finished with a .339 average, becoming the first player to win a batting title, Gold Glove award, and World Series ring in the same year. He finished the season with a .339 average. After the 98 season, Williams signed a seven-year deal with the Yankees worth $87 million.

The Red Sox and the Diamondbacks also bid for his services during his free agency, but Bernie became a lifelong Yankee. For the length of the contract, the Yankees made the playoffs every single year. As a result, Williams continued to add to his postseason statistics, placing in the top 10 of various career postseason categories; the last year of his contract proved to be a difficult one for both Bernie and the Yankees. Bernie’s average arm was diminished, and it showed in his fielding and batting. He played in 99 games in center and 22 as DH. The Yankees did not pick up his $15 million option, and Bernie was once again a free agent.

Cashman and Bernie eventually worked out a deal and an one year contract. 2006 would see injuries to Gary Sheffield and Hideki Matsui, which caused Bernie to get a lot of playing time covering the corners and resting center fielder Johnny Damon. In the same year, Williams would play in the World Classic and hit two home runs. On July 26th, he hit his 2,300th hit becoming only the 11th active player to reach that record. He also hit his443rd double in August of the year.

After Bernie’s contract ended in 2006, he played with the Puerto Rican league for a short and unsuccessful time, as injuries sidelined him. In 2007 the Yankees offered Williams an invitation to spring training as a non-roster invitee, giving him a chance to compete for a job. Williams, however, wanted a guaranteed roster spot and declined the invitation. In 2008 ceremonies at the closing of the old stadium, he returned to the stadium and was introduced as the last dignitary to the field. He received a near 2-minute standing ovation from the adoring Yankee fans. Bernie retired from baseball as a Yankee on April 24, 2015. On May 24, the Yankees unveiled Williams’s plaque in Monument Park and retired his number in a ceremony at Yankee Stadium. I will repeat my thought that it should have been the “Core Five.”

During Derek Jeter’s last game as a Yankee, Bernie played his rendition of “take me out to the ball game” on guitar in pre-game ceremonies honoring Jeter. When he took his place in centerfield, his play was delayed by both Red Sox and Yankee fans cheering from the stands with “Bernie Williams, Bernie Williams.” “Burn baby burn” is still one of the most famous living New York Yankees.