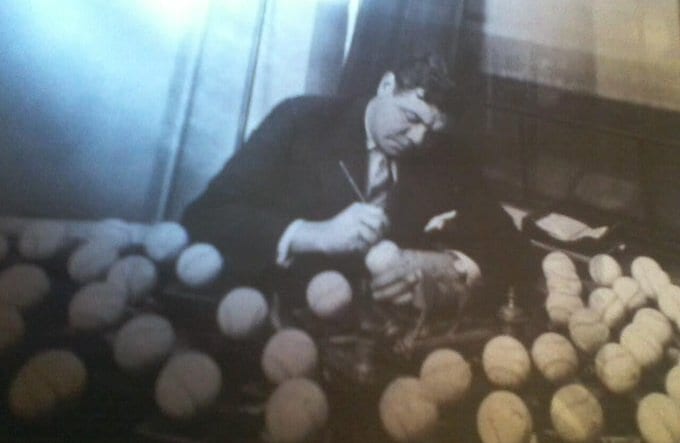 The life story of the “Babe,” Gorge Herman Ruth

It’s July 11, 1914, and this afternoon Babe Ruth will make his MLB debut as a pitcher for the Boston Red Sox at Fenway Park.

George Herman “Babe” Ruth born in 1895 is the greatest baseball player to have ever to play the game. He would go on to hit 714 home runs, 2,213 RBI’s, over 2,000 bases on balls, with a slugging percentage of .690 and an OPS of 1.164, two records that still stand today. He was not only a great baseball player but still, today stands as one of America’s greatest sports icons in American culture.

So goes the story of the real Babe Ruth that few know about. Ruth was born in Baltimore Maryland. With his father working long hours in his saloon and his mother often in poor health, Little George (as he was known) spent his days unsupervised on the waterfront streets and docks, committing petty theft and vandalism. Hanging out in his fatherâ€™s bar, he stole money from the till, drained the last drops from old beer glasses, and developed a taste for chewing tobacco.

He was only six years old. Having been declared incorrigible at the age of seven by the Baltimore courts, his parents sent him to St. Maryâ€™s Industrial School. After a month passed they brought him back home to see if he had changed and reconciliation could be achieved, he hadn’t and it would lead to several attempts by his parents. in 1904 at the age of nine, Ruth would meet the Roman Catholic Brother Matthias at St. Mary’s.

Later in life when asked about Brother Matthias, Ruth would say. He changed my life, â€œHe taught me to read and write and he taught me the difference between right and wrong, He was the father I needed and the greatest man Iâ€™ve ever known.â€ Ruth would end up living his young life at the school until the age of eighteen. During that time his mentor would throw balls at the boys to catch. Young George was thrilled to catch and throw the ball. He imitated the Brother’s hitting style, holding the bat at the knob and taking big swings.

As he grew older he began to actually play baseball at St. Mary’s. In one St. Maryâ€™s game in 1913, Ruth, then 18 years old, caught, played third base (even though he threw left-handed), and pitched, striking out six men, and collecting a double, a triple, and a home run. That summer, he was allowed to pitch with local amateur and semipro teams on weekends. Impressed with his play a Baltimore scout Jack Dunn signed Ruth to his minor-league Baltimore Orioles club the following February.

The Orioles short on money sold the young Ruth to the Boston Red Sox. Just five months after leaving his home at St Mary’s, he was on the mound for his major league debut on July 11, 1914, at Fenway Park. He won that game 4-3 but lost his second game. Ruth was benched and finally sent down to the minors. Ruth returned to Boston for the final week of the 1914 season. On October 2, he pitched a complete-game victory over the Yankees and doubled for his first major-league hit.

During the offseason, the Babe married his girlfriend Boston waitress Helen Woodford. In the following season, he shined for the Sox, winning three complete games in a span of nine days in June. Between June 1 and September 2, Ruth was 13-1 and ended the season 18-8.

The personality of the younger Ruth began to show it’s head as he caroused at night and began to argue with umpires. In one game feeling squeezed by home plate umpire “Brick” Owens, Ruth stormed off the mound and punched Owens in the head. He had to pay a $100 fine ($1,600 in today’s money) and a 10-day suspension. In his six seasons with Boston, he won 89 games and recorded a 2.19 ERA.

He had a four-year stretch where he was second in the AL in wins and ERA behind Walter Johnson, and Ruth had a winning record against Johnson in head-to-head matchups. But also during the time, he fought with management and was as a headache. His continued outright refusal to adhere to the teamâ€™s curfew earned him several suspensions and his non-stop salary demands infuriated owner Frazee.

The worst baseball transaction ever!

Just after New Year’s 1920, the worst deal in Major League history would be made. The Boston Red Sox would sell Babe Ruth to the New York Yankees for $100,000. Frazee would comment that Ruth was one of the most selfish and inconsiderate men that ever wore a baseball uniform. He also said Ruth ate and drank excessively, frequented prostitutes, and had been involved in several car accidents. It would have surprised no one if, for whatever reason, Ruth was out of baseball in a year or two. It was a gamble that the Yankees were willing to take.

According to Marty Appel in his history of the Yankees, the transaction, “changed the fortunes of two high-profile franchises for decades”. The Red Sox, winners of five of the first sixteen World Series, those played between 1903 and 1919, would not win another pennant until 1946, or another World Series until 2004, a drought attributed in baseball superstition to Frazee’s sale of Ruth and sometimes dubbed the “Curse of the Bambino.”

The Yankees, on the other hand, had not won the AL championship prior to their acquisition of Ruth. They won seven AL pennants and four World Series with Ruth and led baseball with 40 pennants and 27 World Series titles in their history. Previous to the sale, the Babe would start his transition from being a pitcher to being a hitter. In 1919 he pitched in 17 games and hit in 130 games.

In 1920, Ruth led the league with 54 home runs, 158 runs, and 137 runs batted in (RBIs) for the Yankees. Ruthâ€™s arrival in New York began a stretch of offensive dominance the game will likely never see again. In the 12 seasons between 1920 and 1931, Ruth led the AL in slugging 11 times, home runs 10 times, walks nine times, on-base percentage eight times, and runs scored seven times. His batting average topped .350 eight times. In exactly half of those 12 seasons, he batted over .370. Ruthâ€™s effect on the national game was nothing short of revolutionary.

Leigh Montville, the author of “The Big Bam,” wrote that Ruthâ€™s teammates reacted with the same sense of wonder like everyone else in America. â€œThey never had seen anything like it. The game they had learned was being changed in front of their faces.

On May 25, he was thrown out trying to stretch a single into a double and, furious at the call, threw dirt in umpire George Hildebrand’s face. On his way towards the dugout, he spied a heckler and jumped into the stands, ready to fight. The fan ran away and Ruth ended up standing on the dugout roof, screaming, â€œCome on down and fight! Anyone who wants to fight, come down on the field!â€ Ruth was fined $200 and was replaced as captain by shortstop Everett Scott.

In mid-June, for his part in an obscenity-laced tirade against umpire Bill Dinneen, he was suspended for 3 games. When Ruth got the news the following day, he challenged Dinneen to a fistfight, and his suspension was increased to 5 games.

The House that Ruth Built

In 1923 in their own ballpark, directly across the Harlem River in the borough of the Bronx. Yankee Stadium was dubbed the House That Ruth Built, but with its short right-field porch, a more appropriate title might be the House Built for Ruth. Babe returned to his battering ways with a vengeance. He hit .393. The Yankees again won the World Series. Ruth won his only batting title in 1924, easily topping the AL at .378.

Between 1923 and 1925, Ruth’s hard life was starting to take its toll. He collapsed several times and was hospitalized several times. He had convulsions and had surgery. Many of his teammates intimated that his illnesses were all caused by his alcoholism. Ruth by this point had reached 260 pounds. Ruth spent part of the offseason of 1925â€“26 working out at a gym, where he got back into shape.

The 1927 Yankees are often talked about as the greatest team in baseball history. New York finished with a 110-44 record, winning the league by a whopping 19 games and sweeping the Pittsburgh Pirates in the World Series. They scored 976 runs, 131 more than second-best Detroit. But in 1927 Lou Gehrig out hit Ruth .373-.356, he led the major leagues in doubles, RBIs, and total bases and was second in the American League in triples, home runs, hits, and batting average.

In 1928, the Yankees were not quite as good. but still got the AL pennant. The Yankees swept the Cardinals that year and Ruth hit 54 home runs on the year. During this time the Yankees were known as Murderers’ Row because of the power of its lineup, In January 1929, Babeâ€™s first wife, Helen, died in a house fire in Watertown, Massachusetts. It was reported that Ruth wept uncontrollably.

Babe married Claire Hodgson on April 17. The following day, the Yankees, with numbers on the back of their uniforms for the first time, opened the season against the Red Sox. Babe, wearing his new #3, whacked a first-inning home run to left field and doffed his cap to Claire as he rounded the bases. On August 11 in Cleveland, Ruth hit the 500th home run of his career.

In 1934 due to his declining health and stats Yankee’s owner Ruppert gave Ruth a pay cut of 50%. Ruth excepted knowing his 20-year career was coming to an end. On July 13 against the Detroit Tigers, Ruth would hit his 700th home run. Ruth had always wanted to be a manager, So Yankees manager Ruppert worked out a secret deal with the Boston Braves manager Bill McKechnie to offer Ruth a contract that would include the titles of Assistant Manager and Vice President. When Ruth would present the deal to the Yankees owner, he said he wouldn’t stand Ruth’s way, so Ruppert’s trick worked.

As early as May 12, he asked Fuchs to let him retire, Ruth retired on June 2 after an argument with Fuchs. In the years after his retirement, Ruth would make appearances both paid and for charity. He would schmooze with fans and sign autographs. On September 30, 1945, baseball superstar Babe Ruth delighted 2,500 fans in Hartford Connecticut by participating in an exhibition game between two local semi-pro teams: the Savitt Gems of Hartford and the New Britain Codys.

On that morning, the Hartford Courant breathlessly announced that â€œthe greatest attraction ever known in baseball, and the home run king of all time, Babe Ruthâ€ was scheduled to appear â€œin personâ€ at Bulkeley Stadium in Hartford and â€œgive a demonstration of hitting the ball over the fenceâ€ before pinch-hitting for the Savitt Gems.

That afternoon, wearing a brand-new Gems jersey with a bright red baseball cap and matching stockings, the 51-year-old Ruth managed to hit off a handful of home runs before the game, much to the delight of everyone in attendance. His game-time performance, however, resulted in a handful of unexciting balls and strikes while at-bat. Later he would tell reporters â€œSome days the pitches look like watermelons and other days like peanuts.â€

No one would know it at the time but it would be the last time Ruth would ever wear a baseball uniform. A few months later he was diagnosed with advanced esophageal cancer in 1946 and died from the disease in 1948. A living legend took the plate for the last time in front of thousands of adoring fans that September in Connecticut history. Such was the life of George Herman “Babe” Ruth.

EmpireSportsMedia.com’s Columnist William Parlee is a member of the Society for American Baseball Research.Â  Follow me on Twitter @parleewilliam