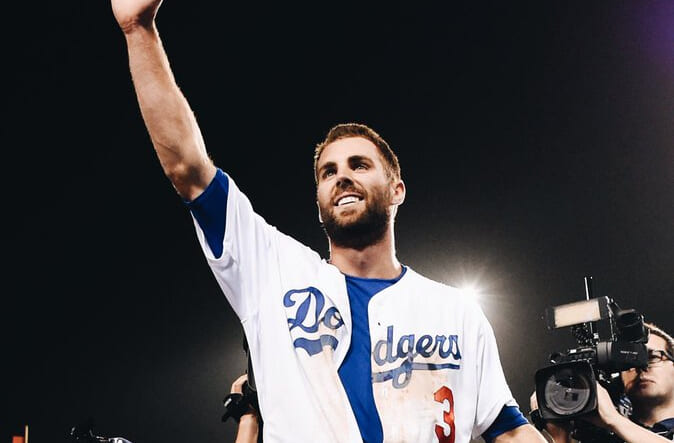 The New York Yankees season and hope for another championship were over when they lost in the wild card round to the Boston Red Sox, but the baseball season continued for four teams. The Tampa Bay Rays, who won the AL East during the regular season, lost to the Red Sox in the ALDS. The Red Sox went on to face the Houston Astros in the ALCS. The Astros lead the Red Sox 3 games to 2. The Dodgers beat the Giants for their trip to the NLCS, and the Braves won over the Brewers for their berth on the NL side. Last night was a big night for the Dodgers as they faced elimination. The Braves led the series 3-1. At the end of the night, the Dodgers were going to back Atlanta as they won the game conveniently 11-2.

Game one: Corey Knebel was on the mound for the Dodgers and Max Fried for the Braves. Both teams scored a run in the first, tying the game at one. In the second inning, both teams again scored a run tying it at two apiece, and the game remained deadlocked through the seventh inning. The top of the eighth was scoreless for the Dodgers; in the bottom, they brought in their closer Kenley Jansen to face the Braves. He did the job with a 1-2-3 inning.

In the top of the ninth inning, Will Smith took to the mound and put down the Dodgers, still tied at two. Ozzie Albies got a base hit into no man’s land in center in the bottom with Blake Treinen pitching. Albies stole second. Austin Riley singled to left, and Albies scored for a walk-off win for the Braves. The final score was Braves 3 Dodgers 2. winning pitcher was Will Smith loser Blake Treinen.

Game two: The second game had Ian Anderson facing the Dodgers Max Scherzer. With the managers being super careful, neither pitcher lasted long in this contest. Anderson went three innings, and Scherzer lasted 4.1. The Dodgers struck first in the first inning with two runs. Mookie Betts singled, and Corey Seager hit a two-run blast to right field. Those were the only two runs the Dodgers would score until the seventh inning. The Braves, for their part, scored two in the fourth. Then, in the bottom, with one on base, Joc Pederson hit a homer to right to tie the game at 2.

In the top of the seventh, the Dodgers loaded the basis. Chris Taylor came to bat and hit one short of the centerfielder giving the Dodgers the 4-2 lead in the game, silencing the crowd in Atlanta. But that would only be temporary because, in the bottom of the eighth, the Braves would answer with two runs of their own to tie up the game at 4. First, Rosario singled, Freddie Freeman flew out, Rosario tagged and just made it to second. Then, Ozzie Albies singled, scoring Rosario. Next, Austin Riley doubled driving in Albies.

At the top of the ninth, Will Smith struck out the Dodgers in order. At the bottom Brustar Graterol on the mound, Travis d’Arnaud singled, Dansby Swanson hit into a force out. Heredia ground out, moving Swanson to second. Then, Rosario faced Kenley Jansen and singled, winning it for the Braves. The final score was the Braves 5 and the Dodgers 4. The winning pitcher was Will Smith, and the loser was Brustar Graterol.

Game Three: Los Angeles hoped the confines of Dodger Stadium would be kinder to them and avoid being three games behind the Braves. Charlie Morton was on the mound for the Braves and Walker Buehler for the Dodgers. The Dodgers got on the board first with a two-run homer deep into centerfield by Corey Seager. The second and third innings remained scoreless for both teams.

In the top of the fourth inning, the Braves came alive, scoring four runs. With one on, Austin Riley doubled to the centerfield wall. Joc Pederson singled to right driving in Albies. Adam Duvall drove in Riley to tie the game at 2. Pederson was driven in as the Braves took the lead. With the bases loaded, a walk put the Braves up 4-2, and that was the game for Buehler. He was replaced by Alex Vesia, who stopped the bleeding.

In the fifth, Adam Duvall got his second RBI of the game, making it 5-2. The sixth and seventh innings were scoreless. The eight-inning was the saving grace for the Dodgers as they scored four runs giving them the six runs they would need for the win. With Luke Jackson on the mound, Cody Bellinger slammed a three-run homer to right-center, tying the game at five apiece. The Dodgers added one more run in the bottom of the eighth to put them up one run. Kenley Jansen pitched a clean top of the ninth to preserve the win for the Dodgers and give them one win against the Braves two wins in the seven-game series. The final was 6-5, the winning pitcher was Tony Gonsolin, and the loser was Luke Jackson, with the save going to Kenley Jansen.

Game Four: The Dodgers’ enthusiasm leading into game four was quelled early when the Atlanta Braves took a four-run lead early in the game. In the second, Eddie Rosario hit a solo homer to left. Then, Adam Duvall hit a back-to-back homer to center field to put the Braves up two. Next, Eddie Freeman fired a long ball to the centerfield stands in the third, tacking on another Braves run. Then Rosario tripled to right. Next, Joc Pederson singled to center with men on the corners, driving in Rosario for the Braves’ four-run lead.

In the top of the fifth, the Braves would add on another run; in the bottom. The Dodgers finally got onto the scoreboard. With two on, pinch-hitter, A.J.Pollock would drive in two runs with a single to center. But that is all the Dodgers could do against the Braves. In the ninth, the Braves scored another run, with two on; Eddie Rosario would strike again with a three-run homer to right for the convincing 9-2 Atlanta Braves win. The winning pitcher was Drew Smyly, and the loser was Julio Urias.

Game Five: Last night, with the Dodgers in the elimination hole yet again, they faced the Braves in a 5:08 PDT contest. Max Fried was on the mound for the Atlanta Braves. The Los Angeles Dodgers had Joe Kelly on the mound. Freddie Freeman put the Braves on the board first with a right down the middle no-doubter into the centerfield stands for the two-run lead for the Braves, which ended Kelly’s night with only two-thirds of an inning. That lead held until the bottom of the second when the Dodgers scored three runs. AJ Pollock hit a solo homer followed by a two-run jack by Chris Taylor. Dodgers 3 Braves 2.

The Dodgers picked up another run. With Pollock on, Chris Taylor managed a single to center, scoring Pollock for the Dodgers 4-2 lead. The fourth inning was scoreless for both teams. At the bottom of the fifth inning, the Dodgers scored another two runs. Freddie Freeman had a solo blast to center. That was followed by Chris Taylor’s second home run of the game for the 6-2 Dodgers lead. The top of the sixth inning was scoreless for Atlanta Braves. With Dylan Lee pitching for Atlanta at the bottom of the sixth, Trey Turner singled, but the Dodgers failed to score. Dodgers 6 Braves 2.

. In the Braves half of the seventh with Blake Treinen, with his second inning of work for the Dodgers, put down the Braves in order. At the bottom, Chris Taylor hit his third home run of the game, a solo shot to left. Then Cody Bellinger singled to right. Matt Beaty flew out to end the inning. but with Taylor’s third homer of the game, the Dodgers led the game 7 to 2.

Corey Knebel pitched the top of the eight for the Dodgers and struck out three in a row. At the bottom, Jacob Webb on the mound, Mookie Betts singled and stole second. Trey Turner singled, scoring Betts. Corey Seager singled, moving Turner to second. Will Smith, the only Dodger starter without a hit, struck out. AJ Pollock, who got the first homer for the Dodgers, homered again to the bleachers in left-center, scoring Turner and Seager for another three runs for the Dodgers. Dodgers 11 Braves 2.

In the top of the ninth inning, with the last licks on the line for the Atlanta Braves, Kenley Jansen took the mound for the Dodgers. Ozzie Albies flew out to left. Freddie Freeman ground out to second. Austin Riley flew out to right, and the Dodgers staved off elimination and moved on to Atlanta on Sunday. The final score was the Los Angeles Dodgers 11 and the Atlanta Braves 2. The winning pitcher was Evan Phillips, and the loser was Max Fried. The series is now three games to two in favor of the Atlanta Braves.