New York Yankees: Take-a-ways from the Phillies 3-1 win over the Yankees! 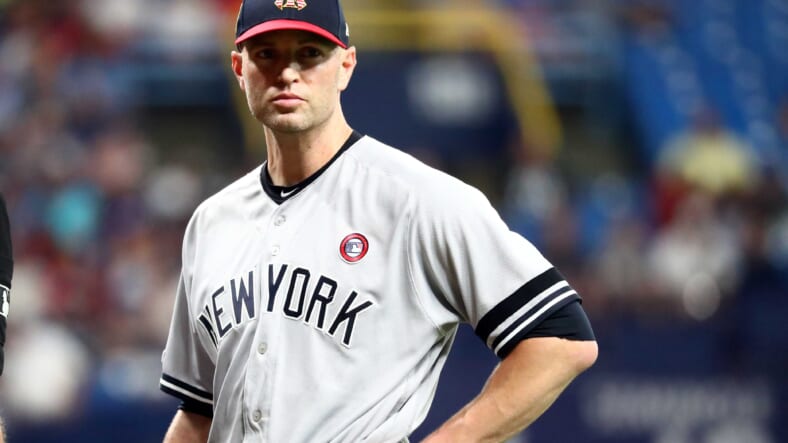 It was a beautiful day for New York Yankees baseball in Clearwater, Florida.Â  The skies were mostly cloudy, with a delightful temperature of 75.Â  The Yankees met the Philidelphia Phillies at their packed home park.Â  The Phillies started Ramon Rosso ERA 2.45 against the Yankees J.A. Happ ERA 1.00 in his fourth start of the season.Â  Happ has been excellent so far during the spring, so far in three games, he has pitched nine innings giving up just one run.

The game started with Rosso striking out leadoff Brett Gardner.Â  Rosso made quick work of the Yankees using just nine pitches.Â  Urshela struck out, and Mike Ford popped out.Â  J.A. Happ on the mound with Chris Iannetta catching for Gary Sanchez, who was recovering from a sore back.Â  Bryce Harper singled, but the Phillies left him on first as Happ used eight pitches to close out the inning.Â  In the second, Clint Frazier led off with an off the wall double. Rosell Herrera was hit by a pitch. An Erik Kratz drove Frazier in for the Yankee 1-0 lead.Â  First up for the Phillies was former Yankee Didi Gregorius, who had yet to get a hit this season.Â  He popped out, and Happ shut down the rest of the side.

The Phillies picked up a Mahtook home run in the bottom of the third to tie up at 1.Â  Harper reached on a ground-rule double that Frazier didn’t read correctly of just didn’t run for.Â  A pop-out ended the half.Â  Thomas Milone, who had three hits yesterday, hit a long triple but failed to score at the top of the fourth.Â  At the bottom, Happ, in his fourth-inning, put down the side. The Yankees got two on in the fifth but failed to score. At the bottom, Aroldis Chapman made his second appearance of the season and pitched a scoreless half.

On the sixth, the Yankee couldn’t score.Â  Michael King gave up a hit to Bryce Harper and a walk but drew a double play and got out of the inning unscathed.Â  At the Seventh, Morgan loaded the bases with Yankees, and Joe Girardi replaced him with Russ, who got the last out and left the bases loaded.Â  At the bottom of the seventh, Michael King pitched his second scoreless inning.Â  Yankees 1 Phillies 1. Russ for his second inning allowed a single and a walk but got out of it.

At the eighth, Michael King came out for the third inning of work and allowed a single followed by a long home run by Christian Bethancourt for the Phillies 3-1 lead.Â  King got two outs and was replaced by Jonathan Holder, who got the last out.Â  With last licks for the Yankees, Garrett Cleavinger came in to close it out for the Phillies, he gave up a walk to Stowers but then got a strikeout and ground out, and that was the game.Â  Final score Phillies 3 and the Yankees 1.

For the Yankees, J.A. Happ continued his excellent pitching giving up one run in four innings for an ERA of 1.33 in 13 innings of work.Â  Prospect Michael King gave up the other two runs, one a homer as he pitched 2.2 innings in the game.Â  Thomas Milone who went 3 for 3 yesterday, hit a really long triple that was first called a homer, but it bounced off the top of the wall for the three-bagger.Â  The winning pitcher was Addison Russ and the loser Michael King for the Yankees.Â  Of note, former Yankee shortstop Didi Gregorius went hitless in the game and is now 0 for 26 at the plate.Â  The Yankees spring training record is now 10-6-2.