If eliminated tonight, has Tanaka Time run out for the New York Yankees? 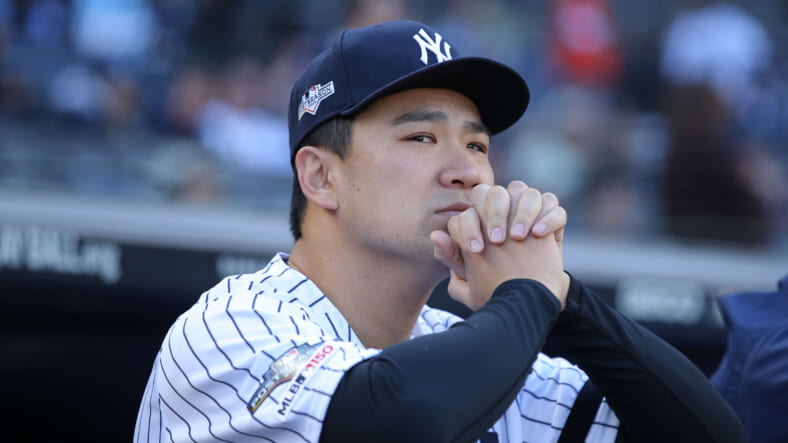 Last night, the New York Yankees were pushed to the brink of elimination by the Tampa Bay Rays. In a lopsided affair, the bombers dropped game 3 of the ALDS 8-4 which put them down two games to one in the series.

Masahiro Tanaka was on the mound for the Yankees, and for the second straight postseason start, Tanaka was smacked around. Granted, he deserves a little bit of a break on the first start due to the botch job by the MLB on the start of the Indians game.

However, it still doesn’t change the numbers. In two starts this postseason, Tanaka has been horrific for the Yankees. In the final year of his seven year deal, Tanaka has pitched eight innings while giving up 11 earned runs. Good enough for a 12.38 ERA.

Dating back to last year against the Astros, Tanaka is now 0-2 with a 10.38 ERA in his last three starts. Of course, that has left a bad taste in the mouth of Yankees fans. Now to Tanaka’s credit, his postseason ERA as a whole is still just 3.33 with the Yankees despite the terrible performances of late.

As stated, Tanaka will enter free agency this offseason after completing his seventh year with the Yankees. Tanaka has become a fan favorite. However, there are serious questions around whether the Yankees should bring back Tanaka once the year concludes.

What should the Yankees do?

This is such a tough question because I love Masahiro Tanaka. I’ve been a big fan and despite the ups and downs, he’s been very solid for the New York Yankees. He’s 78-46 with a 3.74 ERA in the regular season while pitching to that 3.33 ERA with the Yankees in the postseason.

Tanaka has also dealt with some injuries during his time with the Yankees. Tanaka will be turning 32 years old on November 1st. So what should the Yankees do? Should they bring back Tanaka or let him walk once the year is over.

If you’re asking me, I would suggest letting him walk. Tanaka has given the Yankees everything he’s had. However, it might be time to move in a new direction. The Yankees have young starters coming up and they’ll get Luis Severino and Domingo German back next year.

If it was up to me, I would personally let all three of the free agent starters walk after the year is over. If the postseason has taught us anything, it’s that teams need multiple aces to get it done in October, and I just don’t know if Tanaka can be that reliable guy behind Gerrit Cole moving forward.

With the money coming off the books, I think the Yankees should do whatever they can to go out and sign Reds starting pitcher Trevor Bauer. Yes, there’s been friction with him and Gerrit Cole, but that’s the guy the Yankees need.

Bauer is going to be a finalist for the NL Cy Young, and he would be the perfect co-ace with Cole. The Yankees made a big first step in signing Cole last year, but if eliminated, it’s clearly not been enough. I love Masahiro Tanaka, but the Yankees need someone a level above moving forward.

Kinda looks like the @yankees could use some more starting pitching. Interesting.