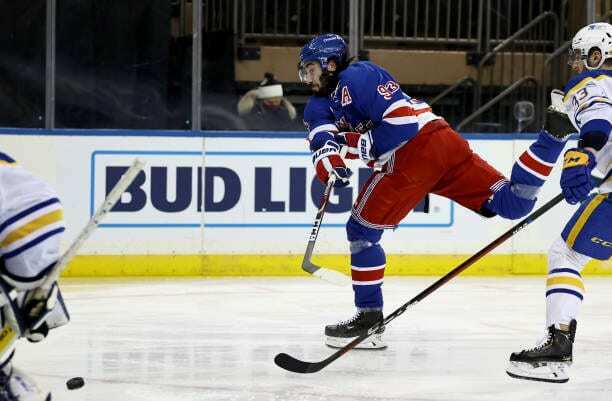 NEW YORK, NEW YORK - APRIL 25: Mika Zibanejad #93 of the New York Rangers scores a hat trick with this shot in the second period against the Buffalo Sabres at Madison Square Garden on April 25, 2021 in New York City. (Photo by Elsa/Getty Images)

The Rangers are now only four points behind the Boston Bruins for the last spot in the playoffs. However, the Bruins have also played two fewer games.

Zibanejad is the only player so far in the NHL who has recorded three hat tricks this season. The Rangers are also the only team in the NHL who has recorded six hat tricks in a season. Chris Kreider and Pavel Buchnevich have added the other ones. He completed the hat trick at 2:05 of the second period, giving the Rangers a 4-1 lead with a shot through the legs of Buffalo goalie Dustin Tokarski.

Kakko scored his first goal with a one-timer from the right circle off a diagonal pass by Fox from the top of the left circle at 12:02 of the first period. His second tally came on a power-play goal to make it 5-2 at 7:06 of the third period. Zac Jones had an assist for his first NHL point.

Kevin Rooney added a shorthanded empty-net goal at 19:05 of the third period for the 6-3 final.

Zibanejad was more focused on what his team accomplished instead of what he did during his post-game interview. “I thought we did what we had to do today. They (Buffalo) made it hard on us.” He also credited his teammate’s passing for most of what he accomplished in the game.

Head coach David Quinn discussed the keys to his team’s success during his post-game Zoom conference. “We need to keep playing meaningful hockey until someone tells us that these games are no longer meaningful. But we need to learn how to manage a hockey game and understanding the score. We have guys that are offensively driven but we are better when we don’t have to force offense. When we find that balance, we are a dangerous team.”

The Rangers and the Sabers will square off again at MSG on Tuesday night with a 7 p.m. puck drop.