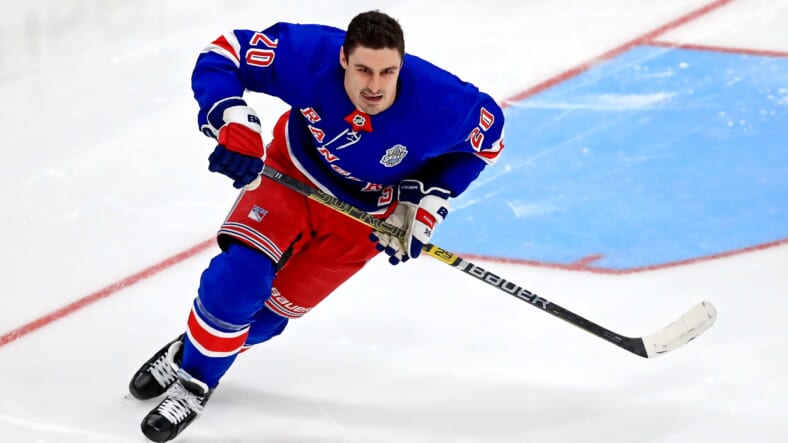 Most people would understand why the New York Rangers would trade unrestricted free agents like Chris Kreider and Jesper Fast. After all, if you don’t trade these guys, they could sign elsewhere in the offseason, and you would get nothing.Â  However, many have wondered why the Rangers would trade their restricted free agents like Tony DeAngelo and Ryan Strome since you get something for them if they leave. True, but that becomes the issue. Is that something you get in return better than what you are giving up?

What exactly is Restricted Free Agency?

When a player signs an offer sheet with a new team, his current team is notified. That team has the right to “match” the offer sheet with an identical contract and keep the player. If they don’t, they are free to sign with the team that made the offer. There is compensation for an NHL team that loses a restricted free agent. The team that declines the offer sheet and loses the player receives draft picks from the playerâ€™s new team. There are some other restrictions and such, but that is basically the nuts and bolts of RFA. The decision for the Rangers comes down to do we keep the players, take the draft pick, or take the player we can get in a trade.

What will the New York Rangers do with Tony DeAngelo

The toughest part of this decision is how well DeAngelo has grown throughout the years and how well he is playing this season.Â  DeAngelo has been even more aggressive offensively this season than in previous years and has shown a knack for getting shots through traffic and on the net. He already has 12 goals, 25 assists, and is a plus-five this season.Â  It was just a couple of seasons ago that it was difficult for many to imagine DeAngelo ever becoming a top-four defenseman. He has now become a force on the blueline, which makes it tough to trade him. So why do you even think about trading him? Ah, that pesky salary cap issue. Jump back to the beginning of the year when the Rangers could not accommodate him for more than a one-year, $925,000 deal. His good year means that he could demand more in a new contract, and that might not be cap-friendly enough for the Blueshirts.

….. and the same goes for Ryan Strome

Experts have stated that Ryan Strome could ask for five to six million dollars per year in his next contract. Is that something that the Rangers can or want to take on? Again the issue is that Strome has played well this year. He has made a steady improvement from the beginning of the 2018-19 season when he played poorly. Previously Strome has never had more than 50 points before but is on pace for more than 70 this season.Â  The Rangers brass now has a little less than a month left to sort all of this out.