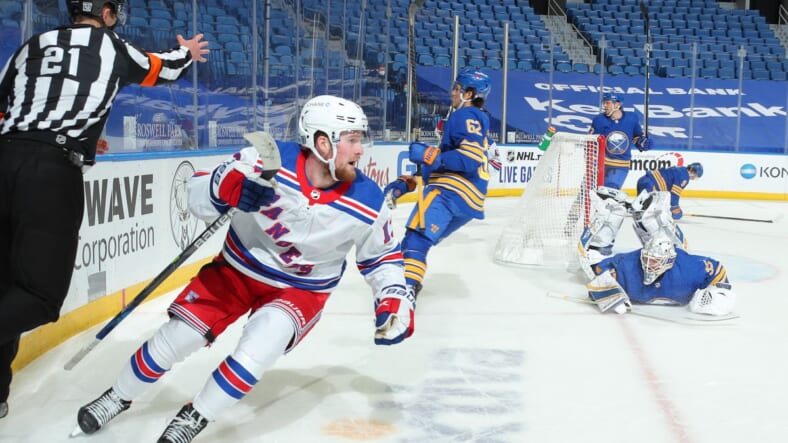 Even after scoring his second goal on Saturday, New York Ranger’s rookie Alexis Lafreniere still sits way down the list of NHL rookies in scoring. Going into Sunday, Lafreniere was tied for 36th among all rookies, somewhat unexpected for the overall number one draft pick. While COVID-19 and the effects that it has had on the NHL season, there are a couple of other factors why other rookies have gotten off to better starts.

Sitting atop of the rookie point leaders is the Minnesota Wild forward Kirill Kaprizov. The first stat to note about Kaprizov is that he is 23 years old. So in addition to being able to legally buy a drink in the states, Kaprizov has aÂ  higher level of experience than Lafreniere.

Kaprizov has been playing regularly in the KHL since the 2016-17 season. During his final season with CSKA Moscow in 2019â€“20, Kaprizov set career highs marks with 33 goals, 29 assists, and 62 points. He tied his career-best in games played with 57. His 33 goals led the KHL for the second straight season and his 62 points ranked third in scoring.

At the 2018 Winter Olympics in Pyeongchang, South Korea, Kaprizov was the youngest player on the Russian team He scored the game-winning goal in overtime that won the Russians. the Gold Medal.

With all due respect to Canada and their junior leagues, the QMJHL is not the KHL. Kaprizov has been playing in a league for a few years that is just a notch below the NHL. Time will tell whether Lafreniere produces at the same level as others but will need some playing time in the NHL to make up for the lack of experience.

The Chicago Blackhawks Pius Suter sits just a point behind Kaprizov in rookie points. Like Kaprizov, the 24-year-old Suter has had the advantage of playing pro hockey for a few years in the Swiss League. In fact, Suter finished the 2019â€“20 season as the league’s top scorer with 53 points, including 30 goals, in 50 regular-season games. He was also named MVP of the regular season.

Suter also had the advantage of playing some hockey in the fall whether many other players did not. After signing with the Blackhawks last summer, Suter remained in Switzerland and was loaned by the Blackhawks to return to ZSC Lions’ affiliate, the GCK Lions.Â  Then in early November, with the NHL future still uncertain, Suter officially returned to the ZSC Lions. After making six appearances with the Lions, Suter was recalled from loan by the Blackhawks in late December to joining the team for training camp.

Many have stated that Lafreniere should have played for Team Canada in the most recent World Juniors Championships. However, it was the same Blackhawks who lost their top prospect for most of the season with a wrist injury in that same tournament.

Maybe the best thing to remember is that Lafreniere is only 19-years-old. So really all that has happened here was that due to COVID-19, others were given a big head start for a race and a career that is a marathon, and not a sprint.