Who will the New York Rangers start in goal on Tuesday night? 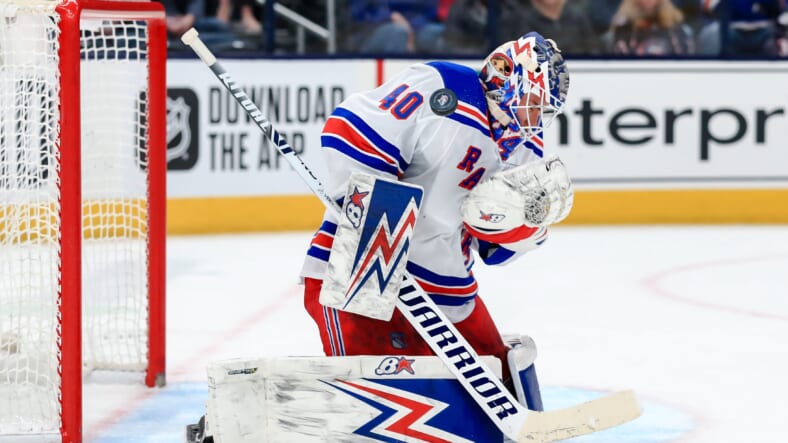 The New York Rangers have a bit of a quandary for Tuesday night’s matchup against the Pittsburgh Penguins. After Alexandar Georgiev was pulled in Sunday night’s loss, many will wonder if head coach David Quinn will give the young Russian another chance. However, the decision is not quite that easy considering that Kieih Kinkaid played very well in relief. He did give up two goals on odd-man rushes but otherwise was quite solid in net.

After Sunday night’s game, Quinn said that it has not given any thought on who would start in net on Tuesday night. As the Rangers did not practice on Monday, we have no idea who will start. If Igor Shesterkin is healthy, he would probably get the nod. But we may not know what is going on until the morning skate at the earliest. Even though Shesterkin’s groin pull was listed as minor, it would still appear that playing Tuesday night might be rushing things too quickly. So the decision may come down to Georgiev vs. Kinkaid.

Why the New York Rangers would start Keith Kinkaid

The biggest reason would be that he played well on Sunday night, even though he had not seen NHL action since Â Nov. 30, 2019, as a member of the Montreal Canadiens.

Teammate Jacob Trouba had some good things to say about Kinkaid’s game during his post-game Zoon conference. â€œEspecially me over the last two weeks, I got to see him a lot in practice and how heâ€™s working and staying sharp,â€ Trouba said. â€œHe got a chance to get in there, and he made some big saves for us and definitely kept us in that game as long as he could. He made some huge saves and itâ€™s good to see out of him, seeing how hard he works and knowing the kind of guy he is. Itâ€™s positive for everyone to see.â€

Quinn knows about Kinkaid from their college days when Kinkaid was the goaltender for Union College. The Rangers signed him for two years the last offseason.Â  While having an extra goalie during COVID-19 was needed, they wanted to have a qualifying goalie under contract to expose in the Seattle expansion draft. This way, they could keep both Shesterkin and Georgiev.

Even despite the three goals in 61 seconds against Pittsburgh, Georgiev was a little shaky against the Devils on Saturday afternoon. MSG analyst Steve Valiquette made a very solid point during the telecast. He pointed out that on P.K Subban’s slapshot goal from the blue line, this was a shot the Georgiev usually stops. Valiquette stated that Georgiev, when he has a clear view, had not allowed a goal on 257 shots from that distance in the last three years.

Why Georgiev will start for the New York Rangers

From a confidence standpoint, Quinn may want to start Georgiev so that the young netminder does not lose confidence in himself. At this point, everyone knows what Georgiev is capable of doing in goal. Putting him right back in there would signal that the Rangers have confidence in his abilities.

It should also be noted that Georgiev is not solely responsible for these goals. In the second New Jersey goal that temporarily tied the game, Adam Fox got caught up ice on a turnover, and Filip Chytil was beaten to the net.

The second of the three Penguin goals happened in part because K’Andre Miller fell at the blue line. On the third goal, Sidney Crosby split two defenders and beat Georgiev. Crosby has beat many of a goaltender during his time in the NHL.

So the Rangers have a bit of a small goalie controversy going into Tuesday night’s game. It will be interesting to see who the Rangers decide on to be their goalie when the puck drops at 6 p.m.