Vitali Kravtsov to re-join the New York Rangers for camp 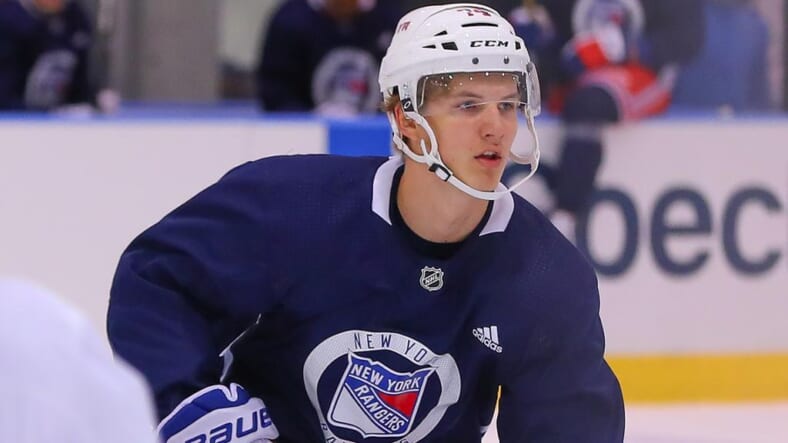 New York Rangers president John Davidson confirmed Tuesday that Vitali Kravtsov will be back with the team after being loaned to the KHL mid-season and returning to Harford in December. The 2018 first-round pick will be a part of the team’s training camp next month and compete once again for a role with the team.

â€œI think with Kravtsov, heâ€™s going to come to our camp and weâ€™ll see how it goes,” Davidson said. “Weâ€™re going to need some depth and skill as we march along here.â€

“I think with Kravtsov, he’s going to come to our camp and we’ll see how it goes. We’re going to need some depth and skill as we march along here.” – JD pic.twitter.com/uLK4KJUlcg

In June of 2018, Kravtsov was drafted ninth overall by the New York Rangers in the 2018 NHL Entry Draft. He signed with the Blueshirts the following year on April 15, 2019.

Kravtsov made his debut with Hartford in the AHL to start the 2019-20 season. Registering 1 assist in 5 games, Kravtsov opted to continue his development back in Russia, securing a loan for the remainder of the season with former club, Traktor Chelyabinsk of the KHL. He rejoined the Wolf Pack in December of 2019 and ended with six goals and 15 points in 39 games with the team. He had two goals and three points in 11 games with Chelyabinsk Traktor.

The first thing that will indicate if he can help is to check how his psyche is after a frustrating season. Kravtsov sulked when he didnâ€™t make the team in training camp, then left Hartford to return to Russia before coming back. His game did get better late in the season, and even if the Rangers don’t use him ahead of other forwards, it certainly would be good for his development if he came to camp to be around the coaches and teammates to see if he can regain confidence in the skills that the Rangers saw in him when they selected him ninth overall in 2018.

Kravtsov is no stranger to playoff-type hockey.Â  He represented Russia at the 2019 World Junior Championships and ended the tournament with 6 points in 7 games, helping Russia claim the bronze medal against the Swiss national team. Also, during the 2018 KHL playoffs, Kravtsov broke the KHL record for most points by an 18-year-old in the postseason.

The Rangers hope that Kravtsov could be part of expanded rosters when they take on the Carolina Hurricanes in the first round of the NHL playoffs in July.