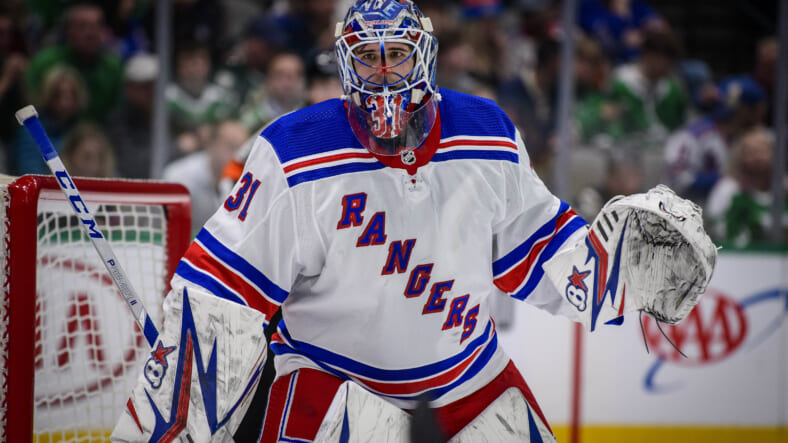 After practice on Friday, New York Ranger’s head coach David Quinn confirmed that goaltender Igor Shesterkin will miss at least Saturday’s game at New Jersey. Shesterkin suffered the lower-body injury late in the third period of the Ranger’s 6-1 victory over New Jersey. Shesterkin seemed to hurt his right leg with just under six minutes to play when he stretched to stop a 2-on-1 break and shot by Damon Severson. He went down without contact and had to be helped off the ice, dragging the leg.

Shesterkin did not practice on Friday. Alexandar Georgiev and Kieth Kinkaid were in the net for the practice session. Quinn did confirm that Georgiev will start against the Devils on Saturday afternoon while stating that they have yet to get feedback on Shesterkin’s injury.

Later on Friday, the Rangers updated his status and reported that Shesterkin is day-to-day with a mild groin strain.

Quinn also shared after practice that Kaapo Kakko will play for the first time after being placed on the NHL’s COVID-19 List.

Per #NYR Coach Quinn, Kaapo Kakko will return to the lineup tomorrow vs. NJD.

The New York Rangers expected to elevate Kinkaid from the taxi squad.

For this season, due to the pandemic, the NHL created taxi squads consisting of between 4-6 players per team, including a minimum of one goalie. The players will practice and travel and be available in case a team needs to recall a player on short notice.

Mollie Walker of the New York Post reported through the Rangers PR department that Kinkaid will backup Georgiev on Saturday.

Kinkaid, the veteran NHL goalie was signed by the Rangers for just such a purpose. He signed as a free agent to a two-year, $1.65 million contract with the New York Rangers on October 9, 2020.

The Long Island native signed an entry-level contract with the New Jersey Devils in April 2011 after his sophomore season with Union College.

After time in the Devils and Columbus Blue Jacket’s organization, Kinkaid spent last season as a member of the Montreal Canadiens organization. He played six games for the Canadiens, posting a .875 save percentage. Kinkaid was placed on waivers on December 2, 2019. After going unclaimed off waivers, he was assigned to the Canadiensâ€™ AHL affiliate, Laval Rocket. In his first return to the AHL since the 2014â€“15 season, Kinkaid collected just 3 wins in 13 games with the Rocket. On February 29, 2020, Kinkaid was re-assigned on loan by the Canadiens to the Charlotte Checkers of the AHL, the primary affiliate of the Carolina Hurricanes.