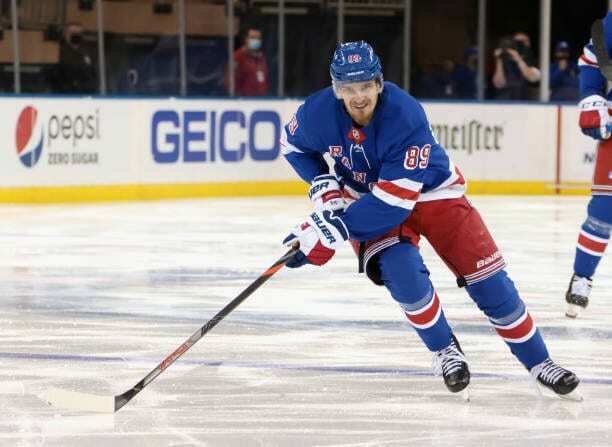 After dominating the New Jersey Devils for almost two and a half games, the New York Rangers almost lost a four-goal lead on Saturday afternoon. Pavel Buchnevich had his first career hat trick and the Rangers held off a Devil’s rally to win by the score of 6-3.

Buchnevich is the first player in franchise history to score a hat trick on his birthday. He is the 14th
NHL player with a birthday hat trick and only Wayne Gretzky did it twice.

After scoring the first four goals of the game, the Devils rallied back with three goals to narrow the margin. The Rangers then added two empty-net goals to seal the victory.

Igor Shesterkin finally gave up a goal to the Devils after going over 199 minutes of holding them scoreless.

Per the NHL Public Relations, Shesterkin has established a Ranger franchise record for the longest shutout streak against one opponent. He broke the record held by Dave Kerr, who went 198:07 against the Montreal Canadiens during the 1939-40 season.

In his post-game Zoom conference, Mika Zibanejad addressed the issues that led to the Devils almost coming back from a four-goal deficit. “We stopped playing a little bit. We just made it way too easy for them. They were good enough to take advantage of their chances. That obviously was not good but I like how we stuck it out and got the win.”

“They were winning way too many one-on-one battles,” head coach David Quinn said in his post-game conference. It really was a reflection of where we were mentally. Once we got up 4-0 we disrespected the game and our opponent.Â I wasn’t surprised by the pushback we got from New Jersey. We got outplayed in the second half of that game and we have a very, very difficult game tomorrow.”

The two teams will for the final game of their four-game series on Sunday afternoon in New Jersey.