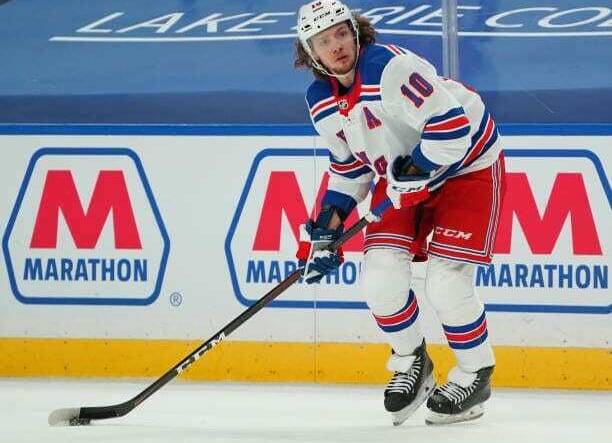 BUFFALO, NY - JANUARY 26: Artemi Panarin #10 of the New York Rangers during the game against the Buffalo Sabres at KeyBank Center on January 26 , 2021 in Buffalo, New York. (Photo by Kevin Hoffman/Getty Images)

The New York Rangers once again gave up a late third-period goal against the worst team in the NHL. This time it cost them a point in the standings as they lose in a shootout to the Buffalo Sabres by the score of 3-2.

Artemi Panarin scored goals in the first and second periods to lead the Blueshirts scoring effort.

Adam Fox assisted on Panarin’s second goal. His 29 assists this season are tied for the most among NHL defensemen, tied with Victor Hedman.

This game also marked the debut of Vitali Kravtsov, who joined the Rangers after a very nice season in the KHL. With the addition of Kravtsov, the Rangers played four Russian-born players in tonightâ€™s game (Panarin, Pavel Buchnevich, Igor Shesterkin, and Kravtsov). According to the NHL public relations department, this will be tied for the most Russian-born players to appear in the same game in Rangers franchise history.

Kravtsov finished the game with 10:45 TOI and three shots, including one diving attempt that almost won the game for the Blueshirts.

In his post-game Zoom conference, Panarin talked about how his young Russian teammate fared in his first game. “He started a little nervous at the beginning,” Panarin said. ” He played not to make a mistake but also played for the team. Had a really good chance at the end, and we’re really happy to have [him].”

Even in the loss, head coach David Quinn was still impressed with Kravtsov’s debut. In his post-game Zoom comments, Quinn said: “He played well. I thought he was engaged, I thought he played at a good pace and I actually liked that line (he played with Alexis Lafreniere and Filip Chytil), for the most part.”

The Rangers return home on Tuesday night to take on the Pittsburgh Penguins.