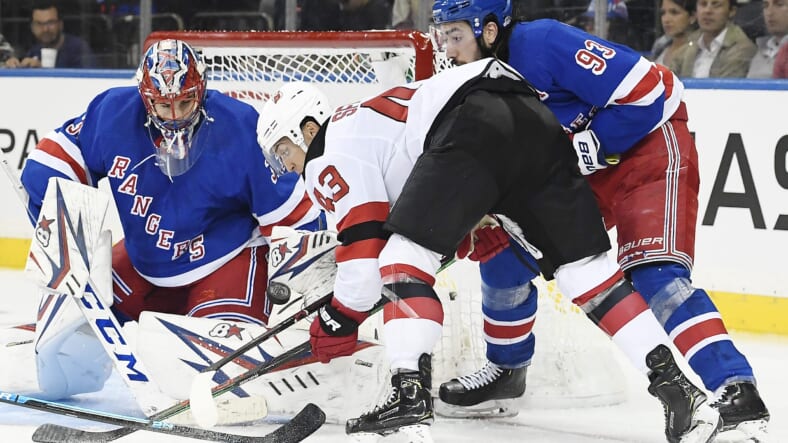 It may have easy for New York Ranger fans to look at the schedule and see a potential breather game on Tuesday night against their rivals, the New Jersey Devils. After all, the Devils finished last in the Metropolitan Division last season, 11 points behind the Rangers when the season came to a grinding halt last March due to the coronavirus.

However,Â  the Devils are off to a strong 1-0-1 start, with the even more impressive fact that the points came against last seasonâ€™s Presidentsâ€™ Trophy winners, the Boston Bruins. To add a little bit to the Tuesday night drama is that the Devil’s new head coach is former Ranger assistant Lindy Ruff.

The Rangers defense will have to deal with the Devils’ first line that has been excellent during the first two games of the season. This line features Jack Hughes, who was drafted first overall by the Devils in the 2019 NHL Entry Draft. With the Rangers drafting Alexis Lafreniere first overall, this will feature a matchup of the last two overall top selections.

Hughes struggled last season but already has 3 assists on the season. Hughes has shown some nice chemistry on the young season with linemates Kyle Palmieri and Yegor Sharangovich. Even with the shortened training camp, Sharongovich has had some nice chemistry with his linemates after just coming over from his KHL team.

This will provide a challenge to the Ranger’s goaltender Alexandar Georgiev, who was named the starter for the game after Monday’s practice by head coach David Quinn. Igor Shesterkin started that opener but looked shaky. Georgiev started on Saturday night and shut out the Islanders.

Part of this goes with David Quinn’s philosophy of sticking with what worked, including the apparent benching of defenseman Tony DeAngelo.Â  Quinn told lohud.com beat writer Vince Mercogliano that doing this was “Much more about sticking with what worked. The discipline piece is done and over with. You win 5-0 and play the way we did, you want to build off that.”

The Devils also have an outstanding goalie of their own in Mackenzie Blackwood, who would get noticed a lot more if the Devils were a better team. In fact, Blackwood may have been the primary reason why the Devils were so successful against the Bruins.

In those first two games, Blackwood has stopped 52 of 52 shots at even strength. With an early .954 save percentage, the Blueshirts will need to find a way to slip the puck past him.

The game on Tuesday will also see the Rangers celebrate and honor the commitment, sacrifice, and contributions of frontline workers across the Tri-State area. The Rangers will also wear custom warm-up jerseys to be auctioned after the game at auctions.nhl.com, and an exclusive patch, inspired by Northwell Health’s first responders, will also be available for purchase. Proceeds of both will benefit Northwell Health Foundation.