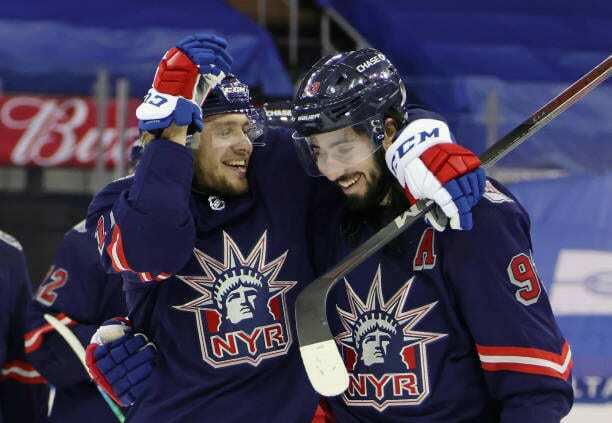 Artemi Panarin scored two goals and added an assist to lead the New York Rangers to a 4-0 victory over the New Jersey Devils. The Blueshirts started the game hot as they scored three of their goals in the first period.

Igor Shesterkin shut out the Devils for the second game in a row, stopping all 16 shots. This was the first time that a Ranger goaltender has shut out a team in two consecutive games since it was last done in 1955.

Ranger nation was a little worried when the team announced that Panarin missed the morning skate due to maintenance. However, head coach David Quinn confirmed that he would be playing on Thursday night.

Quinn seemed very prophetic about Panarin’s performance as he discussed his star player in his pre-game Zoom conference.Â  “Artemi is a special player. There are not a lot of players in this league that can do what he does.â€

Panarin scored the third and fourth goals for the Rangers. Jacob Trouba started the scoring for the Rangers and Ryan Lindgren tallied his first goal of the season for the first two Ranger tallies. Panarin has posted seven different three-point games at MSG this season. He is the first Ranger to post at least seven three-point games at home in the same season since Jaromir Jagr in 2006-07.

Colin Blackwell continues to do well with his promotion to Panarin’s line, adding three assists for the Rangers. Blackwell has established single-game career-highs with three assists and three points. Blackwell and Panarin were on the ice for each of the Ranger’s four goals.

The New York Rangers defensive unit has been excellent in all aspects.

In addition to Shesterkin’s fine play, the Rangers defense played well in front of him. The Blueshirts only allowed the Devils three shots in the first period and four shots in the third. TheÂ  Rangers were also credited for blocking 20 shots in the game.

The unit has not only been solid in their defensive end, but they have also contributed on the offensive end as well. Five different defensemen have tallied a goal over the last four games (K’Andre Miller, Libor Hajek, Brendan Smith, Trouba, and Lindgren), and each of the six NYR defensemen (Adam Fox, Miller, Hajek, Smith, Trouba, and Lindgren) have recorded a goal over the last six games.

Leading this offensive output has been Fox, who recorded his 35th assist of the season, establishing a career-high. He is the first Ranger defenseman 23 years old or younger to tally at least 35 assists in a season since Sergei Zubov in 1993-94.

The two teams meet again in a Saturday afternoon matinee at MSG.