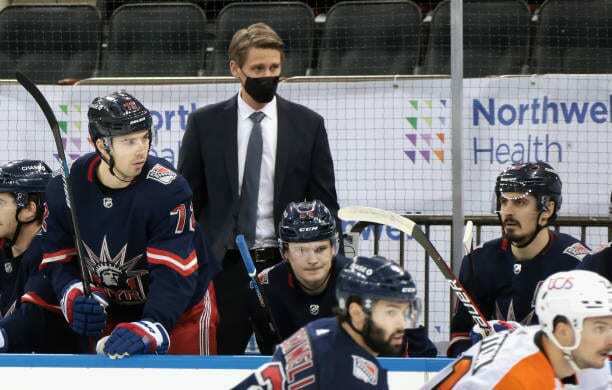 Many inside and outside of the New York Metro area have listed available coaches such as Gerald Gallant, Rick Tocchet, and former Rangers head coach John Tortorella as likely candidates to fill the open head coach position.

While new GM Chris Drury is likely to hire one of these experienced coaches, he may want to look at the success of the Tampa Lightning. Yes, the team that hired a coach with no NHL experience is now the longest-tenured coach in the league. And the defending Stanley Cup Champion to boot.

On March 25, 2013, Jon Cooper was hired to be Tampa Bay’s head coach after they fired Guy Boucher. Cooper was promoted to the position after having success with the Lightning’s AHL affiliates.

In 2010, Cooper was hired by the Tampa Bay Lightning to coach the Norfolk Admirals, the AHL affiliate. During the 2011â€“12 season, the Admirals won the Calder Cup as the AHL’s champions. For the 2012â€“13 season, Cooper became the head coach of the Syracuse Crunch after the Lightning changed their AHL affiliation. In 65 games with the Crunch, Cooper led the team to a 39â€“18â€“3â€“5 record, the best in the AHL at the time of his promotion.

The New York Rangers should give serious consideration to Kris Knoblauch.

Knoblauch is, of course, the head coach of the Blueshirts affiliate in Hartford. He also did an excellent job of temporarily replacing Quinn when the entire coaching staff was placed in COVID protocols. Knoblauch went 4-2 behind the Ranger’s bench, and the team appeared very comfortable with his leadership.

While Knoblauch does not have Cooper’s pedigree as far as winning AHL championships, he has had similar success in his coaching career.

During his four full seasons with the OHL’s Erie Otters, his team had a 204â€“58â€“7â€“3 record and won at least 50 games each season. They were the first team in Canadian Hockey League history to post four consecutive 50-win seasons. Erie won the OHL Championship in the 2016â€“17 season under Knoblauch. He was the recipient of the Matt Leyden Trophy in 2015â€“16, given to the OHL Coach of the Year.

Knoblauch also has experience with good NHL talent in his previous experiences. During his seven total seasons as head coach of the Kootenay Ice (WHL) and the Erie Otters, Knoblauch compiled a record of 298â€“130â€“16â€“13. He also coached such players as Connor McDavid, Alex DeBrincat, Andre Burakovsky during these seasons. He is not a stranger to helping the development of good, young NHL talent.

In fact, Knoblauch does have one thing on his resume that Jon Cooper did not.

Knoblauch was a Philadelphia Flyers assistant coach for two seasons before being hired to coach Hartford in July of 2019.

It might be time that the NHL and the Rangers save recycling for their waste products and look to find a coach that has the skills to continue the development of their talent for an extended period of time.