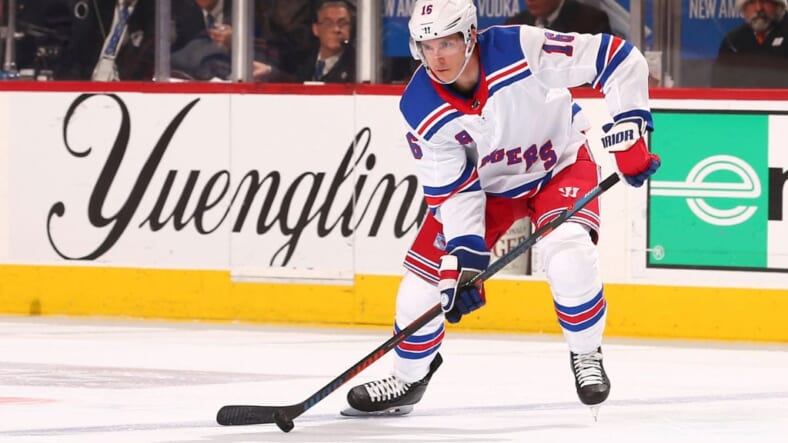 PHILADELPHIA, PA - DECEMBER 23: Ryan Strome #16 of the New York Rangers controls the puck against the Philadelphia Flyers at the Wells Fargo Center on December 23, 2019 in Philadelphia, Pennsylvania. (Photo by Mitchell Leff/Getty Images)

Alexandar Georgiev stopped 24 shots and also picked up an assist on Fox‘s coast-to-coast power-play goal. It was his fourth career NHL assist.

Julien Gauthier had two assists, posting a multi-assist game, and a multi-point game for the first time in his NHL career.

Head coach David Quinn praised his young players during his post-game Zoom conference. “Look how quickly they have adapted,” Quinn said. “I give these kids a lot of credit, it is not easy to develop in the National Hockey League. This isn’t a league where you develop. It’s a dramatic change in their hockey life.”

Chytil had a goal and an assist, playing in only his ninth game this season after suffering an injury. After the game, he talked about returning to play after not playing in five weeks in his post-game Zoom conference. “Today it felt like a good game from my side, but it could have been better. Of course, I am playing wing now instead of center, but I am happy for the two points for the team.”

Quinn also talked about the return of Chytil to the team. “There was certainly more flashes of his speed, the things he can do for us offensively, pushing people back and generate offense. He is still finding his way with the injury he had.”

Hockey Day in America takes place this Sunday, March 7 with a quadruple-header on NBC and NBCSN. The Rangers will travel to Pittsburgh to take on the Penguins in the finale of the four games, with a puck drop at 7:30 p.m.