The New York Rangers’ Doghouse is Open For Business 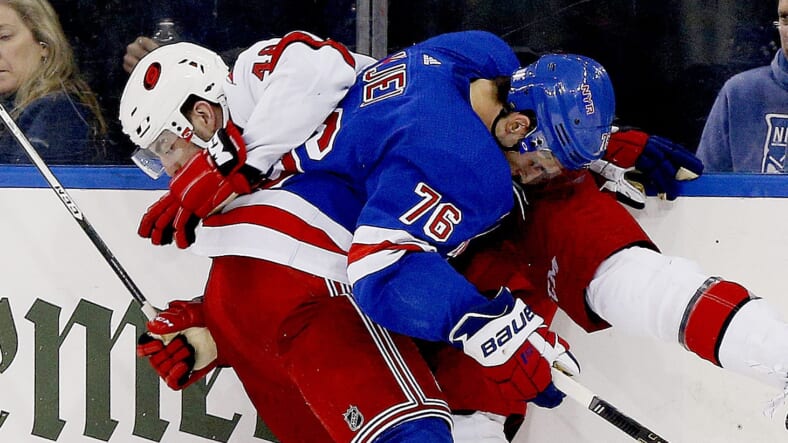 New York Rangers head coach David Quinn might be beginning to show his frustration with the slow start to games the team has experienced in their last two contests.Â  People had noticed that during Thursday night’s game against Calgary that a couple of players did not see ice time for most of the third period. Hence being placed in Quinn’s doghouse, which is surprisingly defined in the Cambridge Dictionary as “a situation in which someone is angry at you for something you did or did not do.” The two most recent notables to experience this were Brady Skjei and Kaapo Kakko.

Skjei continues to struggle for the New York Rangers

Social media blew up when the television cameras caught David Quinn leaning over to assistant coach Lindy Ruff and appeared to tell him something to the effect that Skjei does not get any more ice time. Skjei continues to be plagued by turnovers, including a key one in which he tried to clear a puck, and it went right to the Flames’ Dillon Dube, who promptly found Derek Ryan, who scored the goal that made the game 3-2. The benching came in the last 10 minutes of the third period when Skjei was tagged what could have been described as a questionable penalty call. However, it was one of a handful of crucial penalties the Blueshirts took as they were trying to tie up the game.

Kakko’s Benching a Bit of a Surprise

Kakko had already picked up a goal and assist in the Calgary game, but the 18-year-old was whistled for holding at 12:08 of the final period and was benched. After serving the penalty, he did not see the ice for the remainder of the game. Puzzling more was that the line of Brett Howden, Filip Chytil, and Kakko dominated shift after shift for most of the contest. Now, we may also consider that something else was wrong with Kakko that Quinn did not share. It has been well documented that the youngster deals with type 1 diabetes and celiac disease, and perhaps his playing time was influenced by this.

David Quinn is never one that has backed off from the tough love approach of trying to bring along younger players. Let’s hope that this approach will help more than it hurts their development.