The New York Rangers Can Still Get the Number One Pick in the NHL Draft? 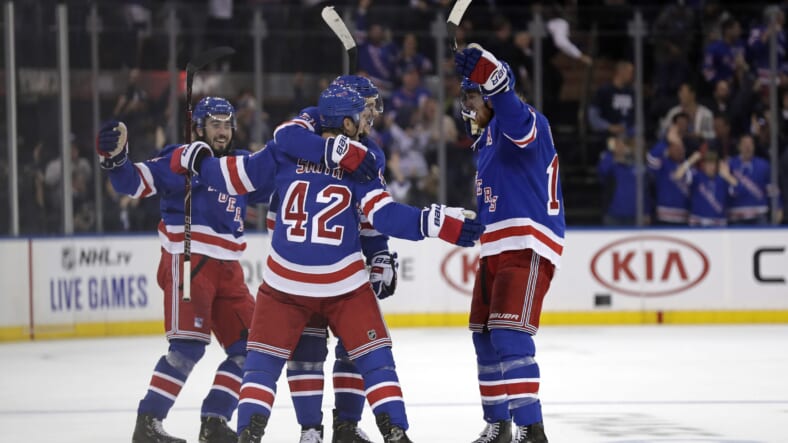 In what continues to be a puzzling year in the world and the NHL, the New York Rangers still have a chance to land the first pick in the upcoming NHL draft. How could that happen? How could a team who was selected for the playoffs, still end up with the number one pick if they are not trading for it?

It’s complicated, but here is how it happened:

The NHL draft lottery happened Friday.Â  At that event, one of eight placeholder spots beat the odds to secure the No. 1 pick, meaning a second draw is now required later this summer following the qualifying round and before the usual 16-team playoffs.

And the winner is…

One of the qualifying teams in the Stanley Cup playoffs. One of the 8 teams that lose in the @NHL's play-in round will select first overall in the 2020 #NHLDraft. #NHLonSN pic.twitter.com/uc3RQI9Wis

The placeholders, who represented the eight clubs that will eventually lose out in the NHLâ€™s qualifying round, had a combined 24.5 percent chance of selecting first. The yet unknown placeholder team that actually won the lottery, designated as Team E, had a 2.5 percent chance, making the biggest jump in history for the top pick from the No. 12. So this means that the New York Rangers will have to lose their first-round matchup against the Carolina Hurricanes, then win a one in eight chance with the remaining eliminated teams to get the first pick, which should likely be Quebec native Alex Lafreniere.

A 12.5% chance to get the first pick and take the uber-talented Lafreniere might be an interesting consolation prize if a team is eliminated in the first round. It also might lead to a very interesting scenario if a top team like the Penguins or another team like Edmonton who already has one of the top talents in Connor McDavid playing alongside the young Canadian sensation. Image him playing alongside Kane and Toews in Chicago.

Then, of course, he could be added to the already young and talented Blueshirt group playing their home games in Madison Square Garden.

Who is Alex Lafreniere?

There has not been a lot of talk about Lafreniere in Rangers nation because it was not expected the Rangers would be anywhere near the number selection. That was thought to go to someone like the Detroit Red Wings, who not only did not get the number one picked, they ended up with the fourth pick.

The 18-year-old is by far the consensus number one player in this year’s draft, ranked so by HOCKEYPROSPECT.COM, FUTURE CONSIDERATIONS, ISS Hockey, MCKEEN’S HOCKEY, NHL CENTRAL SCOUTING, ELITEPROSPECTS.COM, CONSOLIDATED RANKING, and by Bob McKenzie of TSN.CA. He is that good.

Alexis Lafreniere's @QMJHL career stats are ?. How do you think he'll do in the NHL? ? pic.twitter.com/8O3jyXNtgm

in 2017, he was awarded the QMJHL Rookie of the Year award and was named to the First All-Star team in his rookie season, among notable awards while playing three years in that junior league.

Lafreniere is no stranger to international play, as he was the youngest player selected for Team Canada’s U18 team at the 2018 IIHF World U18 Championships at the age of 16. He later captained Team Canada at the 2018 Hlinka Gretzky Cup tournament, despite being the second youngest on the roster and led the tournament with 11 points in five games, helping Canada win gold.

In December 2019, he was named to Team Canada’s 2020 World Junior Ice Hockey Championship roster. After a 4-point performance in the team’s 6â€“4 win against the United States in the tournament opener, Lafreniere suffered a lower-body injury the following game after colliding with the Russian goalie on a chance in the second period, Something that sent most of the nation into a frenzy.

He did return later in the tournament to help lead Canada to the gold medal and was named to the all-tournament team.

Even though it is still a longshot, it is still an intriguing thought to see this talented youngster playing in Madison Square Garden sometime in the near future.