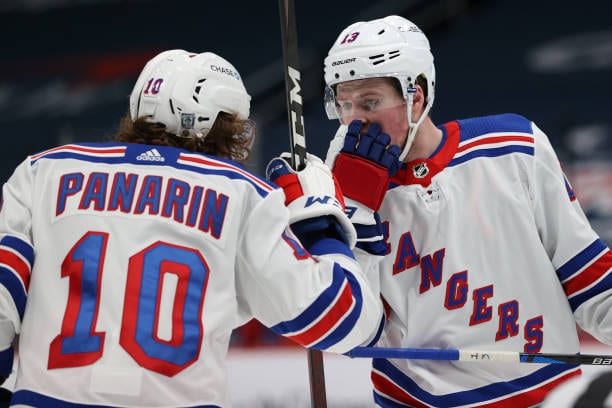 Igor Shesterkin recorded his first career NHL shutout in leading the New York Rangers past the New Jersey Devils 3-0. Shesterkin stopped all 27 shots that he faced.

Mika Zibanejad opened the scoring for the Rangers with a goal at 7:02 of the first period. He has registered 12 goals since Mar. 17, which is the most in the NHL over that span. He also has scored 12 goals in his last 15 games.

Artemi Panarin scored the second goal, playing in his 100th game as a New York Ranger. That goal gives him 138 total points, passing Mark Messier for the most points by a player in their first 100 career games with the Blueshirts.

Adam Fox had assists on both the Panarin and Zibanejad goals. Not counting what Victor Hedman did tonight, Fox leads NHL defensemen in assists (33) and points (38) this season.

Pavel Buchnevich added an empty-net goal to round out the Ranger scoring. Buchnevich’s score was the 20,000th goal in New York Rangers history. They join the Montreal Canadiens, Boston Bruins, Toronto Maple Leafs, and Detroit Red Wings to reach the milestone.

Shesterkin was outstanding in goal for the New York Rangers

In his post-game interview, Jacob Trouba had nothing but praise for his goaltender. “He’s been good. Ever since he got here, he has been a top-of-the-line goalie. Every night he seems to make some saves that you don’t expect a goalie to make and usually that is the difference in a game.”

“Igor has been great,” Zibanejad added in his post-game Zoom conference. “It was unbelievable last year as well. I feel that he gives us a chance to win games every night. He comes up with big saves at the right time.”

Shesterkin was pleased and humbled by his first career shutout. “It obviously means a lot,” Shesterkin said in his Zoom conference.  “I want to thank all the players who played in front of me and blocked shots all game, especially at the end when it was so meaningful to me to get this win and the shutout. They did it for me and I’m thankful.”

The two teams will meet for the second game of their four-game series Thursday night at MSG.