Shesterkin gets the shutout, Kreider scores in OT as Rangers defeat Flyers 1-0 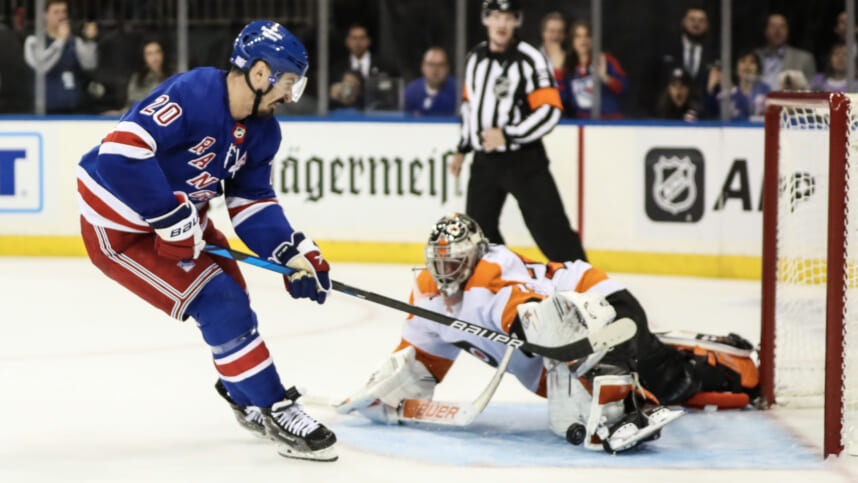 The New York Rangers won their third consecutive game with a 1-0 overtime win against the Philadelphia Flyers at Madison Square Garden.

The New York Rangers dominated the Philadelphia Flyers throughout the game last night but found themselves heading to overtime in a scoreless tie.

Flyers netminder Cory Hart had made 36 saves in the game, but the 37th shot-on-goal for the Rangers was the game-winner when Chris Kreider took a pass from Mika Zibanejad at center ice for a breakaway. The right-winger skated in on the Flyers netminder with under a minute left in the extra session and beat the goalie on the backhand to Hart’s left, sending the Garden fans home with a much-needed victory.

“I thought Mika was going to come with me,” Kreider said. “A little panic set in when I saw he was just giving it to me and letting me take it. I tried to shoot low blocker earlier in the game, so I figured I would try to fake it and go backhand. Thankfully it worked out. I thought we could have had a bunch more tonight, we just weren’t getting the bounces.”

Despite not scoring a goal, the Rangers dominated the second period as they outshot the Flyers 14-4 in the stanza. The Blueshirts frustration grew when the team hit not one but two posts in the second period that could have blown the game wide open. For the game, the team hit a total of four posts, a byproduct of the team’s struggle to score goals at five on five this season.

Igor Shesterkin remains undefeated in regulation games this year, 6-0-2. His point streak of eight games is the second longest to start a season by a Rangers goaltender and the longest since Gilles Villemure in 1971-72. He posted his first shutout of the season and ninth of his career while improving to 6-0-2. Since he entered the NHL in 2020-21, only three netminders have more shutouts: Jacob Markstrom (12), Ilya Sorokin (11), and Marc-Andre Fleury (10).

“We have been creating those chances the last couple games here starting with the Colorado game at home, but when the results don’t go with you, then we start questioning the amount of shots and the amount of chances,” said Rangers center Mika Zibanejad.

–Chris Kreider netted the lone goal in tonight’s game for his fourth goal of the season and second career overtime tally (Feb. 2, 2017, at BUF). Kreider’s goal was his 35th career game-winning goal, tying Steve Vickers for the eighth most game-winning goals in franchise history. Kreider has points in three-straight contests (2G-2A).

–  Mika Zibanejad notched an assist on Kreider’s game-winner, giving him six goals and seven assists for 13 points this season. Zibanejad’s 13 points have been spread across six games this season, all six in which the Rangers have earned their victories.

–   Gerard Gallant earned his 58th win with the Rangers, tying Red Sullivan for the 16th most by a head coach in team history.