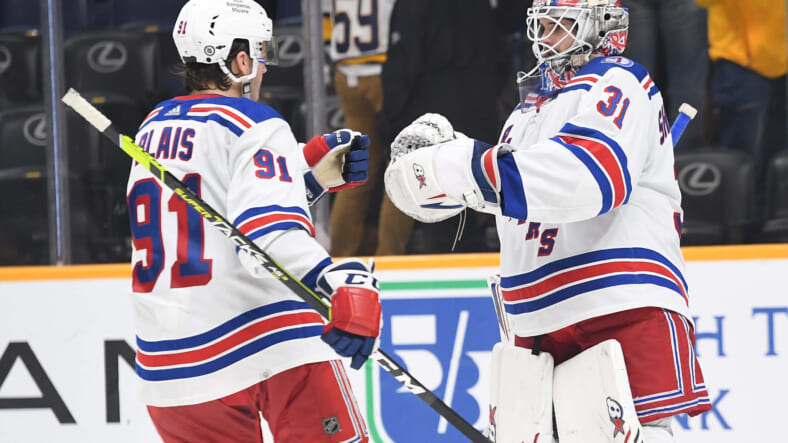 The New York Rangers ended the month of October with a 3-1 victory over the Seattle Kraken.

The New York Rangers had no right winning last night’s game in Seattle. If not for the outstanding play of Igor Shesterkin, the Blueshirts would be wondering what went wrong instead of enjoying a 6-1-2 record.

New York finished the first month of the season with a 6-2-1 record and 13 points, five of those wins coming on the road. It marks the Rangersâ€™ most points in the month of October since notching 16 (7-2-2) in the 2015-16 season. The Rangers have set a franchise record for the most road wins through the first nine games of a season and their five road wins in October are the most road wins in the month of October in franchise history.

Shesterkin made 31 saves in the remand 3-1 victory on Sunday night.  He earned his fifth win in his seventh start of the season. Shesterkinâ€™s five wins are tied for the third-most in the NHL. On the road this season, Shesterkin is an NHL-best 4-0-0 with a .970 SV%.

The Rangers were outshot 32-18 for the game including an outstanding 13-2 in the second period.

Kreider lights the lamp in the first period

Chris Kreider netted his seventh goal of the season scoring early into the first period in the Ranger’s first trip to Seattle since that city was awarded an expansion team.

The Rangers took the ice in the second period flat. They were outplayed in all areas of the ice and if not for Shesterkinâ€™s brilliance the score would have been worse at the conclusion of the second period than the reality of a 1-1 contest.

A more even third period allowed the Rangers to grab their second lead of the game when Adam Fox took a pass from Artemi Panarin and wristed a shot past the Kraken goalie Philipp Grubauer.

It was Foxâ€™s second goal of the season.

Barclay Goodrow ended the night with an empty netter.

The Rangers will visit the Vancouver Canucks Tuesday night.