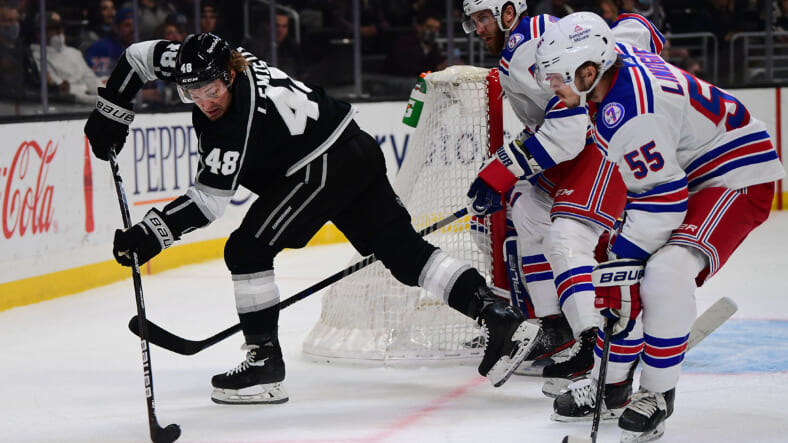 The New York Rangers found themselves in a hole 55 seconds into their game against the L.A. Kings and suffered a 3-1 loss.

The New York Rangers came out flat at the start of the first period and paid dearly for it when Philip Danault scored his seventh of the year 55 seconds into the hockey game. Blake Lizotte made it 2-0 at 3:41 of the first with the Kings going on to win the game 3-1.

The Covid ghost continued to haunt the Blueshirts with the announcement that Barclay Goodrow entered Covid protocol prior to the start of the game.

Kris Knoblauch arrived in Los Angeles to stand behind the bench for the missing Gallant. He had a busy few days of travel with his Hartford Wolf Pack playing in Utica, N.Y. over the weekend, then heading back to Connecticut. Before he could get any rest he found himself on a cross-country flight to meet up with the Rangers.

The night started with the return of Artemi Panarin who missed four games due to protocol. He returned to the left-wing, with Ryan Strome in the middle and Alexis Lafreniere on the right side.  The line was on the ice for all three goals scored against the Rangers Monday night.

The second line wasn’t the only reason the team suffered their 10th loss of the season. Defenseman K’Andre Miller had another inconsistent game, coughing up the puck which lead to theKing’s first goal of the game. It was the second consecutive game a Miller turnover resulted in the opposition scoring a goal.

The Rangers finally scored a goal when Mika Zibanejad (13 goals) deflected a Filip Chytil shot to cut the Kings lead in half to 2-1 at 11:27 of the third period.  Zibanejad’s goal was his eighth goal in his last nine games and his fifth goal in his last five games.

The Rangers had a game plan heading into the game, but as Chris Kreider explained to Dan Greenspan of NHL.com the team was not smart. He took the blame for the team’s overall performance on Monday night.

“We talked about before the game what they do in the neutral zone, and we just decided to work hard and not smart,” Rangers forward Chris Kreider said. “We need to come with speed, support each other, and we made it really easy on them walking out of the zone, and then ultimately trying to get our feet going a little bit too late, and getting beat and giving them rushes and letting them advance the puck up the ice.”

“I think that’s what you saw at the beginning of the second period, and ultimately, it’s on us to settle down and regroup and commit to doing the right things to advance the puck and play the right way. We did that a little bit too late when we’d already given up the lead at that point. You didn’t nip it in the bud early in the game, so it’s on us. It’s on me.”

The Rangers will have the day off on Tuesday. Their next game is Thursday night in San Jose.