The New York Rangers play an actual hockey game on Tuesday night when they host the Boston Bruins playing for the first time since Feb.1.

When we last saw the New York Rangers they were celebrating their 30th win of the year as they beat the Florida Panthers 5-2.

The long layoff was due to a combination of the NHL All-Star break and a stretch of time where the Olympic schedule was set to take place. The NHL used that open time to make up games that were canceled due to COvid-19 issues.  The Rangers only needed to make up three of those games, hence their long 14-day break between games.

In that time, the Pittsburgh Penguins now sit atop of the Metropolitan Divisions with 68 points, Carolina Hurricanes with 67 points. The Blueshirts are in third place with 64 points and have two games in hand over the Penguins.

The Standings heading into the final two and a half months of the season have the Rangers sitting in a great position that should result in the team competing in the Stanley Cup Playoffs. 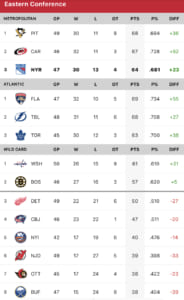 Their 64 points give them a 14 point lead over the first team outside of the wild card battle, the Detroit Red Wings.  The Blueshirts have 35 games remaining on their schedule and will have some issues to overcome if they are to continue their successful campaign.

The two games they play this week will be the last time they play less than three games in a seven-day period for the remainder of the season.

The Rangers received some good news when defenseman Adam Fox was removed from the IR list and returned to practice both the team last week.  Defenseman Patrick Nemeth is also with the team but his status of when he will return is uncertain.

General manager Chris Drury recalled Zac Jones on Sunday leading to speculation that he could be paired with Mathew Schneider for Tuesday night’s game.

Kappo Will be out for at least another month with an upper-body injury in an announcement made via Dan Rosen on Saturday. Kakko hasn’t played since being injured in a game on Jan.21. Morgan Barron was recalled from Hartford on Saturday as well.

The lines in practice on Monday morning were ;

The NHL trade deadline is on Mar.21 with the Blueshirts standing on the buyer’s side of the fence for the first time in several seasons.

There remains a need for a top-six forward, a veteran defenseman, and possibly a backup goalie should the club decide to move Alexandar Georgiev. The team must address Ryan Strome’s contract with his UFA status when this season concludes.