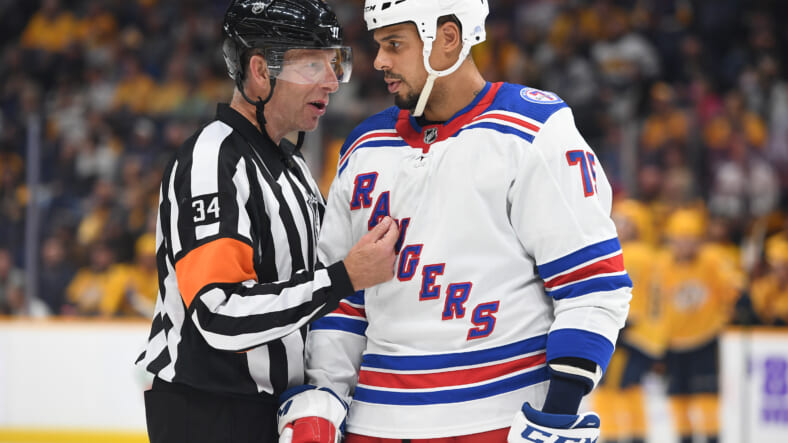 New York Rangers’ Ryan Reaves was on the ice with his teammates at practice on Monday, but his return to the lineup is still unknown.

Ryan Reaves has become an integral part of the New York Rangers lineup. He tries to be the ultimate team player every time he is with his teammates.

Case in point, last Monday night in a game against the Calgary Flames. Reaves suffered a lower-body injury early in the game, but instead of retiring to the locker room as most athletes would do, he insisted to stay on the bench to support his team.

Currently, on the injured reserve list, Reaves returned to practice in Vancouver Monday wearing an orange non-contact jersey. Looking to help his team in any way he can, and is unable to fully participate in the practice, Reaves played the role of the opponent using his stick to disrupt the play.

â€œI was happy to see him out there skating today,â€ head coach Gerard Gallant said per Mollie Walker of the New Yokr Post. â€œHe lasted most of the practice, so thatâ€™s a good sign. Yesterday I was a little concerned, but he looked a lot better. I donâ€™t know when heâ€™s going to play, but it was a step in the right direction.â€

Gallant went on to say,

â€œReavo is one of our leaders, heâ€™s a guy that came to this team and he makes us a more aggressive team and heâ€™s a character in the dressing room, the guys really like him. He wants to be out there. We tell him, â€˜Make sure youâ€™re ready to go.â€™ I thought today he looked much better than he did yesterday. So thatâ€™s a positive for us and our group.â€

Reaves Brings His ‘A’ Game

Reaves has fit in seamlessly with the club since his first practice. He has been seen working with the younger players on the team with their positioning on the ice and even added a little of his own flair by showing players the “physical side” of playing in the NHL.

How much do his teammates appreciate the energy Reaves brings to the ice? Look no more than his pregame ritual where he releases the Rangers to the ice.

His enthusiasm is infectious through the lineup. Head coach Gallant looks to get him back in the lineup as soon as possible but until then Reaves will do whatever he can to help his team win.

The Rangers play the Vancouver Canucks on Tuesday night. The game can be seen at 10 p.m. on MSG Networks.