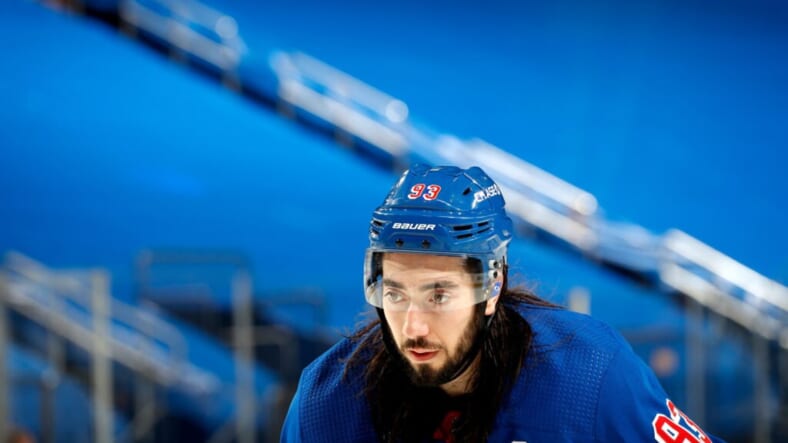 Mika Zibanejad of the New York Rangers in action against the Buffalo Sabres on March 2, 2021 (Photo by Jared Silber-NHLI via Getty Images)

On an unusual night, the New York Rangers showed some unusual offensive prowess in beating the Philadelphia Flyers 9-0.

What made this game unusual was that head coach David Quinn and assistants Jacques Martin, David Oliver, and Greg Brown were not available for the game. They are were out due to the NHL COVID-19 protocol guidelines.

The Rangers responded in a big way with their 9 goal output. In his post-game Zoom interview, goalie Alexandar Georgiev said of the nine-goal effort: “I have no words, to be honest. It was surreal. I obviously tried to focus on my job but you could not ignore how unbelievable the guys were playing.” Georgiev stopped all 26 shots to earn the shutout victory. This was a big win for the young goaltender after being pulled in his last two games.

Mika Zibanejad was nothing short of brilliant in tying an NHL record by scoring six points in the second period of the New York Rangers’ win. Zibanejad scored a natural hat trick and had three assists to join former New York Islanders center Bryan Trottier as the only players to score six points in a period of an NHL game.

Pavel Buchnevich scored four points (two goals, two assists) after missing the game Monday, a 5-4 overtime loss against the Flyers because he was on the NHL COVID-19 protocol list. Buchnevich was only told of him being eligible to play this morning. After the game, he told the media that “I don’t know what was going on there, I have the antibodies.”

In his post-game Zoom conference, Zibanejad talked about how the team came together after hearing about the coaches who were placed on the list. “You get a little shock when you hear that, you just have to be able to adapt. We came together as a group and played for each other.”

They will need to come together regardless of who is on the bench as the Rangers travel to Washington on Friday and Saturday to take on the division-leading Capitals.