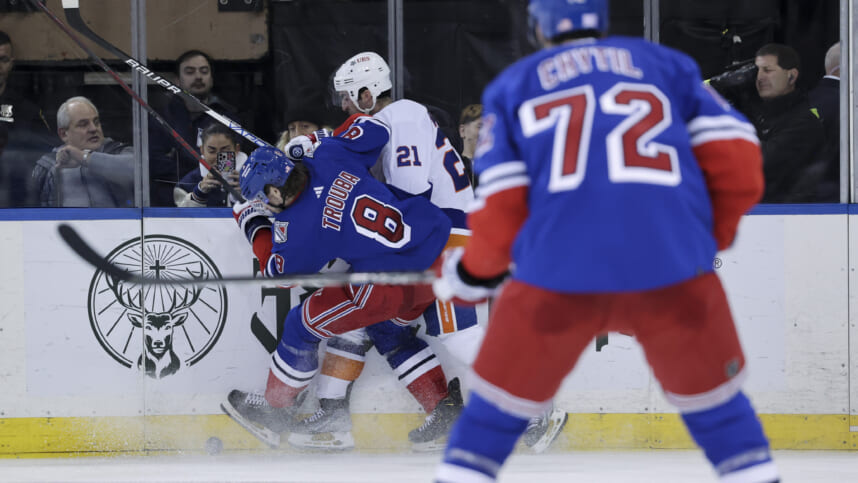 The New York Rangers blew another two-goal lead on Tuesday night as questions continue to grow.

The New York Rangers find themselves in a tough fight to find a way to score goals, play better defense and win hockey games. It’s a fight with themselves as this club has been unable to get out of its own head and has stumbled out of the gate with a 6-5-3 record.

Words like panic, concern, scoring, and defense have become the forefront of the team’s vocabulary. An inability to play a complete 60-minute hockey game has become the leading culprit on a team that is struggling to find its identity.

“I don’t think it’s a personnel thing,” Vincent Trocheck said ollowing Tuesday’s game. “I truly believe in this group a lot. I know what kind of team we have, and I know what we’re capable of. It’s just a matter of putting together a full 60-minute game. It’s just a mental thing for us right now. We’ve got to get over that hump. We’re in a little bit of a rut. It’s a confidence thing for us.”

For the second consecutive game, the Blueshirts had a two-goal lead and watch it disintegrate into two losses (0-1-1).

The answer to the question of why this team has lost its confidence has many levels to unveil.

In the Islanders’ 4-3 win, the Rangers had a solid first period, one which saw them take a 2-1 lead into the first intermission. The lead grew to 3-1 22 seconds into the second period as the Blueshirts dominated the stanza outshooting the Islanders 17-6.

Then the wheels fell off the cart. With another bad turnover 14 seconds into the third period, the Isles cut the lead to 3-2. Things continue to get worse as the team gave up two more third-period goals.

Rangers superstar Artemi Panarinn admits the team is feeling the stress of their recent struggles.

“Obviously after a loss there’s a sense of urgency, but I can’t say that when you’re leading 3-1 you feel a lot of stress,” Artemi Panarin, who recorded assists on the Rangers’ second and third goals while on the power play in the second period, said with the help of an interpreter. “After the last few games, where you’re trying to do well but you’re game is just not up to par, definitely a bit stressful.

The Rangers had trouble scoring at five-on-five, managing just one goal at even strength. Two power-play goals in the second period completed the team’s scoring, which is another reason the team took the loss.

Head coach Gerard Gallant tried to shake his lines up to find some scoring magic for Tuesday’s game but despite 40 shots on goal, scoring production was nonexistent at even strength. The lineup saw Jimmy Vesey on the right of Trocheck and Lafreniere and Kreider on the third line with Chytil and Kravtsov.

An obvious hit to Kreider, but the head coach needs to get him going. He did score a power-play goal on Tuesday and seemed more involved in the offense.

The defense was running around often. No more so than for the winning goal. Islanders forward Oliver Wahlstrom got away with an obvious trip on Kaapo Kakko, which led to the go-ahead goal from Islanders captain Anders Lee. Following the non-call, the Rangers seemed to stop skating apparently waiting for a call that never materialized. Lee got behind both Trouba and Miller and found himself alone on Igor Shesterkin.

A missing Ryan Lindgren was evident throughout the game.

The defense of Jones, Hajek, and Schneider played fairly well as they rotated with different partners throughout the game. But it’s apparent that the team needs to find a veteran defenseman with their inability to give Jones an opportunity to make mistakes.

The club traded Nils Lundqvist earlier in the year with full confidence that Jones could do the job, yet he has been scratched and or benched too often. If the coaching staff is unwilling to let Jones “learn on the Job,” then a veteran needs to be brought in.

Shestrkin has seen mortal this year early on. He had a great start but has allowed a few goals he would absolutely want back. This year would have been enjoyable to see the team win games without relying upon Shesty playing the perfect game every night, but to this point, that has not been the case.

Halak struggled early on but played his best game of the year against Detroit on Sunday, making 33 saves though he took the OT loss 3-2.

A two-game road trip awaits the club. A visit to Detroit on Thursday and Nashville on Saturday could help the Rangers find that bonding the team is lacking. The team is 3-2-0 on the road this year.

Sometimes the road game attitude is the perfect fix for a struggling team. This club could use a road-warrior mentality to help get them out of the bad rut they find themselves in.