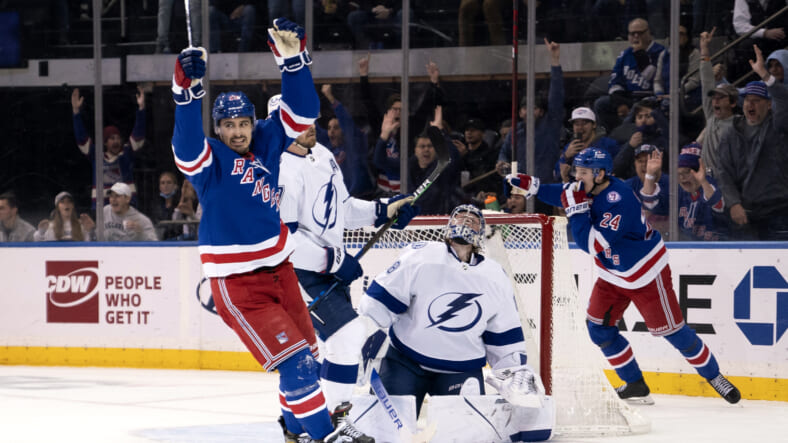 The New York Rangers shut out the Tampa Bay Lightning led by a 38 save shutout by Igor Shesterkin 4-0 at Madison Square Garden on Sunday afternoon.

The New York Rangers began 2022 the same way it concluded 2021, be defeating the Tampa Bay Lightning 4-0 sparked by a Mike Zibaenjad hat trick and a 38 save performance by Igor Shesterkin.

Chris Kreider had three assists, Ryan Strome tallied his seventh of the season and Adam Fox added two assists as the Rangers swept the Lightning in their home and home contest.

The Blueshirts were forced to play without Artemi Panarin who was placed in Covid Protocol prior to the start of the matinee game.  Alexis Lafreniere took Panarin’s spot on the right side of Strome and Barclay Goodrow.

Speaking of the absence of Panarin, Zibanejad said to Corey Long of NHL.Com,

“When he’s been out a couple games here and there … you’ve got to step up,” Zibanejad said. “He scores goals and makes a lot of things in the offensive zone happen. When a guy like that is out, you just want everyone to chip in a little bit more.”

The Rangers scored on their first two power plays (both by Zbanejad) to take a 2-0 lead and never looked back ending the first period up 3-0.

Zibanejad completed his hat trick off of a beautiful goal mouth pass from Chris Kreider. Kreider collected three assists/points in the win and has notched nine points (2G-7A) in his last five games, including two three-assist/point games in that span. Two of Kreider’s three assists came on the power-play, giving him 16 power-play points on the year which is the third-most in the NHL.

Shesterkin recorded the fourth shutout of his career and the second of the season. Shesterkin improved to 9-0-0 when making 38 or more saves. Shesterkin earned his 15th win of 2021-22 (21 GP). He required the second-fewest games in a season to reach the mark with the Rangers behind only Gilles Villemure (20 GP in 1971-72). Shesterkin has won six of his last seven starts and nine of his last 11 starts.

The Rangers will take on the Edmonton Oilers Monday night at the Garden.